Africa is a fantastic continent for once-in-a-lifetime experiences. Because of this, many people choose it as a honeymoon destination, or somewhere to visit after retirement. Options in Africa include spotting the Big Five on a wildlife safari and exploring the colourful souks of Morocco. Moments of wonder and vibrant colour are guaranteed wherever you decide to visit on an Africa tour.

Nature is everywhere in eastern and southern Africa with lush rainforests, endless plains and golden deserts providing plenty of opportunities for adventure. To the north of the continent, ancient treasures abound in Egypt and Morocco, from the Pyramids of Giza to the fortified kasbah of Ait Benhaddou.

When most people think of Africa, they think of safaris and the Big Five (lion, leopard, buffalo, rhino and elephant). Countries such as Kenya, Namibia and Uganda all offer travellers something different. It’s possible to drive through game reserves on safari or explore the Ugandan jungle to see gorillas in the wild, for instance. Kruger National Park in South Africa is one of the best places to see the Big Five in the flesh.

One for the bucket list, sa-venues.com states: “The largest game reserve in South Africa, Kruger National Park is larger than Israel. Nearly 2 million hectares of land, stretching for 352 kilometres (20,000 square kilometres) from north to south along the Mozambique border, is given over to an almost indescribable wildlife experience. Certainly, it ranks with the best in Africa and is the flagship of the country’s national parks – rated as the ultimate safari experience.”

Whale watching is also popular with travellers on an Africa tour. Sightings are possible along the South Africa coastline between June and November. This is because it is during these months that the mammals make their way north from Antarctica to warmer waters.

For something spectacular, Victoria Falls in the Zambezi River between Zambia and Zimbabwe is a must-visit on any Africa tour. According to  Zambia Tourism, “It was described by the Kololo tribe living in the area in the 1800s as ‘Mosi-oa-Tunya’ – ‘The Smoke that Thunders’. Columns of spray can be seen from miles away as, at the height of the rainy season, more than five hundred million cubic meters of water per minute plummet over the edge, over a width of nearly two kilometres, into a gorge over one hundred meters below.”.

Hidden amongst the coastal desert of Namibia are the biggest and oldest sand dunes in the world. With sand over 5 million years old, it visibly changes colour as it spreads across the desert. Climbing the dunes and sliding back down again is a popular activity. And couples will love watching the sunset from the top for a truly romantic moment.

3. Explore Africa by boat on a cruise

One of the best ways to experience Africa is to take a cruise. For example, a Nile cruise in Egypt is a great way to discover some of the country’s ancient wonders. Guided tours mean you can see everything the country has to offer, much of it from the water! A luxury Nile cruise with On The Go Tours takes you to sights including Philae Temple in Aswan, Kom Ombo and the tomb-strewn Valley of the Kings in Luxor.

But Africa’s cruising options are expanding all the time, as travellers want to see different countries and sights.

“Africa has become an increasingly popular choice of cruise destination in recent years,” said Robin Maclear, Managing Director of The Cruise Line. “Gone are the days when only South Africa and calls to places such as Cape Town were in the spotlight; the whole continent has much more to offer, with the diversity between the north and south offering an abundance of enriching travel experiences.”

Cruising Africa is a veritable voyage of discovery, wherever you choose to go.

4. Shopping in souks and markets

Vibrancy in sights, sounds and smells make the souks and markets in Africa an enjoyable assault on the senses. Perhaps one of the most famous is Djemaa el Fna medina in Marrakech, Morocco. The square comes alive from mid-afternoon and is best viewed from one of the rooftop bars in the area. However, the largest souk is found in Agadir, along the southern Atlantic coast of Morocco.

These colourful bazaars contain riches of spices and souvenirs. They provide the perfect opportunity to get lost among the narrow alleys as you search for bargains. Haggling is all part of the fun and is fully expected. But The Culture Trip advises you to keep things light-hearted and friendly while negotiating and, if you can’t settle on a price, it’s OK to walk away. However, don’t agree on a price and then not go through with the sale. 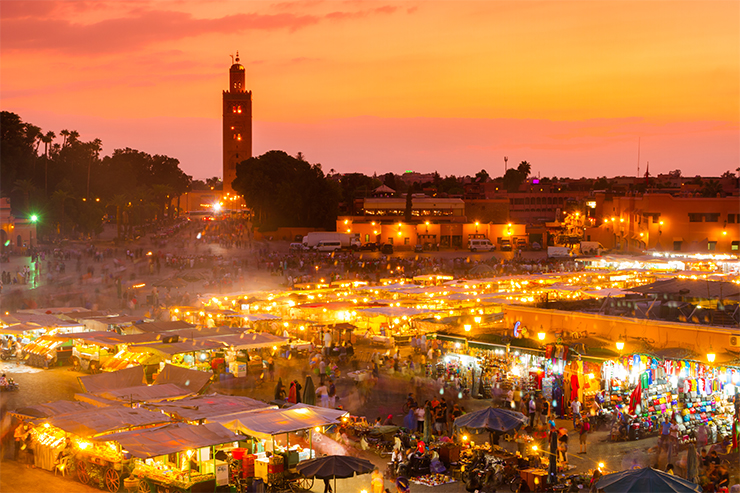 You are spoilt for choice when travelling on an Africa tour, the continent being as diverse as it is large. On The Go Tours offer a wealth of trips to Africa. With group tours to Morocco and Egypt, as well as safaris across much of east and southern Africa, there’s sure to be the perfect trip for you.

Kate Sheppard is a mum of two, living in Sussex, UK. Kate enjoys writing about all things parenting, lifestyle and travel. Connect with Kate on Twitter: @KateSheppard90 and Pinterest: @katesheppard90