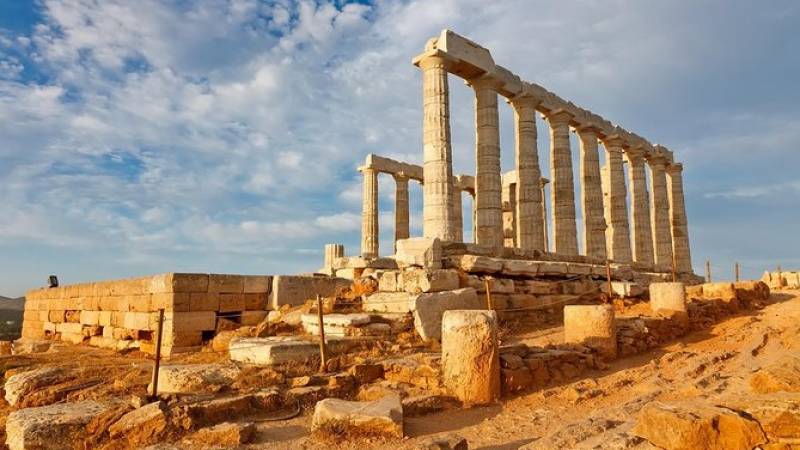 from USD $104.16
From the Acropolis to Omonia Square, you'll see with this full day trip all the famous sites of ancient and modern Athens. Offering a perfect overview of the modern city, this guided tour will help you get your bearings if this is your first visit to Athens.
BOOK WITH CONFIDENCE: As members of ABTA and ATAS we are 100% financially bonded. You can book your day trip with us in absolute confidence, no matter where in the world you are.

The Athens full-day tour depart for a photo stop at Panathinaiko Stadium where the first Olympic Games took place in 1896.

Proceed, passing by Zappeion and Temple of Olympian Zeus.  You will then drive past the Athens Trilogy which includes the University of Athens, the Academy of Athens, and the National Library. Continue passing by National Garden, Hadrian’s Arc, St. Paul’s Church, Parliament, Tomb of the Unknown soldier, Schliemann’s House (Numismatic Museum), Catholic Cathedral,  Old Parliament, Constitution Square ,Russian Orthodox Church, and finally Acropolis (including also Parthenon, Erechtheion, Propylaea, Temple of Athena Nike, Areopagus). Stroll up to the UNESCO-listed site that served as the ancient citadel, and tour the buildings as you hear how they reflected Athens’ prosperity in the 5th century BC.

Continue the expert guided Athens sightseeing and  Acropolis museum one day tour with a pleasant short walk passing by Herodion and Dionysos Theater, in order to visit the  Acropolis Museum. Avoid and skip the lines of the new museum. Main attractions such as votives,  statues from archaic period, Caryatids, and of course the Parthenon hall with the metopes, the pediments and the frieze will impress you.

After a morning tour full of images continue in a local restaurant under the slopes of Acropolis for lunch. After lunch depart for a wonderful drive along the scenic coastal road which affords a splendid view of the Saronic Gulf, passing through some of Athens most beautiful suburbs (Glyfada, Vouliagmeni, Varkiza) to Cape Sounion. Cape Sounion is only 45 miles (70 kilometers) from Athens, making it the perfect lazy afternoon tour destination. The Cape's Temple of Poseidon is perched on a rocky hilltop overlooking the sea. The view across the Aegean is magnificent with one of the most breathtaking panoramic views in the world, extending all the way to Kea and the Peloponnese on a clear day. The Temple of Poseidon was built in 44 B.C., and many of its original Doric columns are still standing. One of the columns has a graffiti left by none other than Lord Byron in the early 1800s. The precipice is a sheer 197 foot drop to the sea.

“
Excellent tour of Athens. Only had one day in Athens, this was the perfect tour to see the highlights.”
Michelle J • Submitted 08 Oct 2019

“
We thought this tour was extremely enlightening and included so much important history, but we were not happy with the organization of the tour. There was too much confusion in organizing the various buses that had picked up people going to numerous tours and it took almost 30 minutes to get everybody to the correct bus and on our way. It would have been much smarter to just ask people to raise hands going on one tour and direct them to their bus or just have people meet at appropriate place. We ended have a much later day because of the mass confusion”
Vivian U • Submitted 01 Oct 2019

“
We really enjoyed the tour and our guide was amazing he knew everything and he was lovely and polite . Acropolis was very crowded and many people slipping over . Our guide managed to keep us all together . The lunch was really nice all we had to buy was the wine and beer . I highly recommend the tour”
Mrs B A J • Submitted 19 Sep 2019

“
I was in Athens for the day travelling solo and booked his tour to see the sights with the little time I had. Whilst the tour started off slow in the morning, with all the hotel pick ups and arrangements the rest of the day was well balanced out. Our tour guide was very knowledgeable and funny. He was well educated in the history of the historical sights and able to answer everyone’s questions. I was pleasantly surprised with the lunch we sat down at a nice restaurant and had a choice of mains. The food was traditional Greek food and tasted great. I would defiantly recommend this tour.”
kathryn A • Submitted 05 Sep 2019

“
This was a very good tour for learning so much about Greek culture and history. Our Guide, Stavros, has encyclopedic knowledge, and showed a great love and passion for his country. The early was good because we arrived at the Acropolis before the major crowds, (it was still extremely busy nevertheless, but was obviously becoming more so as we were leaving). Lunch was good - not just a buffet or set menu, like some other tours I've been on, but with main course choices.) The drive out to the Temple of Poseidon was picturesque along the coast and provided a welcome chance to "chill".”
Martin K • Submitted 29 Jul 2019

“
Marianne my tour guide was fantastic. So knowledgeable. The morning really focused on the acropolis and the museum while the afternoon we went to the Temple of Poseidon. Beautiful.”
Lisa H • Submitted 29 Jul 2019

“
This tour provided the highlights of Athens and was very organized in a crowded visit. the guise was very well versed and knowledgeable”
Gordon W • Submitted 09 Jul 2019

“
Anastasia was the best tour guide I've ever seen. She was patient, informative and truly has a passion for her city.”
Christopher K • Submitted 03 Jul 2019

“
What a full day of fun, adventure, and experiences! This full day tour really covered so many spots in Athens that we would not have seen otherwise! If you like history and your time in Athens is limited jump on this tour for sure! You spend the whole day seeing so many different things! The tour guide was very informative and nice to the group. She made sure we were feeling okay and were enjoying our time and understand everything she was saying the whole time. The bus was very comfortable as well. Would DEFINITELY recommend this tour!”
larajeeg422 • Submitted 27 Jun 2018

“
The guide was excellent----she worked very hard, and was able to answer all of the group's questions----I recommended this tour to a couple going to Greece in May----Very good experience---Thanks”
william s • Submitted 17 Dec 2017

“
Our tour guide was Anatasia. Very nice, very patient and very informative. We learned so much and everything was a suitable pace for us. We did the lunch and it was very delicious and portions were large!”
vivian_vu4 • Submitted 31 Oct 2017

“
Great guide, the lunch was exceptional and the tour locations were what we wanted to see on a tight timeframe. The bus seating for taller people can be better.”
Daniel N • Submitted 17 Oct 2017

“
I highly recommend taking this tour - great guide and fantastic all around.”
Karen D • Submitted 11 Oct 2017

“
This was a long hot day but the guide was excellent and we were able to see what we wanted to see. The museum was fascinating and gave our visit to the Acropolis context.”
gloriaeby20 • Submitted 10 Oct 2017

“
My wife and I went to Athens for a two night stay which allowed us to take the full day tour. Excellent tour, lunch was very good and filling giving you a real taste of Greece, and of course the Guide was wonderful! We saw all the major things that you would want to see in Athens for such a short stay. With limited time this was the only to do it.”
John H • Submitted 05 Oct 2017

“
What a great day we had. Just fantastic. Great tour guide and such an amazing place.”
Daryl K • Submitted 12 Sep 2017

“
The tour for me was worth it. The Stadium was without entry altho we stopped for a few minutes. Great info as we made our way up to the Acropolis which was the bulk of the first half day. Soon was the 2nd half and the Temple of Poseidon. As impressive as The Acropolis. The highlight of the tour was Maria our Guide. I booked based on recommendations about her and I was not disappointed! Highly recommend!”
Ricardo W • Submitted 21 Aug 2017

“
The tour was great. Informative, well paced and Anastasia, our guide, lovely and enthusiastic. Lunch was delicious and the coastal tour a must.”
Stacey B • Submitted 10 Aug 2017

“
Great tour. Saw the highlights of Athens in the morning. The Acropolis and Olympic Stadium. Visited the Acropolis Museum. All worthwhile and very interesting. The afternoon begins with a beautiful coastal drive arriving at the Temple of Poseiden. Our guide, Marianna, was tireless and was explaining, educating, discussing the sites all the way back to the hotel after 8 hours. I would highly recommend the tour.”
Ron B • Submitted 09 Aug 2017