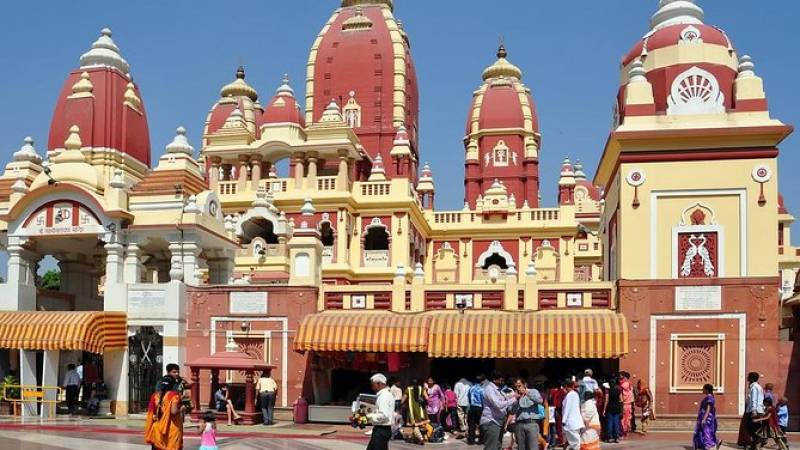 from USD $61.60
This private tour of Delhi’s temples packs in main highlights into just one day—perfect for travelers short on time. Your private guide shows you some of India’s most stunning and spiritual spots, including ISKCON temple, Lotus Temple, Chattarpur Temple, Gurudwara Bangla Sahib, Akshardham Temple, and Birla Mandir (Lakshmi Narayan Temple). Plus, round-trip transport from Delhi or Gurugram (Gurgaon) City is included to ensure a stress-free trip.
BOOK WITH CONFIDENCE: As members of ABTA and ATAS we are 100% financially bonded. You can book your day trip with us in absolute confidence, no matter where in the world you are.

This temple is dedicated to Lord Krishna and Radharani of Hinduism. The temple was built with stone and marble. This latticed tower temple is located at the highest point of the hill. You can find many carved wood and stone carvings in the temple walls, which explain the mythological stories of Hinduism.

Designed for tranquil worship, Delhi's beautiful Lotus Temple (Bahai Temple) offers a rare pocket of calm in the hectic city. This architectural masterpiece was designed by Iranian-Canadian architect Fariburz Sahba in 1986. It is shaped like a lotus flower, with 27 delicate-looking white-marble petals. The temple was created to bring faiths together; visitors are invited to pray or meditate silently according to their own beliefs.

Delhi’s second-largest temple (after Akshardham), this impressive sandstone and marble complex dates from 1974, and is dedicated to the goddess Katyayani (one of the nine forms of Parvati). There are dozens of shrines with towering South Indian gopurams (temple towers), and an enormous statue of Hanuman stands guard over one part of the complex.

This magnificent white-marble gurdwara (Sikh temple), topped by glinting golden onion domes, was constructed at the site where the eighth Sikh guru, Harkrishan Dev, stayed before his 1664 death. As at all gurdwaras, free meals are served to pilgrims daily. Just inside the entrance to the complex is a small museum, chronicling the history of Sikhism and its gurus and martyrs.

This Orissan-style temple was erected by the wealthy industrialist BD Birla in 1939; the main shrine honors Lakshmi, goddess of wealth. Gandhi inaugurated the complex as a temple for all castes; a sign on the gate says 'Everyone is Welcome'.

Traveler pickup is offered
The airport, railway station or your hotel in Delhi or Gurgaon (Gurugram) or Noida. For airport pick-up, please provide arrival information during booking.

Scoring an average traveller rating of 4.5 out of 5 based on the last 8 recent reviews

“
Excellent tour - saw many temples and the guide was very knowledgeable and friendly.”
Plum62 • Submitted 30 Dec 2017

“
Amazing tour. Totally recommend it. The choice of temples to visit is carefully planned, giving an array of spiritual experiences that no visitor should miss, plus they are breathtaking. Additionally, the guide is very knowledgeable making it a great experience.”
julian • Submitted 11 Oct 2017

“
Amazing tour. Totally recommend it. The choice of temples to visit is carefully planned, giving an array of spiritual experiences that no visitor should miss, plus they are breathtaking. Additionally, the guide is very knowledgeable making it a great experience”
julian • Submitted 03 Oct 2017

“
It was my first time in India, and my colleague and I decided to do the all-day tour of the Sacred Temples. It was really amazing. Our guide was very knowledgeable and provide wonderful history, insight and context around each temple and the religions that founded them. You stay in Delhi so the trip is very manageable. Lunch is also included in the cost, plus the guide stops at a government sanctioned craft store for anyone that wants to pick up gifts. Frankly, the store is grossly overpriced in my opinion and the merchants are a bit pushy I'd recommend the Khan market instead for your shopping needs.. Bottom line: I'd highly recommend this tour to anyone interested in temples in Delhi. I plan to return to India in a few months and will be planning another tour through this company, without question.”
Thomas M • Submitted 09 Aug 2017

“
I would highly recommend this tour to anyone visiting New Delhi. We were fortunate to have a young man to lead our tour. He was extremely informative and knowledgeable of all the areas we visited. Extremely prompt, and explained each temple to us in full detail and when each temple was visited, informed us of the next temple. He did not rush us through the sites and took pictures for us along the way. After the final temple, At the end of the day, I asked to also stop at the Sacred Heart Cathedral and this was accommodated as well. I would book this tour again when I visit New Delhi again. Photos Optional”
Curt428 • Submitted 08 Feb 2017

“
This was an excellent tour with a great guide. Prashant was very knowledgeable and peppered the information he gave us with stories and a few jokes. It's wise to get a good night's sleep before because there will be a good amount of walking and listening to do, but it is definitely worth it! Those who really like learning about the history and culture of the sites will enjoy this tour the most, but probably anyone would enjoy these sights and the experience. We had a terrific time and found it very worthwhile.”
Bonsai81 • Submitted 29 Oct 2016

“
The tour was incomplete. They díd not take us to all the temples in the itinerary. They took us to a shop we dont know why and what for. Speaking spanish guide was TERRIBLE and very unpreparated. Guide was not polite. Was always in a hurry, trying to finísh, I guess they are tired of going to same temple again and again and dont think how much effort takes for us to take this vacations and fullfilt these Dreams. I hardly NOT RECOMEND THIS TOUR. my money was NOT well spend. So sad.”
Ana S • Submitted 01 Mar 2018