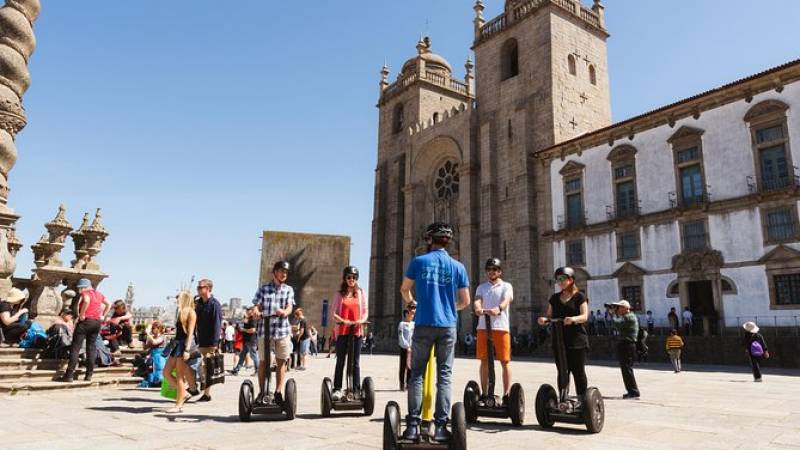 from USD $78.42
Explore Porto on a self-balancing electric Segway and follow a local guide through the city’s UNESCO-listed Ribeira neighborhood.

For your safety, we will start with a briefing about how to ride the segway. With the helmet on, the super guide/storyteller will take you the most emblematic neighborhoods and show you the people of Porto and the most picturesque corners this city has to offer.

The experience is available for 3 hours as a public or a private tour. You will feel our love for Porto Amazing City. Come join us!

*Public or Private Tour. Choose whats suits you the best!!

TOUR HIGHLIGHTS:
Cordoaria Garden
Clérigos Tower
Gomes Teixeira Square
Lello Bookstore
Cândido dos Reis and Galerias de Paris streets
Aliados Avenue
São Bento train station
Porto Cathedral
Bridge D. Luís
Ribeira
BOOK WITH CONFIDENCE: As members of ABTA and ATAS we are 100% financially bonded. You can book your day trip with us in absolute confidence, no matter where in the world you are.

A French-influenced station building designed by the Portuguese architect José Marques da Silva. It is especially famous for its tile panels.

Considered one of the ex-libris of Porto, the Church and Tower of Clérigos (18th century) are a remarkable architectural complex located in the in the heart of the city.

Due to its unique historic and artistic value Lello is recognized as one of the most beautiful bookstores in the world. Its stairways served as inspiration for Hogwarts magical stairs in the Harry Potter books.

The bridge was built in 1886 by the Belgian engineer Théiohile Seyrig, and connects the cities of Porto and Vila Nova de Gaia.

Piece of continuous urban fabric that makes up the main avenue and city centre.

The second oldest neighbourhood of Porto is still one of the most traditional with its small alleys and colourful houses.

The Cathedral of Porto, located in the heart of the historical centre of the city is one of the main and oldest monuments of Portugal.

Two of the most famous streets in Porto, often associated with the city’s nightlife.

Mentioned in regal letters from 1389, this is considered to be one of the oldest squares in the city.

The most prominent gothic monument in Porto is also noted for its outstanding baroque decoration.

“
This was our first Segway tour and we all loved the experience. It is especially a great way to see Porto since it is so hilly. The tour gave us an excellent overview of the city and the sites, and we then returned to those areas we wanted to enter and spend more time at. There was a mix-up in the beginning in that Viator printed the wrong address for the meeting spot. The company paid for our Uber to the correct location and lengthened the tour so we did not miss anything. Our tour guide was patient (I was slow in the beginning to get comfortable on the Segway), fun, and very knowledgeable. Definitely recommend the tour.”
Rebecca E • Submitted 22 Jul 2019

“
This was an excellent tour and such a great way to see the city. Our guide was very knowledgeable and made the trip interesting with his historical knowledge. Highly recommended.”
MRS LYNNE D • Submitted 03 Jul 2019

“
As 'seasoned Segway travelers' we jumped right in to explore Porto. We were lucky to have Woody as our guide, and this amazing tour was personalized as it was for me and my husband only! We covered so much ground in 3 hours seeing all the city highlights, which would have taken us several days to do on foot. Woody had a great command of English, and shared a wealth of knowledge, historical, architectural, etc. with us. A PERFECT way to see hilly Porto!!”
Nancy M • Submitted 05 Jul 2018

“
First time using Segway and the experience was amazing. The stuff was not hard to learn to control and it was a perfect tool to Porto. Initially I had some issue with my booking , which was sorted out by the team. My lady guide was knowledgeable and caring therefore the tour was a wonderful experience. I will recommend the tour to others”
Yeh Y • Submitted 15 Oct 2017

“
This was our first time using Segways. They are really easy learn and fun to use. Our host Alex was awesome!! We saw all the sights in Porto.”
jigsygirl • Submitted 31 Jul 2017

“
There is no better way to see any city than on a Segway, in my opinion. Porto is a gorgeous place, but hilly. We covered the majority of the city and learned so much during our 3 hours. It's the best way to familiarize yourself with the city. Our guide was helpful and informed.”
carey c • Submitted 17 Apr 2017

“
Brilliant way to see the city. Any city! Porto is beautiful and our guide Sarah was super lovely and had great knowledge about Porto. We had amazing time!”
Inga P • Submitted 14 Nov 2016

“
Young Alex was a fantastic guide. He was an excellent teacher and should go a long way in tourism and hospitality.”
deirdregrantham • Submitted 13 Sep 2016

“
This tour was realy enjoyable which has much time to see tourist point (inside also) and enjoy driving segway. The guide Sio was very thoughtful. Always he stoped, then started some explanations. Thanks of this, we could catch the explanation of the city equally. I highly recommend.”
AYAKO M • Submitted 05 Jul 2016

“
The absolute best way to see a lot of Porto, with extremely knowledgeable staff, I had a fabulous time exploring the city this way... I highly recommend it.”
Dana G • Submitted 08 Dec 2015

“
Our guide did a wonderful job of getting us around Porto. He was not only a Segway guide, but also a History guide. My husband and I really enjoyed this activity and we could not have had a better guide.”
miatahaveit • Submitted 05 Nov 2015

“
Absolutely brilliant! As my friend and I are past the first flush of youth we were worried we would not be comfortable on segways. What a revalation, we soon felt quite as home on them and really enjoyed the tour. The guide was lovely and very knowledgable. I would reccomend it to anyone.”
M H H • Submitted 13 Nov 2015

“
Outstanding! It could not be better! The guide Sid was excellent, the equipment very good. It enriched our experience.”
JOSE F • Submitted 05 Oct 2015

“
An absolutely amazing tour, all down to the excellence of our tour guide, Sid, who we had for both of our tours with the local tour company check out their Porto Food and Wine Tasting Tour also! Sid is a true local, born and raised in Porto, so he knows the city like the back of his hand - and it shows in the way he took us around the city. Endless interesting facts about each stop we made which includes the famous Lello's bookstore and an awesome ride along the Ponte Luis bridge and brilliant views along the way, with Sid's witty humour and vast city knowledge compensating for the dodgy weather we had on the day of our tour - it got to the point where we didn't even care about the weather because the tour was so fun! I could not recommend this tour highly enough, due to the brilliant experience we had on the Segways, racing around Porto having fun whilst also learning so much about the great city itself. Sid is an absolute wonder of a tour guide, and even though this is the very first tour I've ever done, all of the tours I will have from now on will be compared to the ones he took us on, because we had such a great time :D P.S. Please read my review on the Porto Food and Wine Tasting Tour, also provided by the local tour company. Would also highly recommend to ensure you sample some of the delicious Porto cuisine and wine!”
Kalvin L • Submitted 15 Sep 2015