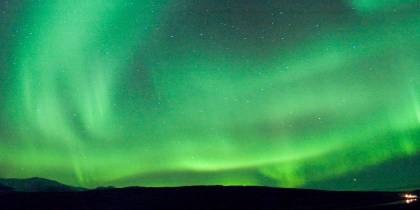 Iceland is one of the best locations in the world for seeing the Northern Lights, one of the most breathtaking natural spectacles in the world. Auroral displays appear in a striking array of colours, with pale green and pink being the most common. Read on to find out more about the best places to see the Northern Lights, as well as when and how to spot them in Iceland.

The Northern Lights are unquestionably one of the most breathtaking natural spectacles in the world. The bright dancing lights of the aurora are collisions between electrically charged particles from the sun that enter the earth's atmosphere. The lights are most frequently seen in the Polar Regions, centered within a 2500 kilometres radius of the geomagnetic poles of the northern and southern hemispheres. They are known as 'aurora borealis' in the north and 'aurora australis' in the south.

The lights of the aurora generally extend from 80 kilometres to as high as 640 kilometres above the earth's surface. The best places to see the Northern Lights is over the southern tip of Greenland and Iceland and the northern coast of Norway. In North America you can see the lights in the northwestern parts of Canada and Alaska.

Auroral displays appear in a multitude of colours although pale green and pink are the most common. All red auroras are produced by high-altitude oxygen, at heights of up to 320 kilometres above the earth’s surface. Sightings are rare, though when seen are brilliant. If nitrogen particles are added, the aurora will take on a stunning purple-red or violet hue. The lights appear in many forms from patches or scattered clouds of light to arcs, streamers, rippling curtains or shooting rays that light up the sky with an eerie glow.

Seeing the Northern Lights is a truly unforgettable experience, but one that is largely dependent on luck. As a traveller with limited time, you must do all you can to increase your chances of catching the show. The best time to view the aurora is near midnight local time, as this is when the most active displays occur and the sky is at its darkest. Aurora activity tends to come in waves during the evening, which are called aurora sub-storms.