PRIVATE TOUR: Uncover this vast, spectacular region of contrasts in comfort on a private journey that visits all the major attractions and some little-known gems. From colonial Saigon, travel north to Hanoi and Halong Bay, discover the towering golden temples and laid back lifestyle of Luang Prabang before flying onto Siem Reap - gateway to the overwhelming collection of temples at Angkor Wat.

Welcome to Saigon! You will be met at the airport and transferred to your hotel. Saigon is a bustling, dynamic and industrious urban center. It is the largest city in Vietnam, the economic capital and the cultural trendsetter whilst within the teeming metropolis are the timeless traditions and beauty of an ancient culture.
Overnight: Ho Chi Minh City

Saigon - Mekong Delta - Saigon. Explore the beautiful Mekong Delta today! Early this morning drive to Ben Tre and travel through the beautiful countryside of the Mekong Delta where we take a traditional sampan boat ride to explore the peaceful waterways. During the boat trip, visit a local cottage industries making bricks, producing rice paper and Mr. Sau Khanh’s house - who has been collecting antiques which include ancient and valuable ceramics, pottery pieces like bowls, dishes and vases, to ceiling lights, sculptures and Buddha statues.

In the afternoon we return to Saigon and tonight remains free for you to further explore the city.
Overnight: Ho Chi Minh City  |  Breakfast, Lunch

This morning discover the Saigon, taking in the Reunification Palace, Notre Dame Cathedral, and the Central Post Office. In the afternoon transfer to the airport to take a short flight to the imperial city of Hue. On arrival, you will be met at the airport and transferred to your hotel. This evening enjoy some free time.
Overnight: Hue  |  Breakfast

Today take a boat ride along the romantic Perfume River and stop off at the Thien Mu Pagoda on the banks of the river to see the 7-storey Stupa, the pagoda is also home to the old Austin car driven to Saigon by the Venerable Thich Quang Duc. A Vietnamese Mahayana Buddhist monk who in 1963 protested against the Roman Catholic persecution of Buddhists by South Vietnam's Ngo Dinh Diem Roman Catholic administration, by self-immolation.

Later we visit the Imperial Citadel and Forbidden City, created in the 19th century for the Emperors of the Nguyen Dynasty. Enjoy some free time at Dong Ba Market before transferring back to your hotel.
Overnight: Hue  |  Breakfast, Lunch

Today visit the mausoleums of Khai Dinh, then on the way to Danang, we'll stop for a refreshment at Lang Co beach en-route, one of the World’s most beautiful bays. In Danang visit the Cham Museum before continuing to the World Cultural Heritage Site of Hoi An before checking in to your hotel.

This evening enjoy some free time exploring the narrow lanes of the town, lined with century-old buildings and illuminated at night by hundreds of colourful lanterns.
Overnight: Hoi An  |  Breakfast

Today is free for you to explore Hoi An at leisure, alternatively there is an optional half-day excursion to My Son Sanctuary, a religious site dating back to the Kingdom of Champa, and also a burial place of Cham royals and Vietnamese national heroes. The My Son temple complex is one of the foremost remaining examples of Hindu influence in South East Asia and is the most prominent heritage site of this nature in Vietnam.

After lunch at a local restaurant the afternoon is free to explore Hoi An Ancient town. Why not join our optional cooking class and learn the secrets to Vietnamese cooking, alternatively head to nearby An Bang beach or observe local life on a sunset cruise on the peaceful Thu Bon River.
Overnight: Hoi An  |  Breakfast

In the morning transfer to Danang airport for the short flight to Hanoi. On arrival you will be met at the airport and transferred to your hotel.

Renowned as the ’Paris of the East’, Hanoi is one of Asia’s most fascinating cities. Rich in culture and history, this diverse city draws on its influences from both French and Chinese culture. This afternoon is at leisure, or perhaps opt for a visit to Van Giang Village to attend a cooking demonstration given by a local family. Afterwards join the Vietnamese family in their home for a delicious lunch before driving back to Hanoi to take a walk through the winding and bustling streets of the atmospheric Ancient Quarter (otherwise known as the 36 Streets) or enjoy a unique water puppet show.
Overnight: Hanoi  |  Breakfast

Depart Hanoi in the morning for the scenic drive through the countryside to Ha Long Bay, a natural wonder with thousands of islands rising out of the water creating a unique and beautiful landscape.

On arrival, board one of the traditional vessels for an overnight cruise through the 3,000 limestone islands, many punctuated by caves and grottoes. Enjoy a cooking demonstration and savor a delicious Vietnamese buffet lunch as your junk boat heads to Bai Tu Long Bay passing the towns of Hon Gai and Cam Pha, Oan Lagoon, Mat Quy (Monster Head) and Am Tich (Teapot) Islets.

Opt to take a row boat to visit the Vung Vieng fishing village or enjoy a range of fantastic recreation or relaxation activities onboard - traditional massage, swimming, kayaking and more. Finish the day off with a sumptuous set-menu dinner in perfect exotic surroundings.
Overnight: Onboard cruise boat  |  Breakfast, Lunch, Dinner

Today's cruising takes you through the Bay passing the beauty spots of Trong (Drum), Trinh Nu (Virgin) and Me Cung Caves and Coc Ngoi (Toad) Islet. Explore the Surprise Cave (Sung Sot) before a buffet brunch is served onboard.

Later we cruise leisurely back to Halong harbor where upon disembarkation transfer back to Hanoi for some free time. There is also an Optional Taste of Hanoi tour, where you will take a walking tour of the City to discover the unique flavours of the Vietnamese cuisine and encounter Hanoi’s local specialties such as Bun Cha and Cha Ca.
Overnight: Hanoi  |  Breakfast

After breakfast, transfer to the airport for the short flight to Luang Prabang, perhaps the best preserved traditional city in all of Southeast Asia. On arrival, you will be met at the airport and transferred to your hotel.

In the late afternoon we’ll go for a stroll around this quaint town and explore the lively Luang Prabang Night Market, where we can find a selection of handmade textiles on offer.
Overnight: Luang Prabang  |  Breakfast

Early this morning, an optional alsm giving excursion is available to book locally. An early wake-up call will allow you to join the locals lining up to give food to hundreds of Buddhist monks returning from theui morning prayers. After taking part in this solemn everyday ritual, stroll through Ban Pakham morning market.

Later, we head out to explore the impressive Stupa of Wat Visoun. To top it all off climb to the top of Mount Phousi for an enjoyable exploration of the sacred, gilded Stupa as well as a superb view over the town and Mekong River. Continue to Wat Zieng Thong, considered the most beautiful temple in Luang Prabang. Other highlights include the Traditional Arts and Ethnology Centre, the National Museum, the UXO Centre.

This afternoon we travel south to the famous Kuangsi Waterfall, where the turquoise water against the stunning backdrop of white limestone cliffs offers incredible photo opportunities. While there, we have the option to visit the Sun Bear Reserve, a conservation centre that rescues animals from the wildlife trade. Return to Luang Prabang, stopping at the Ock Pop Tock weaving centre en route. This evening there is an optional Baci Ceremony at a local home – the Baci Ceremony is part of traditional Lao culture and is used to bless, welcome or wish good fortune.
Overnight: Luang Prabang  |  Breakfast, Lunch

After breakfast transfer to the airport for the short flight to Siem Reap. After being met on arrival you will be transferred to your hotel for check-in. The remainder of the day is at leisure.
Overnight: Siem Reap  |  Breakfast

This morning there is an optional visit to the famous Angkor Wat, built by King Suryavarman II in the early 12th century, to watch the sun rise. Next, visit the Angkor National Musuem, decidated to the collection and preservation of Angkorian artefacts, most dating back to the 14th century. Our next stop is to the ancient city of Angkor Thom, the last capital of the Great Khmer Empire, surrounded by an 8-meter wall. As we walk through the heart of the city, we stop at the 12th century masterpiece known as Bayon Temple. Baphuon, the Royal Enclosure, the Terraces of the Elephants and the Leper King. Continue to Ta Prohm Temple, which unlike most of the other Angkor temples, has not been repaired, restored or preserved but has been left as it was found. The jungle trees and roots growing in, out and through the ruins have made this temple ruin a favourite among visitors. We then explore Angkor Wat further before returning to Siem Reap. This evening we enjoy a Phare Circus performance.
Overnight: Siem Reap  |  Breakfast

Today we set out for a cruise on the beautiful Tonle Sap Lake, passing a floating village and witnessing the daily life of the locals. This afternoon is at your leisure.

Arrangements end after breakfast and onwards departure transfer to the airport.
Breakfast

Visiting Angkor Wat
Our insiders guide to making the most of a visit to Angkor
Updated
25th July 2022
OTG000929Treasures of Indochina - 15 daysSoutheast AsiaTailor-madeSoutheast Asiafalse0Vietnamhttps://www.onthegotours.com/in/Vietnam/Treasures-of-Indochina-15-dayshttps://www.onthegotours.com/repository/Vientienne--secondary--bit-dark-153471319716675_crop_flip_300_300_f2f2f2_center-center.jpgPrivate_Tours
Pricing Information

If you prefer not to travel as part of a group to Vietnam, our private journeys allow you to get off the beaten track and travel at your own pace on a holiday tailored exclusively to the needs of yourself and your family or friends.

Our experienced English-speaking guides will be there to guide you around each of Vietnam's key sites and our local representatives will also be on hand to give any further assistance you require. 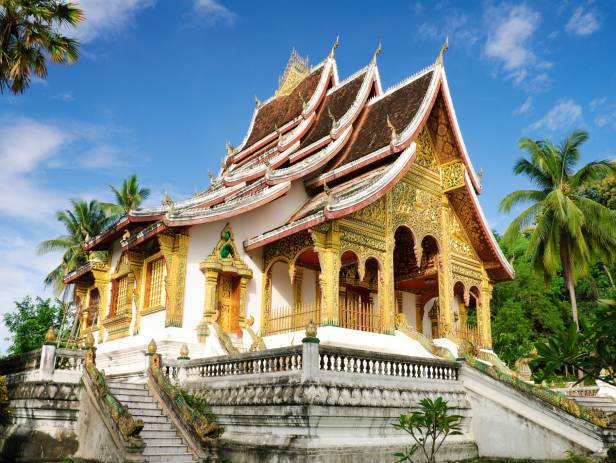