PRIVATE TOUR: Shanghai is where east really meets west. Explore the city on our 5 day Visa Free city stay with visits to the Oriental Pearl TV Tower and Anglo-inspired Bund and old city area. Take a cruise along the Huangpu River and after opt for a sunset drink at a jazz bar or some retail therapy on Nanjing Road.

Many nationalities are eligible to visit Shanghai, without requiring a tourist visa for stays up to 144 hours. For more info please scroll to the bottom of this page

Welcome to China and the start of your city break! Enjoy an arrival transfer to our hotel.
Overnight: Shanghai

Just the mere mention of ‘Shanghai’ conjures up mystery, romance and general decadence. Pre – 1949, cosmopolitan Shanghai was a magnet for seekers of wealth, idle colonialists, explorers and the dispossessed. The city’s oddities were due to the unusual circumstances of the city’s existence. Written into the Treaty of Nanjing was the notion of extra-territoriality, which translated as foreign nationals not being bound by Chinese law, but rather by the laws of their own consuls. Basically anything went. Until 1949, foreigners dominated commerce, banking and industry, amassing huge fortunes and transforming the landscape of foreign concessionary sections of Shanghai. Everything went belly up in 1949, when Mao and the communists took to power and swept the good times and rock and roll away rather swiftly. A legacy of these heady times, is Shanghai’s Bund where on and around this waterfront promenade are a vast series of grandiose pre-1949 buildings. After four decades of austerity, economic reforms implemented by Deng Xiaoping reawakened Shanghai. Just across the Huangpu River is the new Shanghai, a high-tech development of sky scrapers, the centre piece of which is the rocket-shaped Oriental Pearl TV tower. Mercedes and BMW cars cruise the neon-lit streets, modern department stores rub shoulders with cool bars and Shanghai is staking it’s claim to being China’s foremost metropolis. Our sightseeing of Shanghai takes in the awesome Oriental Pearl TV tower, the Jade Buddha Temple, charming Yuyuan Gardens and the Bund and Old City. This evening, enjoy a cruise on the Huangpu River.
Overnight: Shanghai  |  Breakfast

Two whole days to enjoy Shanghai your way. Perhaps head to Nanjing Road, just off the Bund or Huaihai Lu; the main street of the French Concession for amazing shopping, explore the Old City or drop into the historic Peace Hotel for a drink and a spot of jazz.
Overnight: Shanghai  |  Breakfast x 2

Visit Shanghai without a visa

Many nationalities are eligible to visit Shanghai, without requiring a tourist visa for stays up to 144 hours. Please see below for eligible nationalities. 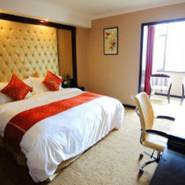 Ideally located close to several plazas and shopping centres, this modern hotel offers you a comfortable stay in one of China’s fastest growing cities. Guestrooms are equipped with all the essential amenities, with free WiFi and access to the breakfast buffet included. The onsite Dakang Restaurant also serves lunch and dinner, and you can expect a tasty menu featuring both Western and Chinese cuisine. Other amenities include a fitness centre, coffee shop and small convenience store.