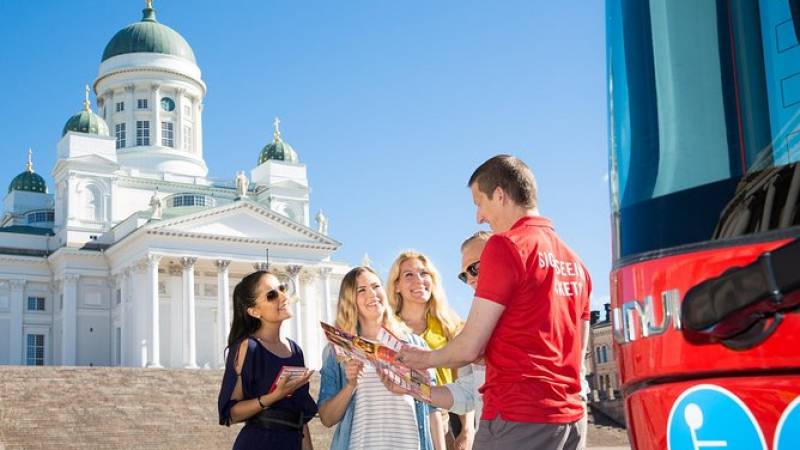 from £41.79
Explore the capital of Finland by land and water, and combine two top-selling tours on this 3-hour bus and boat combo tour in Helsinki. Explore Helsinki by sightseeing bus and enjoy the freedom to hop on and off at your leisure. With audio commentary on board, take in attractions including the Ateneum Art Museum, Market Square, the National Museum, the Olympic stadium, and Senate Square with ease. Then, take to the waves on a 1.5-hour cruise and enjoy sweeping views over the Helsinki skyline from the water.
BOOK WITH CONFIDENCE: As members of ABTA and ATAS we are 100% financially bonded. You can book your day trip with us in absolute confidence, no matter where in the world you are.

Start your adventure with a hop-on hop-off sightseeing tour by bus between 10am and 4pm, and take in top attractions including the Sibelius monument and Temppeliaukio Church. With 18 stops along the route, enjoy the freedom to explore Helsinki at your own pace. Your ticket is valid for 24 hours and entitles you to discounts on top attractions.

With commentary in 10 different languages via your audio guide throughout the tour, spin past key sites of interest such as the Ateneum Art Museum, the flea market, Kiasma contemporary art museum, Market Square, the National Museum, the Olympic stadium, and Senate Square. Along the way, gain insight into Helsinki’s history and heritage. Languages include English, Russian, German, French, Spanish, Italian, Japanese, Chinese, Swedish, and Finnish.

Hop on Hop off stops

(Stop only on cruise ship days)

Choose the cruise time to suit your schedule, then hop aboard your sightseeing boat in central Helsinki and head along the beautiful shoreline of Helsinki. With commentary from your on-board audio guide, discover famous landmarks like the Degerö Canal, Helsinki Zoo on Korkeasaari Island, and the UNESCO World Heritage–listed Suomenlinna Maritime Fortress.

During your 1.5-hour cruise, perhaps purchase snacks and drinks at the on-board cafe/ bar (own expense) and see a side of Helsinki from the water that many visitors miss. When your cruise comes to an end, step ashore to conclude your tour.

Hop-On Hop-Off Bus Tour departure point: Your route starts at Senate Square. You may board the bus and exchange your voucher at other stops as well.  Sightseeing Canal Cruise departure point: Helsinki Market Square

Scoring an average traveller rating of 4.17 out of 5 based on the last 24 recent reviews

“
Great package. The bus ride was informative and an easy way to see the city. The boat ride was relaxing yet provided insights into Finnish lifestyles.”
David • Submitted 03 Sep 2017

“
We really enjoyed this combination tour. The boat showed many summer vacation homes of the Finns. Beautiful Country!”
Elena P • Submitted 28 May 2017

“
We had an easy to find and get on and enjoy great guide on Canal tours narrated live and the hop on bus was easy to hear about each stop with great maps to follow. Wish we had more time in port but ships do not wait! lol”
David C • Submitted 27 May 2017

“
Excellent trip - recommend as we found it gave us a great starter in the town. Cruise around the islands was breathtaking”
Mr e b r B • Submitted 15 Sep 2016

“
I loved our day in Helsinki, just was unaware of the length of time for the bus and boat to get round. I will review more thoroughly another time. We never had any time to do anything besides Market square, if we wanted to get back to the ship on time. Next time I would just take the bus since the boat does not actually make any stops, tho it was a pretty ride.”
csheroki • Submitted 05 Sep 2017

“
A good tour which identified highlights. We ended up walking 80 of the tour”
Wayne S • Submitted 31 Aug 2017

“
No need to book ahead of time - there are two companies. You can see what each offer and choose there. They will not fill up.”
jenn • Submitted 24 Aug 2017

“
There was a discount on Viator when I booked but there is also a discount with Helsinki card. Both boat and bus worth doing.”
Ana-Maria S • Submitted 27 Jun 2017

“
Boat tour was nice! Bus tour was also very good once we figured out where to catch it! We loved Helsinki! Information on audio was interesting- we learned a great deal.”
Sally B • Submitted 12 Jul 2016

“
The boat part of this tour was very interesting, however we found the city overly busy and not at all interesting.”
D M P • Submitted 25 Oct 2017

“
The Bus schedule is inadequate, few buses and difficult to find bus stops. The maps are difficult to follow, the canal tour should be reduced to 1 hour, especially if you have limited time in the city.”
Mitchell S • Submitted 12 Aug 2017

“
Unfortunately it was raining heavily which made us have to sit inside on the boat , it was difficult to hear the commentary because of one very loud child. Make sure you look for City Sightseeing when you get off the ship. Their stop is outside the gate. There are 2 other hop on companies and it was vey confusing finding the right place to be. The drivers on the hop on/off bus were wonderful. Vary friendly and helpful.”
momlr4551 • Submitted 07 Jun 2017