Trips and Tours to Yekaterinburg

Russia’s fourth largest city is a complex tapestry of history and culture. Founded in the early 18th century as an industry city to exploit the iron ore of the Ural Mountains, Yekaterinburg has enjoyed many years of economic success and given birth to a thriving arts and music scene. The city has also played its part in Russian politics as the place where the country’s last Tsar family were disposed of, effectively marking the beginning of the Socialist era, and where Boris Yeltsin – the first president of the Russian Federation – attended university. With a host of historic buildings, pre-Stalinist architecture, glorious churches and interesting museums, Yekaterinburg is a fascinating city to visit and as the first major stop in Asian Russia on the eastbound Trans-Siberian railway, it receives its fair share of visitors. Sprawling across the River Iset, it’s also a surprisingly attractive city with a promenade and large square with great restaurants to boot.

Yekaterinburg is commonly referred to as City of the Romanovs, synonymous with the bloody murder of the Romanov family in July 1918. The imperial family were executed by Bolshevik troops after a year in exile in the basement of a merchant’s house, their bodies later disposed of. In 1991 archaeologists exhumed the bone fragments of nine bodies in a shallow pit near Yekaterinburg which were revealed to be the remains of the Romanovs. Tsar Nicholas II and his family were finally given a dignified burial and laid to rest in St Petersburg SS Peter and Paul Cathedral in 1998, eight years after the golden-domed, Byzantine-style Church on the Blood was erected on the site in Yekaterinburg where the Romanovs were killed.

Whether you're a history buff or a culture vulture, Yekaterinburg has much to offer and makes an excellent base for outdoor enthusiasts looking to explore the rugged Ural Mountains. 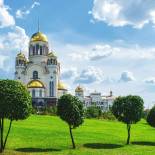 Route of the Romanovs 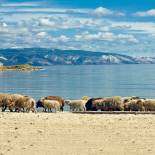 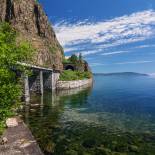 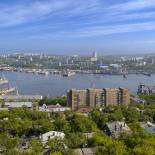 Best sites to visit in Yekaterinburg

Church on the Blood

Dominating Yekaterinburg's city centre, the massive Church on the Blood memorialises the Romanov family in a complex that also incorporates a second church, a belfry and a museum dedicated to the Tsar martyrs. Construction of the church was completed in 2003 with an altar that stands directly above the basement site where the family were executed and several icons and memorabilia from their final days. Next to the church is the more modest wooden Chapel of the Revered Martyr Princess Yelizaveta Fyodorovna built to honour Tsar Nicholas II's faithful great aunt.

Situated on Voznesenskaya hill and surrounded by attractive parkland, Yekaterinburg's oldest church is a striking example of Russian baroque architecture with a vivid blue and white exterior topped with golden cupolas. The original Orthodox church was founded in 1792 and over the years the building has been expanded and redesigned, and today contains a small museum and a number of icons. It's particularly popular during Sunday Mass and as an active place of worship has a welcoming sense of spirituality enhanced by the beauty of the adjacent park.

The heart of Yekaterinburg is the city's most happening spot come the summer when the large expanse of parkland and concrete draws local residents outside. Bordering the city pond where the River Iset flows through a small dam, Istorichesky Skver is home to the Monument to the Founders of Yekaterinburg and a water tower - the city's oldest structure with a brick base and wooden top. The riverside promenade makes for a pleasant stroll and it's here you'll also find the Architecture and Design History Museum, which houses 18th to 19th century machinery and industrial tools.

The 54th floor of the Vysotsky Viewing Platform is the best place in the city to enjoy a bird's eye view of Yekaterinburg and appreciate its orderly and rather handsome urban panorama. The Vysotsky skyscraper is Russia's tallest building outside of Moscow and the observation deck stands at a height of 186 metres affording wide-reaching views of Yekaterinburg, especially on a clear day. The tower is named after a Soviet poet and makes a play on the Russian word for 'tall'. For those thinking of making a romantic gesture the viewing platform has four private cabins for hire.

Situated in the historical centre of the city, the green and white painted house of 18th century businessman Nikolay Sevastyanov is one of Yekaterinburg's most beautiful buildings. The three-storey property was constructed during the gold rush that took place in the Ural Mountains and the merchant house certainly demonstrates the wealth Sevastyanov once enjoyed. So grand is the building that it served as the summer residence for Russian Prime Minister Dmitry Medvedev. It's not possible to enter the building but you can certainly appreciate its exterior.

A visit to the Urals Mineralogical Museum is the best way to get to grips with the mineral wealth of the region and the resulting economic success of Yekaterinburg. The private collection of crystals, minerals and semi-precious stones is housed in the Bolshoy Ural Hotel alongside displays of less polished minerals and interesting fossil prints. Many of these beautiful stones have been put to good use in figurines and caskets and for those looking to purchase high-quality stones, the attached gift shop is happy to oblige.

Recommended things to do in and around Yekaterinburg

Located around 16km northeast of Yekaterinburg, this lovely monastery marks the spot where the bodies of the Romanov family were discarded after their brutal execution. Built by the Orthodox Church in a lovely forested area, the Ganina Yama (Monastery of the Holy Martyrs) has become an important pilgrimage site in Russia with seven chapels dedicated to each member of the Romanov family alongside a particular saint. Within the grounds the mine shaft where the bodies were later found is marked with a tall cross. When visiting Ganina Yama women are expected to wear a head scarf and cover their shoulders and knees.

Since the 18th century and the work of German geographers Humboldt and Roze, the official border between the continents of Europe and Asia has been designated along a route through the Ural Mountains and numerous markers have been erected to celebrate the meeting of the two land masses. One of the more historic monuments dates back to the early 19th century and is located 40km west of Yekaterinburg. Although the obelisk seen today dates back to 1920 as a replacement after the original was destroyed, the monument is popular with visitors wanting to stand with one foot on each continent, not something you can do everyday.

Eating out in Yekaterinburg

This relaxed restaurant on one of Yekaterinburg's busiest streets is the best place in the city for authentic Georgian food. The aromas and flavours that the cuisine is famous for can all be found on the extensive menu from the mouthwatering shashlyk (Caucasian kebabs) to the tasty aubergine rolls accompanied by walnut sauce. Spread over two tiers, the dining area is decked out with weavings while traditional Georgian music plays from the speakers. There's also a good Georgian wine list.

This popular restaurant charms diners with a homely interior that could easily pass as a family living room with bird patterned wall paper, potted plants and book-lined shelves. On the menu at Pashtet you'll find well-presented Italian dishes including lasagne and bruschetta alongside Russian classics such as borscht and pork cutlets. If that wasn't enough to recommend the place then there's also Pashka, the resident cat who likes to sit among the flowerpots waiting for a bit of attention.

Stolle brings traditional Russian pies to hungry diners across Russia and further afield with a chain of restaurants in cities as varied as St Petersburg, London and New York. At the Yekaterinburg outlet you can try a range of sweet and savoury pirozhki - individual-sized baked or fried buns filled with meat, fish and vegetables or stewed fruit and cottage cheese. These pies are perfectly complemented by the tea and coffee menu, all served in a setting emulating 19th century decor.

This upmarket restaurant combines fantastic panoramic views of Yekaterinburg with classy pan-European dishes. The light and breezy interior features marble flooring with ceiling chandeliers and a grand piano used for music performances while the extensive menu features a range of salads, creative starters and meat dishes. Vertikal is located in the Vysotsky tower so a visit to the observatory platform can be combined with a meal here though book ahead as it's often busy at lunch and dinner.

Located in the western district of Sortirovska in Yekaterinburg, this complex of malls and outdoor stalls is commonly referred to as the 'Chinese Market' thanks to the predominantly Asian local population. Here you'll find hundreds of vendors selling everything from sunglasses to handbags with replicas of high-end designer brands.

Yekaterinburg is served by the international airport of Koltsovo (SVX) located 16km southwest of the city. It's the largest airport in the Urals with frequent flights to Russia's larger cities including Moscow, St Petersburg, Irkutsk and Vladivostok with scheduled international destinations including Frankfurt, Istanbul and Beijing. It's roughly a 30 minute drive from Yekaterinburg to the airport.

Yekaterinburg is a major stop on the Trans-Siberian railway and as such is well-connected to the rest of Russia. Moscow is a 26 hour journey away while the first major stop heading east is Omsk at 14 hours away. The station features a comfortable seating area as well as a bar so it's not a bad place to be waiting for a train. On train timetables Yekaterinburg is sometimes referred to as 'Sverdlovsk', the name the city once used.

Yekaterinburg experiences a continental climate marked by warm summers and bitterly cold winters, which makes the months of June, July and August the best time to visit. During the summer, temperatures range between 18°C to 35°C with a number of festivals taking place in the city. This is also the best time of year to enjoy outdoor pursuits in the Urals whether it be hiking or mountain biking. Late April and May are another good time to visit as it's drier and visitor numbers are lower with temperatures starting to get a little warmer.