Accommodation on our Trans-Siberian Railway Journeys 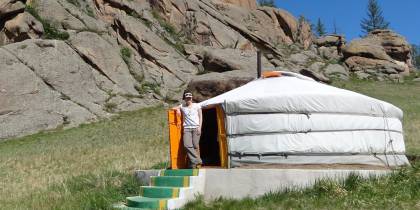 Depending on which Trans-Siberian route you are taking there will be a number of stops when you will be staying in accommodation off the train. All of our Trans-Siberian Railway Journeys include 3 star accommodation as standard. If you wish to upgrade to a higher standard of hotels, this can be arranged on request.

In Moscow you will stay at Izmailovo Gamma, a 3 star hotel which formed part of the athletes village at the 1980 Summer Olympic games. Tall and distinctively Russian, the sprawling Izmailovo hotel complex offers comfortable guest rooms with modern amenities. The complex offers 16 restaurants and bars serving Russian and international cuisine, a SPA, gym and swimming pool, in addition to shops, a bank and post office. Conveniently located with the Partizanskaya Metro Station just 350 yards away, it's a quick 10 minute metro ride to Red Square where you can take in the highlights of the capital. The hotel is also ideally located for souvenir shopping, with the famous Izmailovo Market just a short stroll away.

Please note that the Izmailovo Complex consists of two hotels - the 3 star Gamma hotel and 4 star Delta hotel. If you would like to upgrade to the 4 star Izmailovo Delta, this can be arranged upon request.

In Beijing you will stay at the contemporary 4 star Jiangxi Grand Hotel which offers comfortable and spacious rooms. The hotel is a 15 minute walk from Liujiayao Subway Station which links you to the rest of Beijing on Line 5 of the Subway. There are two restaurants located within the hotel serving local and international cuisine, as well as there being numerous restaurants in the surrounding area. Complimentary WIFI is offered in the hotel along with gym facilities.

On Trans-Siberian Railway journeys that include a stopover in Ulaan Baatar there is the option to camp out in a ger for two nights in Terelj National Park.

Mongolia is the home of the 'ger' or 'yurta' as it is known in Russia. More than 70% of Mongolia's population, many of whom are nomadic, live in gers, and have done since the time of Marco Polo. The Mongolian ger is built to withstand some of the harshest climate extremes, from the freezing gale force winds that blow from Siberia and winter temperatures which regularly fall to minus 40 degrees to the summer heat of the Gobi desert.

Easily assembled and disassembled, its components can be loaded on a couple of camels or horses. It is made of a wooden framework covered by large pieces of felt. A decorative cloth covering may be laid over the felt. The ropes which go around the ger, called bus (belts), are usually made of braided horse mane and tail hair. The wooden framework consists of collapsible walls, topped by poles radiating from a central smokehole ring.

Inside, gers are deceivingly spacious. Entering from the southern side, in the centre is a stove, with a pipe emerging from the roof. This provides the ger's occupants with warmth and hot food. The internal layout always follows the same traditional pattern, in that to the west is the men's side and to the east, the women's side. On the men's side, saddles, weaponry and the airag (mare's milk) bag is kept. Cooking implements are generally stored on the women's side. The most revered part of the ger is the northern part, where today families keep heirlooms and keepsakes.

NOTE: During the winter months (usually October to April, although dependant upon the weather), due to the harsh weather conditions, clients can decide upon arrival, whether to stay in permanent accommodation in Terelj National Park or a Mongolian ger.

To help plan your adventure on the Trans-Siberian Railway, check out these handy travel guide resources:

Best Time to Visit - climate and seasons in Russia, Mongolia and China
Best Places to Visit - our top 10 stops along the journey
Tourist Visas - all you need to know before you go
Top Travel Tips - time zones, currency, health advice and more
Planning your Journey - essential information to help you plan your route
Getting Tickets - for travelling with children, as a group and more useful info
Style of Travel -what to expect on our Trans-Siberian Railway Packages
Traveller Reviews - here's what our past travellers had to say about their experiences