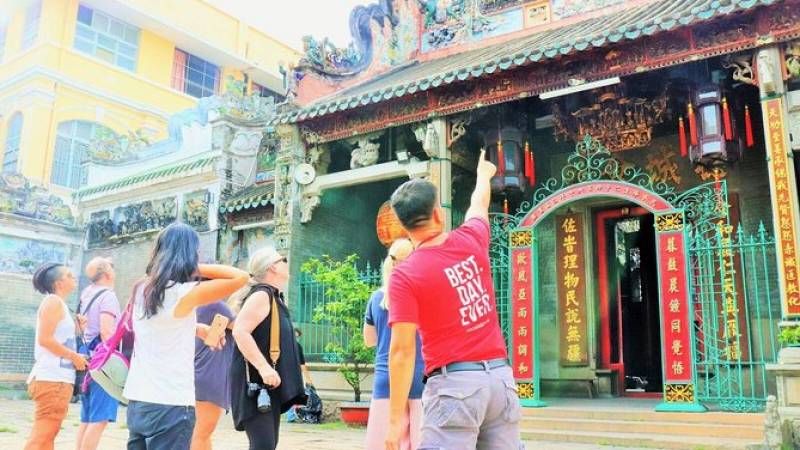 from £38.37
Experience the best travel stories for yourself! Join a local expert and uncover hidden gems on this Lonely Planet Experience powered by Urban Adventures.
Explore bustling Ho Chi Minh City (formerly known as Saigon) on this small group adventure tour.The Ho Chi Minh City tour will give you an insight into the history, culture and the daily life of the locals in Ho Chi Minh City. Bargain for souvenirs at Ben Thanh market and enjoy a lunch of local Vietnamese cuisine. Learn about Vietnam's modern history by visiting the Reunification Palace and War Remnants Museum and finish the day with a stroll along Ho Chi Minh City's tree-lined boulevards.
BOOK WITH CONFIDENCE: As members of ABTA and ATAS we are 100% financially bonded. You can book your day trip with us in absolute confidence, no matter where in the world you are.

We will meet our guide there. We'll start checking out all the major Ho Chi Minh sights like the Opera House, the General Post Office, an icon of Saigon, and Notre Dame Cathedral, built by the French during the colonial era. Both structures are fine examples of architecture from the colonial period.

Our HCMC tour takes us to the Reunification Palace, previously referred to as the Presidential Palace, and the site of the official South Vietnamese surrender on April 30th, 1975.

The War Remnants Museum was originally opened in September 1975, it displays old military equipment and other related items from the Vietnam War.  In the courtyard we will find some larger exhibits including a F5A fighter and a UH1-Huey helicopter.

We'll enjoy a traditional local Vietnamese lunch of pho, or noodle soup – a must when you're in Vietnam!

We head to Chinatown and passing through the fascinating back streets near Cho Lon. This area is one of the most busy commercial districts of Ho Chi Minh City and its atmospheric streets are home to some of the city's most interesting sites.

From there, we'll pay a visit to Thien Hau Temple, which was built in the early 19th century and dedicated to the goddess of seafarers. And you'll also get to see downtown Saigon, and get a real feel for local life in the past and present.

You will be dropped off at your hotel.

“
Thanh was a delightful guide who had a wealth of facts and figures. We got to see a couple of things we would not have found ourselves. Only 5 of us in the group. A great first day in HCM as it reaĺly gave me my bearings.”
Angela S • Submitted 09 Jul 2018

“
This is a fantastic tour - Linda was amazing - her knowledge was incredible we enjoyed it so much. We only had three people on the tour and it was fabulous - we enjoyed hearing about the history of the Vietnam war as well as seeing so many sights of the city and enjoying lunch at a local restaurant. Thankyou for a most enjoyable day - would highly recommend to anyone wanting to see a snapshot of the city in a day.”
carmelt1505 • Submitted 04 Apr 2018

“
We learnt a lot about Ho Chi Min city and Vietnam from this tour. The Guide was informative and very helpful. Great if you have limited time in the city because you see a lot in the day, and in air-conditioned comfort.”
Jane D • Submitted 03 Apr 2018

“
Best tour ever ! The guide was wonderful - I'm so sorry I can't remember his name - but he was helpful and fun and made the whole day terrific !!”
Susan K • Submitted 07 Feb 2018

“
Tour guide was doing only her 2nd tour, but she did it well. Was able to get us in a lot of places that a larger group could not go, e.g. the Chinese market. Spoke good English. Very friendly young lady.”
Joe • Submitted 26 Jan 2018

“
An absolutely outstanding tour. Quality and first class all the way. The tour guide Van and the driver picked me up at my hotel in a brand new Toyota Fortuna that was spotless. It was myself and one other guest, The tour states it will be 12 guests or less on the tour but since it was jut two of us I felt we got a more personalized tour. Our guide Van was absolutely delightful and very knowledgeable and accommodating. I highly reccomdend this tour over all others. I promise you wont be disappointed. The tour was all inclusive with all the tour sites as well as lunch included.”
Mark W • Submitted 23 Jan 2018

“
We saw all the main sites with a good English speaking guide - Cholon or the Saigon Chinatown in the morning, then a brief lunch at Pho 2000 overrated, but apparently Bill Clinton ate there - now it looks more like a fast food joint in terms of ambience. We also stopped at the Tien Hau temple in Cholon, had visits to local markets - Binh Tay in Cholon and then Ben Thanh in Saigon, and visited the small church where former president Ngo Dinh Diem took refuge in final hours of his life before his assassination in 1963. Also included were a visit to the War Remnants Museum which has a good history of the Vietnam War told through journalists' photographs - and in that sense, at least it was not blatant propaganda - and a tour of the old presidential palace / unification palace. Then a short walk to the cathedral, opera house and main post office - the major French era colonial buildings. Small tour group of 4. Timely pick-up with tour ending at about 4pm.”
Richard C • Submitted 04 Jan 2018

“
Great way to see the main sights of the city. Guide was absolutely amazing, think her name was Queenie? but was so helpful and friendly it really made the tour very enjoyable.”
Kim K • Submitted 16 Nov 2017

“
The best way to see the highlights of Saigon in one day.It was nice to have a small group so you have the opportunity to ask questions while also discussing and sharing thoughts with the group. Our tour guide Nhi was excellent, information and helpful. Highly recommend.”
Shane F • Submitted 31 Oct 2017

“
Our plan was to do this trip on out first morning in Ho Chi Minh so that we had a thorough orientation of the city and could pick up ides from fellow travellers of what we should see, and any tourist traps to avoid. This tour exceeded our expectations in this regard. Our guide TAN was a natural entertainer in addition to being knowledgeable and informative, he worked at a relaxed pace ensuring that we did not feel rushed at any of the many sights we visited. We learned so much about the history of Saigon, and the visit to the War Remnants Museum was extremely moving. Lunch was also a highlight, learning to eat the Pho Soup the Vietnamese way at a local haunt which features photographs of Bill Clinton when he came for a feed. We also visited coffee shops, a Chinese temple and the markets. Overall, an amazing introduction to an amazing , vibrant city.”
Daniel N • Submitted 25 Oct 2017

“
Our guide, Queenie, was very helpful and organized, including our driver, Mr. Phom. I turned out to be the only one who was scheduled for that day's tour, so we had flexible time in visiting all the places indicated in the itinerary. Would be grateful, though, if bottled water was made available during the tour, given the hot, humid weather in Ho Chi Minh. But all in all, I am very satisfied with this tour.”
ckalingo • Submitted 18 Oct 2017

“
Great job by tour guide Mary and driver Hung. Our group of 4 was picked up from 2 separate hotels, and over the next 7 hours visited the War Remnants Museum, Reunification Palace, Post Office, Chinese pagoda, Chinatown market, and a very cool/different Herbal Medicine Museum. Lunch was included at Pho 2000, right next to the market. Top marks for all areas, and we had a great day.”
Roger A • Submitted 20 Sep 2017

“
A great way to get to know the City! Our guide Tan was amazing and knew his stuff. The sites we visited were great and there was plenty of time to explore each venue. Worth every cent!”
Matt W • Submitted 04 Jul 2017

“
Best tour guide ever! Excellent English. Very knowledgeable on all aspects of Vietnamese history. A pleasure to spend the day with Nhi. Gave me great tips for eating out and other places to see. Thanks Nhi. I will always remember that day!”
Katherine W • Submitted 22 Jun 2017

“
I was very lucky. There was only me in this tour group! So I had my tour guide all by myself. Ruby was such a lovely girl and we chat all the way through the whole tour. I enjoyed the attractions as well as the information /knowledge I got from her,oh, couldn't forget the Vietnamese coffee we had in the park too. Everything was well organized with comfortable transportation,nice meal and good people. I had a great time on this tour! Thanks.”
lisaljn • Submitted 21 May 2017

“
This tour is amazing, if you want to maximise your time in this wonderful city do this tour you will not be disappointed. All of the places visited were very interesting, lunch was good, our guide fantastic. Thank you again Viator, very happy - now done 20 tours with your expert help!”
Sandra S • Submitted 18 Apr 2017

“
The tours I booked with Viator were all amazing! The guides we had were special! They were pleasant, informative, interesting, knowledgeable, easy to talk with and attentive to our needs. I have never been so entertained as I was by our guide Linda, on this tour and the same goes for our 3 Day tour to DaLat and our 1 Day tour of Hue but with different guides. We saw everything I considered of interest and then some, in Ho Chi Minh City. The Reunification Palace, War Remnants Museum, Ben Thanh Market, Chinatown and Market, A Pagoda, the Notre Dame Cathedral, Post Office, City Hall and a fantastic Pho Restaurant where we ate superb Chicken Pho. She was very patient with us and attentive to my age. I'm 72 years old and I truly appreciated her patience! I especially loved the Pagoda where we were shown how to light incense trees and dedicate our prayers to our ancestors or someone we loved. The trees would burn for one 1 week. Make sure you wear very comfortable shoes because there is lots and lots of walking and some climbing stairs.”
Carolyn D • Submitted 01 Apr 2017