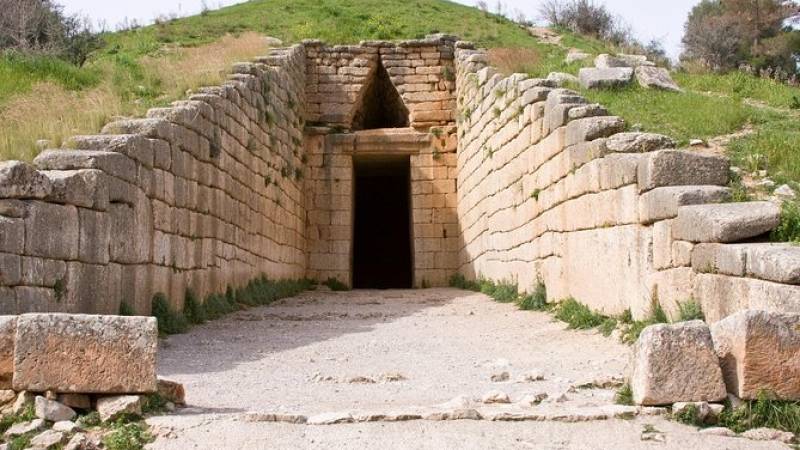 from USD $122.54
Explore with this guided one full day trip from Athens to Nafplio area the remains of the ancient city of Mycenae, the unique Epidaurus theater and enjoy Nafplio, one of the most beautiful cities of Greece.
BOOK WITH CONFIDENCE: As members of ABTA and ATAS we are 100% financially bonded. You can book your day trip with us in absolute confidence, no matter where in the world you are.

Depart from our terminal for one day tour via the coastal National highway for the Corinth canal (short stop).

After the Corinth Canal, you enter the region of Argolis, land of Homer’s Golden Mycenae, a UNESCO World Heritage site. Dating back to the second century B.C., Mycenae was one of the major centers of Greek civilization and a military stronghold which dominated much of southern Greece . Visit the archaeological site, home to the kingdom of mythical Agamemnon. You will see the Cyclopean Walls, the Lion’s Gate, the Royal Tombs, including Agamemnon Clytemnestra's, and the Treasury of Atreus, a magnificent 14th-century B.C. structure. In Mycenae you will have the chance for an optional stop in a pottery factory.

Then, proceed to Nauplion the first capital of modern Greece with its Venetian fortress of PALAMIDI and the fortified islet of BOURTZI. It was named after Nafplios, son of Poseidon, and it is home of Palamidis, the local hero of the Trojan war and supposedly the inventor of weights and measures, lighthouses, the first Greek alphabet and the father of the Sophists. After a walking tour of the city, you will have lunch in a restaurant beside the sea with amazing views of Bourtzi islet in the middle of the Port. Those who have selected the option without lunch, will have the time to explore further the city or relax having a nice coffee.

Continue on to Epidaurus and visit the ancient theatre. The UNESCO’S world heritage listed monument is reputed to be the birthplace of Apollo's son Asklepios, the healer and was the most celebrated healing center of the classical world. Epidaurus is probably most famous for its theatre, one of the best preserved classical Greek buildings and still used today due to its amazing acoustics. The Argolis (Mycenae - Epidaurus) day tour returns to Athens in the late afternoon.

Scoring an average traveller rating of 4.19 out of 5 based on the last 16 recent reviews

“
Evan our guide was fantastic. After a rather mixed up start with people being late to the tour, we got underway. The Corinth Canal was our first stop and a good photo opportunity. We then went to Epidaurus and saw a well preserved Theatre and other sites. Lunch was then at Nafplio. Nafplio was a beautiful town and it would have been good to have has a bit of extra time there. Finally we went to Mycenae which was fantastic. Our guide made the tour better with his knowledge and mythical Greek stories. It’s a long day but well worth it.”
Helmut B • Submitted 03 Jul 2019

“
Fantastic time, and great guide. The pick up at the hotels was a little chaotic, but it worked out.”
Robert I • Submitted 27 Aug 2017

“
Excellent tour even though wet and windy. Apart from the amazing locations what made it so great was the excellent tour leader- so knowledgable they made the place come to life.”
Barbara K • Submitted 10 Aug 2017

“
We were very happy with this tour. It was good to get outside of Athens and see some different parts of Greece. I wish we had a short time to walk around Nafplio. It was either eat with the group or have free time. This should have been explained in the itinerary. Nafplio was a beautiful little port. The ruins of Mycenae were impressive and made sense since the next day we went to the National Archeological Museum and saw all the artifacts from Mycenae on display. The ampitheater of Epidaurus was impressive too.”
Kenneth W • Submitted 04 Jul 2017

“
This trip certainly met and exceeded my expectation for Greece!”
Sam S • Submitted 01 May 2017

“
We had a great time. Our guide was very knowledgeble and the sites were very interesting to see. The restaurant we ate at in Nafplio was delicious and the pickup and drop off points were right around the corner from our hostel. Highly recommend this tour!”
lindsayhartmann12 • Submitted 14 Jun 2016

“
Really great tour, great way to see the Peloponese and the Greek countryside. Really felt like you got to see a lot of cool sites, and not sit on a bus all day. Stops were well planned and you never felt overly rushed. Lunch in Nafplio was great, really scenic little town. Tour guide Rouli was amazing and was super knowledgeable about Greek history, while also being able to inject some humour into history. Would definitely do this tour again if I ever returned to Greece.”
laurentrueman • Submitted 09 May 2016

“
This tour was really amazing, our tour guide was lovely so sorry I forgot her name but she was so knowledgable and friendly, my husband and I were really happy. The bus was clean and we had a small group so that was good. My only dissatisfaction was the lunch provided, it was not a typical greek menu as I thought and I was so excited to eat in Nafplio. The scenery was amazing the beautiful see and the pier etc but the food was a total let down. We were told it was a 4 course meal, the salad was only lettuce and dressing no feta, olives etc, that was not really a salad and the main course was disappointing of tomato chicken and fries thats it, don't even let me say desire which was watermelon! That was my only problem everything else was perfect!”
Zananai D • Submitted 04 Jul 2017

“
Tour group should change the order of events. Go to Mycenae first bc it is an uphill walk in the heat! Save epudarius for the end. Also need more time in Nafplio.”
Sarah C • Submitted 26 Jun 2017

“
Had a really good day on this tour - BUT The restaurant we went to for lunch was very ordinary as was the food. I didn't choose the lunch option when booking this tour as I expected we would be in a town where we could just get something as we walked around. We were driven to a restaurant which was nowhere near a town so we had no other food options. VERY DISAPPOINTED! After lunch we went to the beautiful little seaside town of Nafplio FOR ONLY 5 MINUTES! The tour operators should drop the restaurant visit and go straight to Nafplio as there were heaps of cafes there.”
Bernadette B • Submitted 21 Jun 2017

“
Return late afternoon is the starting time to return to Athens. Very long day. Picked up at hotel at 8am and dropped off at hotel at 7:50pm. Mycenae site is amazing and worth seeing. . We had no walking tour of Nafpilo. Too much time for pottery shopping”
Paula E • Submitted 12 Sep 2016

“
while the driver and especially the tour guide were fantastic, because of a traffic tie up ,we had very little time at the sites we wanted to see.There was no actual walking tour of Nafplio at all. There was a side trip to a local studio supposedly to see them make pottery and statues, but we saw nothing of that, it was to sell us things they make.”
David D • Submitted 10 Mar 2016

“
Tour guide was not very helpful and a bit difficult to understand. We were unsure about meeting place and we're subsequently late back to bus. Misunderstood what she really meant by museum. We went to actual museum at Mycenae when she meant that we were going onto to the Beehive burial site which was also a museum.”
mcwallace • Submitted 06 Jul 2016