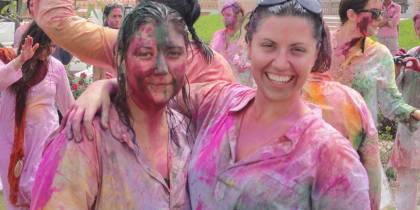 All your frequently asked questions are answered from the origins of the Holi festival of color to how it's celebrated and where best to join in the experience in India.

Every year the streets of India become a riot of color and frivolity as people across the country celebrate Holi. Dating back throughout the centuries, it's a festival that is highly significant to the Hindu religion and has, in recent years, been adopted by countries across the globe as a fun event that brings people together by celebrating unity and harmony. Whether you're planning to visit India and experience Holi firsthand or are simply interested in learning more about the festival, here you'll find a wealth of information to help you better understand this significant celebration.

It is not known exactly when Holi originated but there is mention of the celebration as early as the 4th century in ancient Sanskrit texts and poems. It has always been known as a festival of color with the word 'Holi' deriving from the name of the Hindu demoness 'Holika'.

It is thought that Lord Vishnu then appeared and killed Hiranyakashyap in an act of good over evil. The next day people gathered around the debris of the fire and smeared their faces with ash. Over time this morphed into the use of colored powder.

Krishna is also associated with Holi due to his blue skin, which was a result of the she-demon Putana poisoning him with her breast milk. Young Krishna was worried that girls would not like the color of his skin and so his mother encouraged him to playfully color the face of Radha so that they would be equal. Their relationship is honored in the act of applying colored powder to friends, family and even strangers.

Holi festival begins with large bonfires where people gather to watch the burning of Holika effigies. Religious rituals and prayers are carried out in the hope that evil will be destroyed in the fire like Holika was. The following day is when the real fun starts as people hit the streets to throw colored powder at anyone they can. Participants use water guns, water-filled balloons and even sprinklers to make the powder travel further and create a truly hilarious environment. These celebrations take place across cities, towns and villages, in urban parks, pedestrian streets and local temples. Small parades of musicians provide the soundtrack with drummers and singers moving from one place to another.

As the birthplace and childhood home of Krishna, the neighboring temple towns of Mathura and Vrindavan focus on the traditional rituals of the Holi festival. Celebrations begin a good week in advance with the throwing of flowers, known as Phoolon Wali Holi, followed by a colorful procession in Mathura. On the day of Holi, colors are thrown according to tradition and one of the best spots to watch the spectacle is the Dwarkadheesh Temple.

As the historic capital of the Rajput kingdom, the alluring city of Udaipur is home to a rich heritage and gorgeous imperial architecture. It's also home to the custodians of the Mewar Dynasty; and over Holi, the royal family host public celebrations with an extravagant procession through the city streets and a large function held at the City Palace. It's a chance to witness royal musicians and dancers perform before the traditional sacred fire. The following day the streets of Udaipur explode with activity, color and happiness.

The capital city sure knows how to put on a show when Holi arrives with lively events held across Delhi. One of the biggest events is the popular Holi Moo Festival with multiple stages hosting DJs and international music performers. What was once an underground collaborative between creatives is now a large-scale carnival that draws the crowds for a revelry of music and color with food stalls filling the hunger gap.

The home of Bollywood and one of India's biggest cities, Mumbai is another place that puts on a show over Holi with rowdy parties and street celebrations. But if you're looking for a more philanthropic way to enjoy Holi then consider joining a guided visit to the Dharavi slums where you can learn all about life in this huge shanty town and celebrate this colorful festival with the residents. The best part about it is that 80% of proceeds go back into the community.

The ancient Hindu capital of Hampi is one of the few places in southern India where Holi is celebrated with the same level of vigour as the north of the country. As a popular tourist destination, the stalls of Hampi's main bazaar sell mound upon mound of multi-colored powder when Holi arrives, ready for the main event as locals and travelers head out to play among the crumbling ruins of the once mighty Vijayanagar empire.

As one of India's holiest cities, Varanasi offers a highly spiritual environment in which to honor the religious significance of Holi. The ghats become a paintbox of color when the playful throwing starts and lead, like a rainbow, to the revered River Ganges. The frivolity is confined to the morning before people then head to their homes while the riverside returns to its solemn duties as the daily cremations are carried out.

During the festival some men may consume bhang, an intoxicating drink that is prepared with an edible form of cannabis. Whether inebriated or not, some do behave inappropriately and use Holi as an opportunity to grope women in the crowds. If you are a solo female traveler, it's best to join a group of travelers for safety and avoid the peak time of celebrations when things can get out of hand.

Much of the colored powder used nowadays is colored with toxic chemicals and dyes which can aggravate your skin and eyes, especially if you have sensitive skin. Unfortunately there's no way of ensuring that others use naturally dyed powders so follow the advice given in our 'Essential Tips' to protect yourself as much as possible from potentially irritating substances.

Many travelers enjoy Holi festival out on the streets of India without any troubles at all bear in mind that it's a boisterous and busy event that can be relentless at times.

If you want to visit India for Holi with other like-minded travelers, check out our dedicated Holi Festival group tour. Visiting the Golden Triangle of Delhi, Jaipur and the Taj Mahal, we celebrate Holi in the attractive walled town of Bharatpur.

A special Holi party is held on the lawns of our hotel, the Udai Vilas Palace, where guests are invited to get messy with organic colors. This is a great way to enjoy the essence of Holi without having to tackle the large and raucous crowds out on the streets.

Best Time to Visit - climate and seasons in India
Best Places to Visit - see our recommended top spots in India
Tourist Visas - the lowdown on visa regulations for India
Top Travel Tips - information on money, health and food in India plus more
Where to Go When - the best destinations in India by month
Traveler Reviews - see what our passengers say about our India tours
Travel Operators for Tigers - learn more about the work we do for tigers in India
The Golden Triangle - visiting Delhi, Agra and Jaipur
Visiting Rajasthan - our guide to India's largest state
Visiting Kerala - everything you need to know about Kerala
Tiger Safaris - where to see a tiger in the wild
Diwali Festival FAQ - all your frequently asked questions answered
India Video Lounge - incredible India beautifully captured on film