Explore the highlights of northern Morocco departing from vibrant Marrakech. Take in the Atlantic coast, the famous Hassan II Mosque in Casablanca and discover ancient Roman ruins in Volubilis. Continue to Fes to immerse yourself in the hustle and bustle of the city’s souks and tanneries before travelling to Tangier, the gateway between Europe and Africa.

Marrakech - Begin your adventure in Morocco's most famous city, perhaps opt to add a few days pre-tour accommodation to explore
Fes - Discover the oldest medieval city in the world with guided sightseeing, including its famous dye pits and tanneries
Volubilis - Enjoy a guided tour of this ancient Roman city, home to some of the best-preserved ruins in Morocco
Chefchaouen - Spend two nights in this Blue City in the Rif Mountains, exploring the central Plaza Ura el-Hammam and kasbah at leisure
Casablanca - Explore this famous coastal city independently and opt to join a visit to the iconic Hassan II Mosque
Meknes - Tour this imperial city, known as the 'Versailles of Morocco', and visit the Mausoleum of Moulay Ismail and Grande Mosque
Moulay Idriss - Visit Morocco's holiest city, which only opened to non-muslims in 2005 and is characterized by pretty whitewashed buildings
Tangier - End your trip in the 'Gateway to Africa' with time to explore the port before you depart for home

International flights and visa
Tipping Kitty: USD$45pp, paid in USD or local currency 
Tip for your tour leader. We recommend you allow USD$2-3 per day, per traveller. Tipping your guide is an entirely personal gesture

Saturday. Welcome to Morocco! On arrival to Marrakech airport you'll be met and transferred to your hotel. The rest of the day is at leisure to relax at the hotel pool or explore the city. This evening, meet your guide and fellow travelers for a welcome meeting and dinner at 18:00.
Overnight: Marrakech  |  Dinner

Marrakech - Casablanca. This morning we journey to Casablanca, famous for the Humphrey Bogart film of the same name. On arrival we have some free time to wander through the old Medina, or perhaps travel beyond the Medina to the quaint new town and stroll down the palm-lined boulevards witnessing the small markets selling food and handicrafts. For those looking to delve into the city's culture, there is the option of visiting the world-renowned Hassan ll mosque, the third largest mosque in the world.
Overnight: Casablanca  |  Breakfast, Dinner

Casablanca - Fes. Departing early, we continue our journey to Fes, the largest and oldest medieval city in the world. En route, we stop at the imperial city of Meknes where we stop for a visit to the 12th Century Grande Mosque and Mausoleum of Moulay Ismail, the final resting place of sultan Moulay Ismail.

This afternoon, we move on to the Roman settlement of Volubilis, the largest ancient site of Morocco, for a guided tour. This well preserved UNESCO-listed site dates back to AD40 and once ruled the entire Roman province of Mauritania. Onwards to picturesque Moulay Idriss - Morocco's holiest city. This white washed town was opened to non-muslims in 2005, and we have some time to wander around before continuing to Fes, our home for the next two nights.
Overnight: Fes  |  Breakfast

Fes, the oldest and largest of Morocco's imperial cities, is ours to explore today. Home to 400,000 inhabitants, with only bikes and donkeys as a means of transportation, the city is an intoxicating mix of aromas, sights and sounds. We'll learn the fascinating history as we explore the tanneries, dye-pits, souks, potteries and famous Medina - said to be the best preserved Medina in the Arab world. We’ll later return to the hotel to get ready for an optional night of Moroccan entertainment and food at a restaurant in town.
Overnight: Fes  |  Breakfast

Fes - Ouazzane - Chefchaouen. After breakfast we depart Fes and continue our journey off-the-beaten track to the small town of Ouazzane, situated on the edge of the Rif mountains. This spiritual capital and famous pilgrimage site attracts Moroccan Jews who come to pay respects to the tombs of several Moroccan saints.

We'll then head high up in the Rif Mountains to Chefchaouen, a former berber post which boasts a beautiful blue door and white-walled medina. The main square is the heart of Chefchaouen, with the Kasbah (built back in the 18th century), central mosque and cafes with authentic menus. Enjoy some free time to explore busy market which is a mix of traditional Moroccan and tourist fare.
Overnight: Chefchaouen  |  Breakfast

Today is ours to explore Chefchaouen at leisure. Spend your time uncovering the city's delights - The Plaza Ura el-Hammam is the perfect spot to sip on mint tea and watch the world go by, or perhaps enjoy a spot of lunch in one of the restaurants of cafes scattered in the Medina. For the more adventurous, leave the city and discover the incredible landscapes of the Rif Mountains on one of the wonderful day hikes.
Overnight: Chefchaouen  |  Breakfast

We enjoy one final breakfast together before leaving the 'Blue City' behind and making our way to our final port of call - Tangier. Located on the Maghred Coast, where the Mediterranean Sea meets the Atlantic Ocean, is the gateway between Africa and Europe. We have time to explore the beautiful port, where we have the opportunity to visit the Dar el Makhzen, a former sultans palace that is now a museum of Moroccan artifacts, the old and new Medina's or just relax and enjoy some people watching. Our tour concludes after lunch at approximately 1pm.
Breakfast

START YOUR TOUR IN CASABLANCA

We do offer the option to start this trip in Casablanca. Please ask us for more information!

Departures are guaranteed to operate with a minimum of 4 persons. 'Twin Share' prices are per person when there are 2 people sharing a room. 'Single Room' prices are applicable to solo travellers wanting the privacy of a single room. 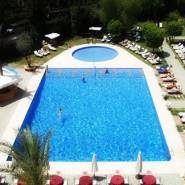 Just 10 minutes from the airport, the El Andalous Hotel and Spa offers a welcome respite from the hubub of the city. Evoking the golden age of Arab-Andalusian culture; exotic and romantically rich. Guest rooms are well furnished with excellent en suite facilites as well as private balconies. The hotel pool is great place to relax by and enjoy a tasty beverage or two. The medina is just a 20 minute walk from here or a cab can get you there in a few minutes! 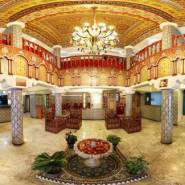 In the centre of Casablanca, Moroccan house is a charming hotel. Designed similar to a traditional Riad, this quirky residence offers delicious Moroccan food as well as getting the chance to prepare it yourself. Guest rooms include comfortable beds, complete with frilly lace canopies and all the modern conveniences you could ask for. Located a few steps away from the port and a short drive to the Hassan II mosque. 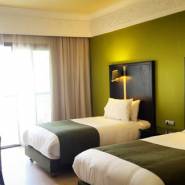 Located close to the city centre, Hotel Diwan is a contemporary hotel just a short walk from the main train station. The modern guest rooms are air conditioned with flat screen TVs and en suite facilities. The onsite restaurant offers a buffet breakfast every morning as well as an array of international cuisine in the evenings for dinner. The hotel also has an on site gym, spa and complimentary wi-fi is available. 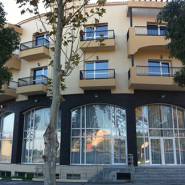 Boasting a garden, outdoor pool and mountain views, Hotel Arena offers a great location for visiting the Royal Palace and the bustling medina of Fes. Each of the rooms is fitted with a balcony allowing for city or pool views, alongside modern amenities such as air conditioning and WiFi. Guests can enjoy a continental breakfast in the onsite restaurant and take advantage of the hotel’s spa facilities. Alongside a sauna and massage treatments, guests can unwind with a traditional hammam steam bath complete with a facial scrub and body masks. 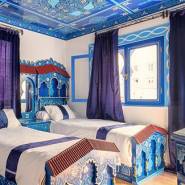 Hotel Madrid offers a fantastic location in the centre of Chefchaouen, just 300 metres from the blue streets of the old town and a short stroll from the bustling Place Outa el Hammam and Kasbah. Its standout feature is its traditional décor, with the hotel’s Moroccan lounges and guestrooms all painted in bright colours and patterns, giving the property a very authentic feel. Some of the rooms also feature four-poster beds and the patio is a great spot to unwind after a day of sightseeing.

Departures are guaranteed to operate with a minimum of 4 persons. 'Twin Share' prices are per person when there are 2 people sharing a room. 'Single Room' prices are applicable to solo travellers wanting the privacy of a single room.

ROOM SHARE OPTION: If you are a solo traveller and happy to share of room then you can pay the ‘Twin Share’ price and we will pair you up with another solo traveller of the same gender.

Please do not book flights until we have confirmed your chosen date is guaranteed to operate.

Tipping is not a natural part of many Western cultures and many of us feel uncomfortable, or unsure, about when, or how much, to tip. However, in Morocco, tipping makes up a significant part of many people's wages so it's important that we get it right. For this reason we've developed a very simple system to take all the hassle out of tipping. With our 'tipping made easy' policy, a nominal pre-determined amount is collected from all group tour participants to cover tips en route. This then saves you the hassle of when and how much to tip bellhops, luggage handlers, local guides and other support staff through the tour. Our 'tipping made easy' doesn't include a tip to your group tour leader. Naturally, though, the amount is up to you as tipping is an entirely personal gesture.

All of our Morocco tours are led by knowledgeable and experienced Moroccan tour leaders. We include an arrival transfer and all the top spots with guided sightseeing and specialist local guides along the way.

A number of tasty meals are also included each day. We've also recently launched a 9 day tour that starts and ends in Casablanca, opening up better flight possibilities for those travelling from Canada, South Africa and Australia. Check out our Road to Casablanca itinerary for more information.

A night in the Sahara: We spend a memorable night camping out at a remote Berber camp, surrounded by the vast Erg Chebbi dunes, on the edge of the Sahara Desert. Our desert camp consists of six traditional Berber tents with mattresses for sleeping on and a toilet tent. You can opt to sleep inside a tent or outside under a spectacular blanket of stars.