Trips and Tours to Khwai River

The Khwai River is situated on the Northern side of Botswana and extends from the dazzling Okavango Delta, one of the country's top destinations, and forms part of the Moremi Game Reserve border. This powerful body of water is located near a village aptly named the Khwai Village, which started as a small San settlement and has grown much larger in the past years. It is also one of the first places where non-hunting Botswana safaris originated. This river can be seen near the North Gate of the Moremi Game Reserve.

Lately, the Khwai River has gained a worldwide reputation as being one of the best game areas in all of Botswana offering some utterly spectacular wildlife viewing opportunities. Surrounding the Khwai River, wildlife and birdlife are in abundance. This area is a regular host to a wide variety of animals which include: elephants, buffalo, lions, leopards, servals, cheetahs and the wild dog. The wild dog has been the subject of a conservation project being run in the area since 1989. The waters of the river are also frequented by hippos – often seen during the day and heard at night.

A combination of lagoons and channels of papyrus, the Khwai River is surrounded by little islands that feed off the borders of the river. It is fed by Angola’s summer rains, which take approximately four months to flow down into Botswana. This is due to the fact that the Botswana terrain is very flat and dry. The water reaches the Botswana area in the middle of the dry season. A number of different operators in the area take visitors on game viewing tours and will show you the best that this incredible region has to offer. 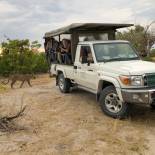