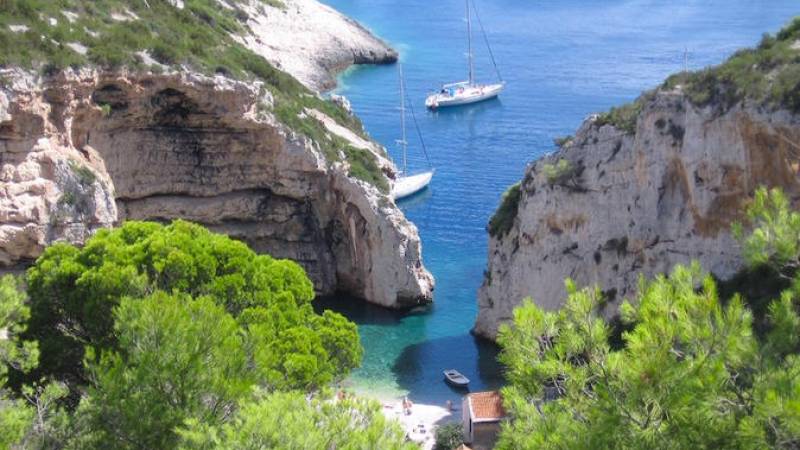 from USD $104.16
Spend a day island-hopping on the Adriatic Sea by speedboat on this small-group day tour from Hvar. Marvel at the ethereal sapphire waters of the Blue Cave, swim inside the legendary Green Cave, and snorkel in Budikovac’s idyllic lagoon and see beautiful Stiniva Bay. No more than ten people on speedboat and twelve on another speedboat will be on this tour to ensure an unforgettable experience.
BOOK WITH CONFIDENCE: As members of ABTA and ATAS we are 100% financially bonded. You can book your day trip with us in absolute confidence, no matter where in the world you are.

The visit inside the Blue Cave on rowboats lasts about five minutes. However the wait to enter the Blue cave can be long, reaching 2-4 hours during high season. There is a Bar and a beach while waiting. We’ll do our best to avoid the crowds, if possible.

Exploring the natural phenomena... Voted for best European beach and more. Worth to see it.... Entering is possible by swimming on the beach.

Perfect spot for swimming and snorkelling or just wandering around exploring the tiny island.

Green Cave is a natural phenomenon, where is possible to swim inside or entering by rowboats (entrance fee).

Last stop on this tour are Pakleni islands. We will stop in one of the bays for swimming and having lunch (not included).

Scoring an average traveller rating of 4.72 out of 5 based on the last 18 recent reviews

“
This tour was amazing! We had 3-4 places to swim throughout the day in these gorgeous settings. Our skipper had interesting facts and stories he shared about the area, his experiences growing up in Hvar, and fun facts about what we saw. The Blue cave really is incredible and not to be missed. He had snorkeling gear and we had ample time to swim, hangout and snorkel in each place. Our lunch stop had plenty of options and things to do. We had the best guide/driver and felt like we really got into the islands that day.”
Daniel M • Submitted 15 Aug 2019

“
Great trip, dispite a bumpy ride due to big waves. Great skipper, Branko. Blue Cave was spectacular, and we were lucky enough to be the only boat inside the cave. Swimming inside the Green Cave was also great. Stiniva Beach/Bay/Cliffs was also magnificent,”
per.tore.strom • Submitted 10 Jul 2018

“
We loved the tour and had a great time with our skippers from Amazing Hvar. They really made the tour better than what was on paper. We loved swimming in the caves, the different beaches and good vibes from the tour guides :) Highly recommend!”
Erin N • Submitted 10 Jul 2018

“
The surrounding Hvar islands are beautiful and a must see if in the area. Our trip was wonderful and the skippers were great at taking care of us. Only downside was that the sea was quite choppy on the day we went out and so we all got soaked crossing the channel - apart from this, the trip was amazing”
namstorm • Submitted 09 Jul 2018

“
Lovely day spent on board the speedboat! Very kind skippers, relaxed, knowledgable and helpful. Blue cave was only open in the morning so the skippers changed our itinerary to make sure we could get there. Very grateful as we managed to get in before the tide was too high. In response to a previous review I will say that you should remember this is a speedboat. Its bouncy, bumpy and you will get wet... all part of the fun! Recommended.”
Charlotte M • Submitted 14 Jun 2018

“
We had a great day visiting all the smaller islands around Hvar. It was a nice and relaxing day where the agenda was not too jam packed. The highlight was definitely the Blue Cave, although I wish we could have stayed longer inside! Some of the people on our boat also went swimming and snorkeling during some of our stops. Our skipper was great - very attentive and accommodating. The speedboat was also really nice and you can tell that it's well-maintained. They had everything - waters, fruit, and even had jackets for us to use since it gets pretty windy during the boat ride. Would recommend taking this tour if you would like to explore outside of Hvar for a day!”
Sharlene Y • Submitted 13 Oct 2017

“
This tour was great! Despite the Blue Cave being closed, we really enjoyed it. We came across a large group of dolphins, spent time exploring Komiza and loved zipping along the water. The guides were knowledgeable and due to our small group, we were able to know the other people on the tour. I would highly recommend this tour to anyone looking for a fun way to see this part of Croatia.”
Shannon M • Submitted 07 Oct 2017

“
My wife and I did a one day speedboat tour from Hvar in August. It was our favorite day of our two weeks in Croatia! There were 10 of us total on the boat including our captain Tony and his wife who was our guide. The boat was very comfortable. We left in the morning from Hvar and our first stop was a small island to do some snorkeling. Tony prepared some fresh sea urchin for us to try- delicious! From there we continued on towards the blue cave. The views were absolutely amazing, the color of the water in indescribable. We toured the blue cave unreal! plus we lucked out with no wait then continued on to Stinivia Bay on the island of Vis paradise, but the word is out. Our last stop was a beach in the Pakleni islands- definitely a party spot and a fun place to grab a drink. We were sad when our day came to an end back at the port of Hvar. This is a must do excursion!”
Justin G • Submitted 16 Sep 2017

“
We had a super day! Orshka and her skipper were delightful! It was so great to be in a small group as the day was tailored to us. The locations we went were spectacular and the boat was really great. Thank you!”
Shelly H • Submitted 08 Aug 2017

“
I would highly recommend this tour to anyone visiting Hvar. We were able to see both the blue and green caves as well as a few small islands around Croatia. Our tour guide Philip was very laid back and made it a relaxing and enjoyable experience.”
Elizabeth G • Submitted 03 Jun 2017

“
The blue cave is really unbelievable and definitely worth seeing. It is a long wait to actually get into the cave, but if you take that time to relax on the nearby beach it really goes quickly. The green cave is not on the same level as the blue cave, but you can swim in this one and it did offer a nice opportunity for cliff jumping. On the ride back from the caves we stopped at 4 different island/beaches for about 30-45mins at each one. The stops were quick, but each one was unique and gave you an idea of where you might want to come back to spend more time on your. The boat ride in and out of the islands to these hidden beaches was my favorite part of our trip.”
Kevin M • Submitted 28 Aug 2016

“
This tour is more of a transport than a proper tour. Entrance fees to the Blue and Green Caves are not included and we were mostly just shuttled around. The beaches we visited were nice. Lunch (not included) was good but a bit overpriced. Unfortunately the skipper left us all standing on the dock after the Blue Cave for a half hour as we tried to flag him down to no avail. If you go on this tour make sure to get the Skipper's phone number!”
David H • Submitted 15 Jul 2019

“
The tour guides were really awesome! The blue cave was very blue hahah and fabulous to see but be prepared to sit around waiting up to 2.5hrs for tix to get on the smaller boat to get into the cave. Worth it for once in life time viewing. Wish more time to explore other islands and tiki bars.”
Valerie F • Submitted 02 Oct 2017

“
We booked this tour last minute hoping to see the Blue and Green Caves. Unfortunately not the fault of the company, both of the caves were closed on the day we booked, possibly due to the rough seas, but our skipper made up for it by filling the 8 hours with stops at other islands. Before we started, they offered a full refund in case anyone wanted to cancel due to both caves being closed which was nice. Our skipper was personable and entertaining and you could tell he wanted all of us to have a great time. On our first stop, he caught an octopus and sea urchin and let anyone who wanted to hold the octopus and eat the caviar inside the urchin. Since the caves were closed, he took us to about 4-5 other islands, and we stayed at some for over an hour. Typically, I think youd only get to stay for 30 mins if the caves were open, so it was nice to not feel rushed. At each stop, we could swim, have a drink at the bar, or just sunbathe on the beach. Our last stop at Palmižana may have been my favorite as the entire group ended up at the same bar and had some amazing drinks and good conversation. Even though both the blue and green caves were closed, and the main reason we booked this tour, Id recommend it as we still had a great day checking out many other places that you wouldnt normally get to see while in Hvar.”
Matt L • Submitted 18 Jul 2017

“
Firstly the tour stated that a small group of 8 people would be on the tour... we were 12 in total and the boat was a a rubber speedboat. So there was no space to laze in deck as everyone was squashed in together. At first we thought this boat was taking us to the tour boat but we soon found out it was not so. The skipper Leon was very kind but seemed oblivious to the fact that those sitting at the back were getting absolutely drenched. Not even the jacket they provided could help. I spent most of the trip with the jacket over my head to avoid being continuosly drenched as the salt water stings. The actual tour of the Blue Cave was very nice but on our return trip having now dried out at lunch time we found ourselves in the same position of being thorougly drenched. This honestly was not a fun outing.”
Lynette S • Submitted 31 May 2018