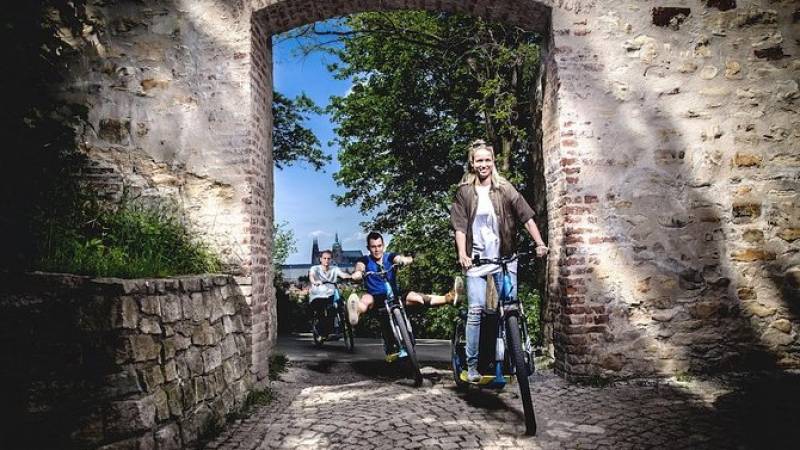 from USD $47.78
It's fun, safe and easy!       We are young, experienced local staff and we like to show the most iconic sights in an unique and informative way. Some history, some personal stories, stunning views, day life and night life information, fun and fast e-scooter ride, tips for best shopping or interesting exhibition? Yes and much More!

10 years of experience and 100% professionalism in our DNA are our secret ingredients for your perfect holiday.

Enjoy Prague on escooter.
BOOK WITH CONFIDENCE: As members of ABTA and ATAS we are 100% financially bonded. You can book your day trip with us in absolute confidence, no matter where in the world you are.

The oldest stone bridge of Prague with many legends regarding the construction and its decoration is the top 5 dominant of Prague. And the starting point for the E-scooter Grand City Tour is literally two steps from there.

The first stop of our E-scooter tour is the Lennon wall. It is the only wall in Prague where is allowed to paint graffiti. If you have a strong feeling to express yourself, bring a spray and pull your emotions out!

Kampa is actually an island in the Mala Strana neighborhood. It is a piece of land between river Vltava and river Certovka. Certovka means Devil stream in Prague. Want to know why? Wait for the tour!

There are hundreds of churches in Prague, in fact there are about 250 churches in the historical city centre. One of the most interesting ones is definitely St. Nicolas church. Beautiful baroque church with stunning interior decoration.

During the Grand City tour you visit two parks of Prague: Letna and Petrin. Both are hills and both offer a stunning view to the city.

One of the nicest views of our Grand City Tour is definitely from the bellvue underneath of the Strahov Monastery. Its history goes back to the 9th century and beside of very valuable library, this monastery is very famous for its monastic brewing production.

We won't get in the Prague Castle during the e-scooter tour, but our guide will tell you all the interesting stories about this oldest and biggest building of Prague.

The park in Letná is the second largest park in Prague 7. A public park was founded there at the second half of the 19th century according to the design by B. Wünscher and J. Braul. The name was derived from the word Leteň, which means “Sunny Hill”. Letná Park is the largest non-built-up green area in Prague, where people can spend their free time doing sport, taking a walk or having a picnic. Letná Park provides an enchanting view of the Vltava River and the city.

The Metronome of Prague is a kinetic sculpture by Vratislav Novák, installed at the place of the former Stalin Monument above Čech Bridge in Letná, Prague, in 1991. Together with the pendulum it is 25 metres high and weighs 7 tonnes.

Stop At: Convent of St Agnes of Bohemia, U milosrdnych 17, Prague Czech Republic

The Convent of Saint Agnes, also called Na Františku, is situated on the right bank of the Vltava River in the historic area of the Old Town. The monastery of Poor Clares of the Order of Saint Clare and Francisians was probably founded in 1231 by Agnes of Bohemia, who also became the abbess of the convent. The convent architecture was especially influenced by two circumstances. First, it was the fact that its founder came from a royal family and thus had enough funds and political influence, and second, the fact that she was brought up in convents so she knew that lifestyle very well and also knew all the conditions concerning the practical use of the buildings. As a result of those circumstances, the convent had a strikingly generous conception from the very beginning

Old Town hall has allways been the central spot of Prague. Demonstrations took place nearby, political prisoners used to be inprisoned in the cellars and now is under daily attack of thousands of tourist for its astronomical clock with the saints puppet show. but there is more to know about this place and you get the complete information on the Grand City Tour

Busy during the day, dangerous at night, that is famous Wenceslas square of Prague. It was completely rebuilt hundred years ago so the actual look of the squere is more likely modern. There are two important sights though. Monumental building of National Museum and equestrian statue of Czech saint patron St. Wenceslas.

National Theatre of Prague is one of the dominants of Prague. Its golden crown on the roof is visible from everywhere. If you like balet or opera, this is the right place to go.

“
Had a wonderful time. It was a bit cold but fun all the same. Would highly recomend taking the tour and if I was there in the summer would do the full 3 hour tour.”
Jax • Submitted 05 Feb 2020

“
So much fun and massively informative. We had a brilliant tour with Rene, who was a great guide. Definitely do this.”
Kerry W • Submitted 29 Oct 2019

“
A truly great way to see the sites of Prague. Our Guide Jachym, spoke very good English and shared with us the "just right" amount of historical knowledge of the sites we visited. The E-Scooters were fun and easy to operate/navigate through the narrow/crowed streets. we covered signficantly more ground than you could cover walking. The beverage stop near the Prague Castle gave us great views across Prague. The tour gave us a much better idea as to what we wanted to spend time seeing. We would recommend this tour to all.”
murray h • Submitted 07 Oct 2019

“
This is a really fun tour around Prague. The tour takes you to all the major spots in Prague and we really liked going across the river to the parks on the hillside with fabulous views of the city. The kids said it was their favorite tour. I highly recommend the tour and Ivan out tour guide was very friendly and knowledgeable about Prague.”
Diannechavannes • Submitted 07 Aug 2019

“
This is a fantastic way of seeing the sights and having a bit of history along the way if you don't have much time to spare.”
LJ T • Submitted 03 Jul 2019

“
Ondra Novotný was our tour guide and was fantastic. We were a group of 4 and did this tour early in our trip. We're glad we did. He showed us all the things to see in Prague including a few "off the beaten path" type things to see. Would absolutely do it again. Make sure you ask for Ondra!”
Sean S • Submitted 03 Jul 2019

“
This was a great tour, great value - fantastic way to see the city particularly when it's high tourist season. Klara, our guide, was very very good - knowledgeable, fluent, flexible. We are older adults (55 and 65) and the bikes/scooters were super easy to learn and handle. I highly recommend.”
Linda B • Submitted 03 Jul 2019

“
Let me take this opportunity to thank Alex for taking us on a wonderful trip on the E scooter all along Prague. It was an amazing experience , only marred by the intense heat and sunshine over which we had no control. Despite that it was an exciting , fun filled and educational journey and Alex showed us all of the varied colors of Prague. It was relatively easy to drive the e-scooty and we enjoyed it fully. Highly recommended for everyone visiting Prague”
hsl • Submitted 19 Aug 2018

“
I can highly recommend this sightseeing by escooters. uphill, downhill no problem. we had a fantastic tour guide, Andre! he showed us his city in a very symapathetic way.”
gega_97 • Submitted 10 Jul 2018

“
Booked this tour on Viator/Tripadvisor reviews for my family. It did not disappoint! The e-scooters were fun and easy to ride, and allow you to go uphill to get to the beautiful views of Prague that the segways do not. Ondra F. was a terrific tour guide. Young and full of personal stories, he held the interest of my teen-aged boys and made the tour very enjoyable. The three hours passed quickly and we felt like we saw all the sites and got amazing photos. It was the highlight of our stay in Prague! Highly recommended.”
Mark Carol Sato • Submitted 08 Jul 2018

“
Great way to spend 3 hours and see the city-the scooters are easy to navigate and extremely fun to ride. Alex, our guide, was very knowledgeable and made the tour extremely enjoyable. We were able to see parts of the city we otherwise wouldn't have, and were able to get some great views.”
Ethan W • Submitted 08 Jun 2018

“
This was a blast! The sights were beautiful and Noah was an excellent tour guide.”
Melissa C • Submitted 02 Apr 2018

“
This tour exceeded our expectations. Noa was an amazing tour guide and took us to places we never would have seen had we not been on the e-scooters with him. We did multiple tours in Prague and this was definitely a highlight. It was cold so we stopped along the way for some hot wine. Definitely a tour I would recommend and do again!”
Virginia B • Submitted 11 Mar 2018

“
Alex was our fantastic guide who was full of interesting facts and humour. We had 3 hours of fun with great guidance around this very beautiful city. If you get the opportunity this is a must.”
lynne.coop • Submitted 28 Nov 2017

“
This was a fun tour of the lesser traveled areas of Prague. Adel was a wonderful tour guide, spoke perfect English and the historical and current day information she gave to us was great. We took the ride up the hills to the Kampa Park and Prague Castle, to see wonderful views of the river and city views which are fantastic. Prague is a city of a hundred Church spires, and we could see them all. Great way to spend a half day.”
Chris • Submitted 03 Nov 2017

“
Wow what a great afternoon with Alex. This was one of the highlights of our trip, a terrific family experience. We highly reccomend this scooter tour.”
Matthew S • Submitted 22 Oct 2017

“
OMG it was amazing and so much fun!!! I would definitely recommend it. It is a fabulous way to see the beautiful city of Prague and to navigate the little, cobbly streets of Prague. Our tour guide was drop dead handsome and very knowledgeable about his city.”
christine.t08 • Submitted 15 Oct 2017

“
What can I say, Ivan was an amazing tour guide. He showed us many things about Prague. My wife and I had such a great time this is an amazing way to see the city.”
branmanchu • Submitted 10 Oct 2017

“
Great way to see some sights in good time.. Rene was very good guide and knew a lot about the city and history. We loved it”
Jenny G • Submitted 27 Sep 2017

“
We took this tour in late August 2017. Martin was our guide for the day. There were just 4 of us on the tour. We loved it! Martin was excellent, very knowledgable and funny. He spoke excellent English having been educated for several years in England. The E Scooters were great fun and easy to use. It was an excellent day out and a great way to see the lovely city of Prague. Martin went out of his way to make our day fun and even took us to some lovely gardens after the tour was finished! Thoroughly recommend this tour.”
Natasha C • Submitted 09 Sep 2017

“
Adel was a great Tour guide and the escooter is the funnest way to see the city. If you want some great pictures of the city than the tour is worth your time.”
Danny K • Submitted 08 Sep 2017