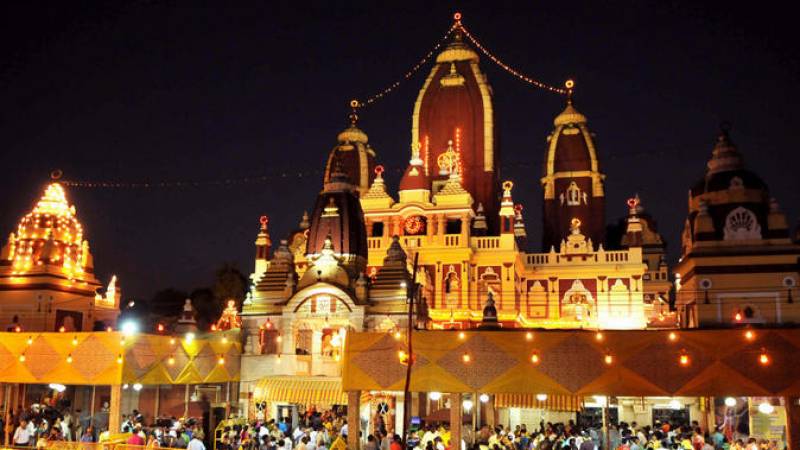 from USD $44.55
The charms of India's capital city Delhi take on a remarkably different dimension at night. Travel by private air-conditioned vehicle and enjoy the services of your local English-speaking driver who is a city expert.
BOOK WITH CONFIDENCE: As members of ABTA and ATAS we are 100% financially bonded. You can book your day trip with us in absolute confidence, no matter where in the world you are.

you will be pickup from your center located hotel within Delhi and take you to this Beautiful Tour.Which includes Dinner.

India Gate (originally called the All India War Memorial) is a war memorial located astride the Rajpath, on the eastern edge of the "ceremonial axis" of New Delhi, formerly called Kingsway.

India Gate is a memorial to 70,000 soldiers of the British Indian Army who died in the period 1914–21 in the First World War, in France, Flanders, Mesopotamia, Persia, East Africa, Gallipoli and elsewhere in the Near and the Far East, and the Third Anglo-Afghan War. 13,300 servicemen's names, including some soldiers and officers from the United Kingdom, are inscribed on the gate. The India Gate, even though a war memorial, evokes the architectural style of the triumphal arch like the Arch of Constantine, outside the Colosseum in Rome, and is often compared to the Arc de Triomphe in Paris, and the Gateway of India in Mumbai. It was designed by Sir Edwin Lutyens.

In 1972, following the Bangladesh Liberation war, a small simple structure, consisting of a black marble plinth, with a reversed rifle, capped by a war helmet, bounded by four eternal flames, was built beneath the soaring Memorial Archway.

The Laxminarayan Temple, also known as the Birla Mandir is a Hindu temple up to large extent dedicated to Laxminarayan in Delhi, India. Laxminarayan usually refers to Vishnu, Preserver in the Trimurti, also known as Narayan, when he is with his consort Lakshmi. The temple, inaugurated by Mahatma Gandhi, was built by Jugal Kishore Birla from 1933 and 1939. The side temples are dedicated to Shiva, Krishna and Buddha.

It was the first large Hindu temple built in Delhi. The temple is spread over 7.5 acres, adorned with many shrines, fountains, and a large garden with Hindu and Nationalistic sculptures, and also houses Geeta Bhawan for discourses. The temple is one of the major attractions of Delhi and attracts thousands of devotees on the festivals of Janmashtami and Diwali.

Gurudwara Bangla Sahib (listen) is one of the most prominent Sikh gurdwara, or Sikh house of worship, in Delhi, known for its association with the eighth Sikh Guru, Guru Har Krishan, as well as the pool inside its complex, known as the "Sarovar." It was first built as a small shrine by Sikh General Sardar Bhagel Singh in 1783, who supervised the construction of nine Sikh shrines in Delhi in the same year, during the reign of Mughal Emperor, Shah Alam.

It is situated near Connaught Place, New Delhi on Baba Kharak Singh Marg and it is instantly recognisable by its golden dome and tall flagpole

Later drive to Old Delhi to Click some Nice Picture of Red Fort is a historic fort in the city of Delhi in India. It was the main residence of the emperors of the Mughal dynasty for nearly 200 years, until 1856. It is located in the center of Delhi and houses a number of museums. In addition to accommodating the emperors and their households, it was the ceremonial and political center of the Mughal state and the setting for events critically impacting the region.

After Enjoy the Dinner in Local Restaurant with quick stop-our at Jaima Masjid.

Traveler pickup is offered
Pickup from a centrally located meeting point or Hotel in Delhi.

Scoring an average traveller rating of 3.5 out of 5 based on the last 10 recent reviews

“
This tour was awesome! We saw the New and Old Delhi by car at night and we even got out of the car to see some monuments from the outside . Our driver Mr. Sagir was so awesome and awser every question we had. This was so good for our first day in Delhi.”
Rita D • Submitted 07 May 2016

“
Excellent tour, Sikh Temple was particularly enjoyable. The guide was very knowledgeable and friendly, even taking in the India Gate at night at my request. Well worth the money.”
Mark P • Submitted 21 Jan 2016

“
Great tour guide great customization so you aren't seeing a whole bunch of things you don't want to see. Loved it. Will do it again”
Marcus S • Submitted 22 Dec 2015

“
The tour at night is nice, you get to see the main important buildings and locations with a typical dinner included The waiting for the food at Conaught Place in a local chain restaurant Haldrim's is dull, but it's worth it because the Tali-special is a sampler of many plates and defenitely leaves you satisfied. Overall, the tour has a good cost benefit ratio cause in a relatively short time the evening you get a good idea of Delhi at night which is the purpose of it all.”
Renan • Submitted 01 Jan 2018

“
Very Nice, the guys were polite and knowledgeable about the sites and very helpful for photos. But what let this experience down was how pushy they were on the way back to the hotel- the driver keep asking us how many stars we how give them and what we would say. It made the drive back to the hotel uncomfortable, as he just kept asking for 5 stars and saying to give them 5 stars. Other tours I have done, just ask/reminder me to rate them at the end.”
Kallie G • Submitted 23 Jan 2017

“
We extend by 2 hours and pick up and drop off at airport. Company agreed,need pay $15 extra. No problem. good points- quick way to see some buildings in Delhi ( not just from the car) Bad points : guide limited knowledge ,not helpful and at times rude. Finished 2 hours early, still asked for extra $”
superheroalex • Submitted 01 Jun 2016

“
This tour was ok. But could have been better. Driver very nice, only a driver, dont understand why pay so much for this, if i Had known id only take a taxi and it would have been cheaper. NO GUIDE. ONLY A DRIVER. what is this??? Going alone to all places THIS NOT WORTH IT. Dont do it, take a taxi instead.”
Ana S • Submitted 01 Mar 2018

“
Guide was nice enough but spoke very broken English and was of his own admission relatively new to Delhi and consequently had little information to convey. Typical sightseeing stop was along the lines of this India Gate...take a picture? We bailed out of the tour and returned to our hotel early.”
Kevin B • Submitted 27 Feb 2018