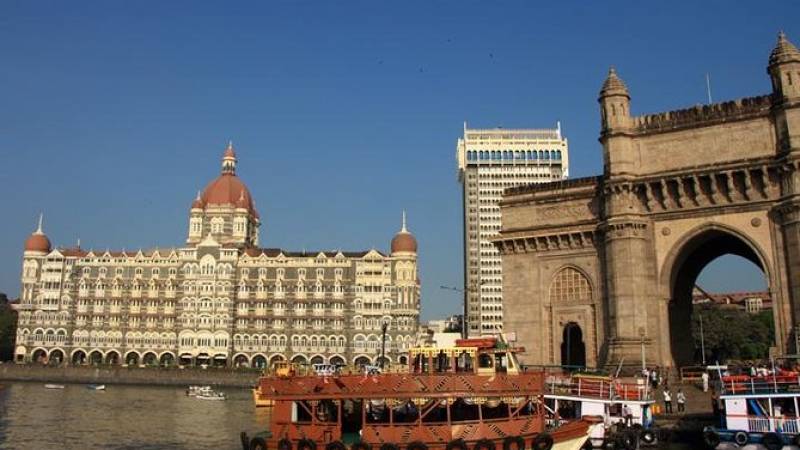 from USD $189.20
Discover the wonders of Mumbai - some of the city's most popular destinations Including excursion to the intricate rock carved temples of Elephanta Caves and Mumbai city highlights like The Gateway of India, Chhatrapati Shivaji Terminus (CST) formerly Victoria Terminus, Mahatma Jyotiba Phule Mandai Market (Crawford Market) earlier named after Arthur Crawford, Marine Drive also known as Queens Necklace, The Hanging Gardens also known as Pherozeshah Mehta Gardens, Mani Bhawan Highlighting Gandhi's life, Dhobi Ghat is a well known open air laundromat in Mumbai and Prince of Wales Museum.
BOOK WITH CONFIDENCE: As members of ABTA and ATAS we are 100% financially bonded. You can book your day trip with us in absolute confidence, no matter where in the world you are.

Your day starts with morning pickup at your hotel, airport or sea port and transfer by private air-conditioned vehicle to the Gateway of India and harbor. There, board the ferry for the ride to Elephanta Island, home to the World Heritage-listed Elephanta Caves. The ancient cave temples date to the fifth century, carved with stunning reliefs and statues that honor the Hindu god Shiva.

Return to the city and visit the Gateway of India, This bold basalt arch of colonial triumph faces out to Mumbai Harbour. It was built to commemorate the 1911 royal visit of King George V.

Later enjoy lunch at a local restaurant (own expense).

View the UNESCO-listed Victorian Gothic masterpiece of Chhatrapati Shivaji Maharaj Terminus (CST), Imposing, exuberant and overflowing with people, this monumental train station is the city’s most extravagant Gothic building and an aphorism of colonial-era India.

Previously known as Crawford Market is the largest in Mumbai, and contains the last whiff of British Bombay before the tumult of the central bazaars begins. Fruit and vegetables, meat and fish are mainly traded, it's also a touristy spot to stock up on spices.

Photo stop at Marine Drive - Lined with flaking art deco apartments, it’s one of Mumbai’s most popular promenades and sunset-watching spots. Its twinkling night-time lights have earned it the nickname ‘the Queen’s Necklace’.

Also known as Pherozeshah Mehta Gardens, are terraced gardens perched at the top of Malabar Hill, on its western side, just opposite the Kamala Nehru Park. They provide sunset views over the Arabian Sea and feature numerous hedges carved into the shapes of animals.

As poignant as it is tiny, this museum is in the building where Mahatma Gandhi stayed during visits to Bombay from 1917 to 1934. Exhibitions include his personal room, a photographic record of his life, along with dioramas and documents, such as letters he wrote to Adolf Hitler and Franklin D Roosevelt and tributes from Ho Chi Minh and Albert Einstein.

This 140-year-old dhobi ghat (place where clothes are washed) is Mumbai’s biggest human-powered washing machine, every day hundreds of people beat the dirt out of thousands of kilograms of soiled Mumbai clothes and linen in 1026 open-air troughs. The best view is from the bridge across the railway tracks near Mahalaxmi train station.

Formerly known as the Prince of Wales Museum, it was designed by George Wittet — who incidentally was also the brains behind the Gateway of India. Apart from the gorgeous architecture, the museum is known for harbouring artefacts from the Mughal empire, as well rare heirlooms from Europe, Nepal, Tibet, Japan, and China.

After viewing some of India’s most precious historical art here, your tour concludes at the starting point or other desired location in Mumbai.

After viewing some of India’s most precious historical art here, your tour concludes at the starting point or other desired location in Mumbai.

Scoring an average traveller rating of 4.75 out of 5 based on the last 24 recent reviews

“
Well planned tour with experienced guide telling you all you want to know about Mumbai. Nice ferry trip to the caves”
Daniel S • Submitted 30 Oct 2019

“
Ms. Nassem gave a great tour in the perfect amount of time. She was very knowledgeable of the city and the attractions. She was flexible for the changes we made on the fly. The driver was very attentive and the car was very clean. We would recommend this tour.”
Jacqueline F • Submitted 22 Mar 2019

“
My all day Mumbai Tour Was excellent. My tour guide was very knowledgeable regarding the offshore caves and city sites.”
Bill W • Submitted 11 Mar 2019

“
Elephanta caves and Mumbai tour really came alive for us due to the Knowledge of, Naina Shah, our guide for the day. Naina’s knowledge which she readily shared was incredible, from the history of the carvings in the Hindu Temples, to the attractions in and around Mumbai. Without Naina we would not have seen, or understood all that is central to Mumbai and its history. A long day but well worth the experience!”
Hillary W • Submitted 07 Dec 2018

“
The highlight of the tour was definitely the caves! Our guide was so knowledgeable and let us take our time walking through the monument. She recommended an amazing place for lunch too. After lunch we went to a Gandhi museum. It was small, but so well thought out. Definitely a fun day trip if you have time in Mumbai! Both our driver and guide were excellent!”
carolyniriedel • Submitted 09 Jul 2018

“
My husband and I had a wonderful experience with the Mumbai City Tour - there is a lot to see in Mumbai and our guide made the trip fun and relaxing. We were able to see and experience much more than we would have on our own. Our guide was knowledgable, friendly and helped customize our tour and gave us good advice. We would definitely recommend this tour if you have a short amount of time in Mumbai and want to see the city's highlights.”
Blair H • Submitted 13 Mar 2018

“
Wonderful day in the care of our expert guide, Chetan, and his driver. We saw many areas of Mumbai and learned a great deal about the city's history. The ferry ride and our time on Elephanta Island was very pleasant and interesting. It was just our guide and the 2 of us, so we were able to individualize our day...amazing given the good price. Well worth it, and we'd highly recommend this tour.”
Carla B • Submitted 08 Feb 2018

“
Rupali was an excellent guide! She was caring like a mother and very informative like a good teacher. She was doing much more than her job for me. Definitely request her to be with you :)”
antoniou.andrie • Submitted 16 Jan 2018

“
Highly recommend this tour. Our guide for the day, Chetan, was absolutely brilliant. He had a wealth of knowledge about all the sights we visited during the day and provided deep insights to all of our questions. We have been to Mumbai many many times but we learned so much about the city that we never knew. Thank you Chetan. Also the local guide we had at the Elephanta caves was amazing. He provided a thorough and detailed explanation of everything and not only was he a great guide but also a superb photographer. I will be recommending this tour to all my frlends and family that plan to visit Mumbai as it is totally worth the time and money spent.”
Abhishek P • Submitted 29 Dec 2017

“
Our Tour Guide Ms. Shah was very friendly and knowledgeable. It was a great experience and we enjoyed the tour.”
Rita C • Submitted 04 Dec 2017

“
Wonderful guide and since it was private he had no problem being flexible. We visited all of the promised sites and then some. It was indeed a great day in Mumbai.”
Ronald M • Submitted 12 Nov 2017

“
OUR PVT TOUR IN MUMBAI W/ ELEPAHANTA CAVES WAS MAGNIFICENT EXPERIENCE!! OUR TOUR GUIDE WAS WELL INFORMED and VERY PROFESSIONAL. 5 STAR SERVICE W/ OUR DRIVER. I HIGHLY RECOMMEND A PVT TOUR INSTEAD OF A GROUP TOUR IF YOU WANT TO TAKE YOUR TIME W/O PRESSURE! I ENJOYED TAKING AMAZING PICTURES OF THE GATE OF INDIA, DHOBI GHAT, ELEPHANTA CAVES, and MOST OF ALL THE MANI BAVAN W/C WAS D HIGHLIGHT OF THE TOUR. OUR TOUR EVEN AGREED TO TAKE US ON A SIDE TOUR OF THE TAJ MAHAL HOTEL. THE ONLY DOWNSIDE WAS THE POLLUTION IN THE CITY OF MUMBAI and HARBOUR. BAD FOR PHOTOGRAPHY. BUT W/ MY NIKON D-9 CAMERA I SURVIVED IT W/ MAGNIFICENT PICTURES!! I HIGHLY RECOMMEND THIS TOUR WHO ARE 1ST TIMERS IN INDIA.”
larcy • Submitted 25 Oct 2017

“
This tour is a must for travelers pressed for time. We were able to visit two UNESCO world heritage sites in a day and more. The relevant, important and unusual sites were covered in less than a day. Our guide Sumesh was eloquent, knowledgeable and patient. He was super friendly and was able to answer difficult questions. He was the star of this trip. I was able to see Mumbai in a different light with his explanations. The Elephanta tour was elaborate but easy to digest. I learned so much in this trip because of him. It was a truly an amazing tour!”
Vicente Jr A • Submitted 08 Sep 2017

“
Thank you Ms. Subhalaksami for her professional cares and being knowledgable.”
Patana T • Submitted 08 Jun 2017

“
Experienced all the wonderful sights of Mumbai - seafront promenade, Malabar, English influence on architecture and the wonderful colours different stalls and caves that are still intact in Elephanta Caves after so many years - were just awesome.”
Sonja M • Submitted 09 May 2017

“
The tour was very informative and a really thorough look at life in and the history of Mumbai! I am a big fan of photography and my dad is a fan of history and architecture, so I was very impressed that the guide caught onto that and was able to cater to our interests. The tour guide and driver were also very good at keeping us on time without feeling rushed, since we were seeing a lot of things. Definitely the tour to choose if you have limited time in Mumbai!”
supal • Submitted 15 Dec 2016

“
The unquestionable highlights of this tour are the Elephanta Caves and the Gandhi House. The ferry ride from the Gate of India is very relaxing and offers a chance to mingle with locals, while the Caves is just wonderful. Our guide, Ida Braggs, brought the various panels in the caves to life with her informative and colourful stories. One lowlight for us was the unexpected stop at a local pashmina shop where we were almost harassed to buy scarves and other garments this was not listed in the tour itinerary and it wasted some time which we would've rather spend at one of the museums or even the Victoria Station than mere drive-by visits.”
Willem Hoffmann • Submitted 19 Nov 2017

“
The caves were the best part of this tour. There other stops we made around the city were simply quick to see an area, but there wasn't much to any of the other stops. Our tour guide was very knowledgable and helpful.”
tiffanymtobin • Submitted 26 Oct 2017

“
Very good tour and guide. The tour company was very flexible changing around timings and pick up / drop off times to suit our needs.”
Vindhya J • Submitted 20 Feb 2017

“
we enjoyed our day...would have liked a little more time to shop at the markets.”
gisellecole • Submitted 17 Feb 2017

“
Mumbai is really a very interesting place to be. Unfortunately there was the holy Festival and a lot of attractions were closed. Guide was o.k but with room for improvement.”
juergen.haun • Submitted 05 Mar 2018