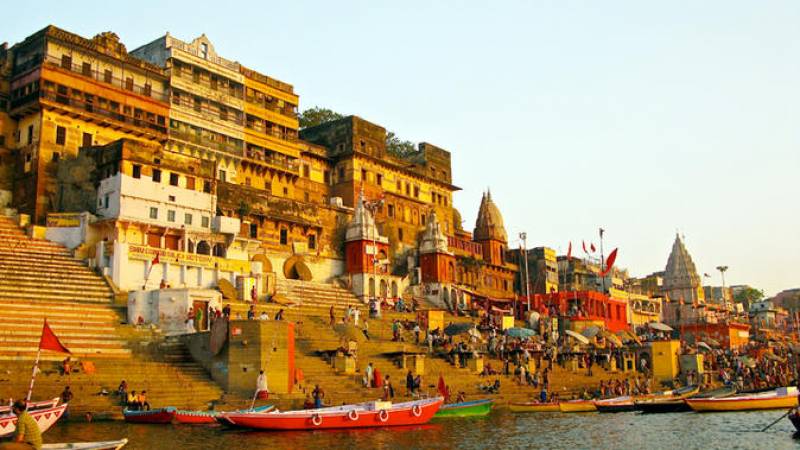 from USD $123.20
Varanasi is the oldest cities in India, often referred as the city of temples or Kashi. Varanasi is situated on the banks of river Ganges in Uttar Pradesh of Northern India. Varanasi is a religious center for Hindus, Buddhists and Jain, and also a center for learning, literature and culture. The lives of the people of Varanasi revolve around the holy river Ganges and its religious significance. The main attractions of Varanasi are the holy Ganges and its Ghats where all the Hindu rituals can be seen being performed by the devotees.

Aarti ceremony performed every day in the evening is treating to watch. Varanasi is also a producer of many Indian legends such as Musician, poets, writers etc. Gautama Buddha gave his first sermon at Sarnath which is near Kashi. According to the many Hindu scriptures, Varanasi is considered one of the seven sacred cities of India. It is believed that the city was founded by Hindu God Lord Shiva.
BOOK WITH CONFIDENCE: As members of ABTA and ATAS we are 100% financially bonded. You can book your day trip with us in absolute confidence, no matter where in the world you are.

Early Morning Pick up from your hotel and transfer to Ghats there you can enjoy a boat ride in the Ganges which gives the magnificent view of the early morning ceremony and prayers on the ghats of the Ganges. Later transfer to Hotel for breakfast after breakfast take some rest and 10:00 Am proceed to  enjoy the pleasure trip to Sarnath few kilometres from Varanasi. This destination holds great religious importance of Buddhists. Here Lord Buddha lectures his Varanasi Temple Toursfirst sermon to his disciples. A tombstone is built in the deer park where Lord Buddha gave his first sermon. Emperor Ashoka, a dedicated Buddhist and Preacher of Dhamma had built a number of stupas and Chaityas here which exists even today. Most prominent amongst these are the Damekhstupa built in the year 249 BCE and the Chaukhandistupa built in 5th century AD. The Sarnath museum is home of many Buddhist ruins and artifacts. It is also the proud keeper of the Ashok Stambha, the national emblem of India. Afternoon back to the hotel for lunch. Evening pick up from the hotel and transfer to ghats for evening ceromany. Later transfer to Hotel.

Traveler pickup is offered
We provide Hotel or Airport Pick up as per guest requirement.

Airport or your City Hotel