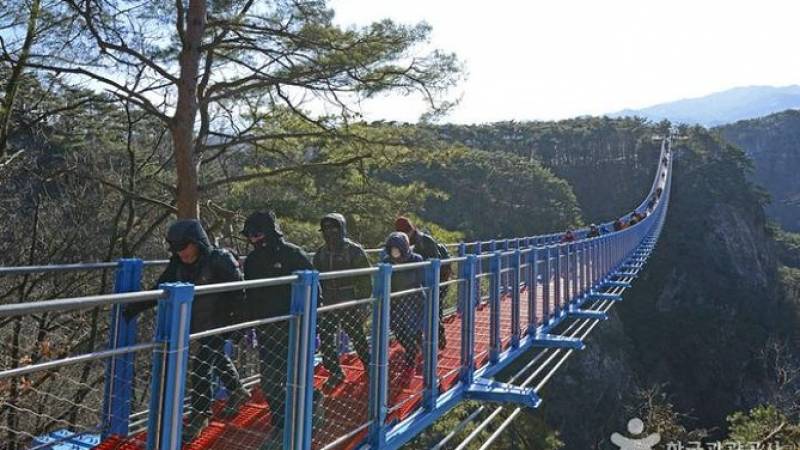 from USD $55.00
Experience a day full of excitement and romance in the cities of Gangwon Province. The tour will take around 11 to 12 hours and visit three attractions in a day. Firstly, will meet up at three spots of central Seoul and then will head to Wonju for the Suspension Bridge. The ride will take around two hours with an air-conditioned coach/minivan. After that, will reach Wonju Maze Jungang Market for lunch and finally end the day with romantic OOOZOOO Starlight Garden.
BOOK WITH CONFIDENCE: As members of ABTA and ATAS we are 100% financially bonded. You can book your day trip with us in absolute confidence, no matter where in the world you are.

8:00am Depart from Myeongdong Station Exit 2

9:20am Arrive at Hwadam Botanic Garden

Hwadam Botanic Garden is an eco-friendly arboretum located within Konjiam Resort in Gwangju. "Hwadam" can be translated into "a friendly communication", a name given to the forest in hopes that the area serves as a mean for people to communicate with nature, while the forest offers an environmentally friendly atmosphere.

On the second floor of Wonju Joongang Market, there is an old building that named as "Maze Art Wonju Central Market". There is also a "Free Market" and a traditional market nearby where you can taste seafood pancake(sesfood cheon) and other market food.

The Suspension Bridge of Wonju Sogeumsan Mountain is the longest Bridge in Korea and boasts a length of about 200m which the view looks like the lower cliff is amazing.

“
If you wanna explore some places besides those popular one, the tour is a good choice. It's refreshing to have a walk on Sogeusan. The Chungju light world is amazing. I really enjoyed the light and music show there. The tour guide, Finn, is very friendly, informative and caring. He speaks fluent English so there's no problem of communication.”
Tsz Ying Y • Submitted 26 Mar 2019