Explore Istanbul and discover the legacy left behind by the Ottoman Empire, from the opulent Topkapi Palace to the stunning Blue Mosque. Plus try your hand at bargaining at the Grand Bazaar on this Istanbul Half Day Tour.

Sightseeing and entrance fees as detailed in the itinerary
Return transfers from your designated pick-up point in a private air-conditioned vehicle
Escorted by an English speaking, degree qualified Turkish tour guide

International flights and visa
Transfer pick-up outside of Taksim & Old City. Hotels outside this region require additional transfers.
Tip for your tour guide. We recommend you allow USD$5-10 per person. Tipping your guide is an entirely personal gesture

Start the day at the magnificent Topkapi Palace, which was the royal residence of Ottoman Sultans for almost four centuries. Originally constructed between 1460 and 1478, the lavish palace boasts four lush courtyards made up of pavilions, kitchens, barracks and kiosks; an impressive treasury with an assortment of treasures and artefacts; and fantastic views over the Sea of Marmara. Plus don’t forget the palace’s most famous attraction, the Harem, what would have been the imperial family’s private quarters.

Next stop is the stunning Blue Mosque, boasting voluptuous curves, six towering minarets, and a large walled courtyard. The interior of the mosque is equally impressive, with luminous stained-glass windows, soaring domed ceilings, hanging chandeliers and fine blue iznik tiles. The Blue Mosque is still an important religious sanctum, and sees countless worshipers pass through its main doors every day. There is also a small mosque on the corner of the complex that houses the tomb of Sultan Ahmed I. End the day at the behemoth Grand Bazaar, a chaotic labyrinth of lanes, mosques, boutiques, artisan workshops, and market stalls. Browse the shops, try your hand at bargaining, and try a cup of the thick sweet Turkish coffee. 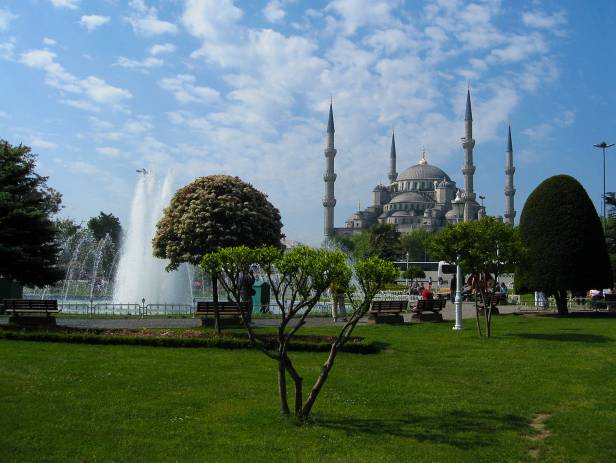