Gain insight into the Roman way of life at the vast classical site of Ephesus. Visit the impressive Great Theatre, wander the ruins of the Temple of Serapis, view the spectacular Library of Celsus and see the remains of the Temple of Artemis. Plus visit the simple and quaint House of the Virgin Mary on this Turkey Day Tour.

Ephesus - one of the largest and best-preserved ancient cities in the Mediterranean, with the Great Theatre, Temple of Serapis, Library of Celsus and Temple of Artemis
House of the Virgin Mary - restored sacred site set on the slopes of Mount Koressos, thought to be the final home of the Virgin Mary

Sightseeing and entrance fees as detailed in the itinerary
Return transfers from your designated pick-up point in a private air-conditioned vehicle
Escorted by an English speaking, degree qualified Turkish tour guide

Tip for your tour guide. We recommend you allow USD$5-10 per person. Tipping your guide is an entirely personal gesture
International flights and visa

Set out to explore the vast classical site of Ephesus, one of the largest and best-preserved ancient cities in the Mediterranean. Once a major metropolis under Roman rule, today Ephesus offers intriguing insight into the Roman way of life. Marvel at the scale of the Great Theatre, view the remains of the Temple of Serapis, and gaze upwards at the spectacular Library of Celsus. Plus don’t forget the ruins of Temple of Artemis – also known as the Temple of Diana – one of the Seven Ancient Wonders.

Next venture just outside of Ephesus to visit the House of the Virgin Mary, a restored sacred site set on the slopes of Mount Koressos. The foundations of the building are thought to date back to the 1st century AD, and its original building is believed to have been the final home of the Virgin Mary. The shrine is simple and quaint, and still draws both Christian and Muslim pilgrims every year. 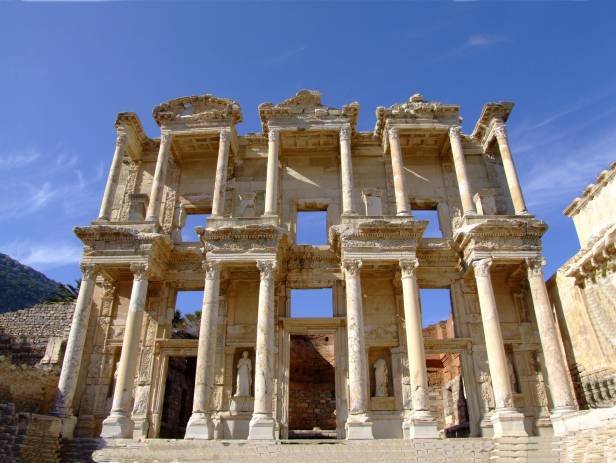