Take your place at the famed mask dance performances at the Thimphu Tshechu Festival, whilst discovering the best of Bhutan. Hike to Tiger's Nest Monastery, see the world's biggest Buddha Dordenma statue and explore the Punakha Valley before sitting back to watch the unique and colourful displays of traditional culture performed at the city's most popular event.

Thimphu Tshechu Festival - see the colourful masked dance performances and other cultural displays at the city's most popular event
Punakha Valley - Hike up to Chimi Lhakhand Temple (the temple of Divine Madman) and camp next to scenic Mo Chu River
Dochula Pass - Himalayan peaks - Masagang, Tsendagang, Terigang, Jejegangphugang, Gangkar Punsum
Handicraft Emporium - Browse through beautiful hand-woven and crafted products in Thimphu
Paro - Enjoy a guided tour of the city, including the National Museum and Rinphung Dzong
Picturesque villages of Talo or Nobgang - where we explore the ancestral home of the Queen Mothers of Bhutan
Thimphu - Explore Bhutan’s capital city including, the Memorial Chorten, Kuenselphodrang, a handmade paper factory and Drubthob Nunnery
Tiger’s Nest Monastery - Hike up to this famous Buddhist monastery, perched on a cliff face

7 breakfasts, 7 lunches and 7 dinners
Airport arrival and departure transfer on day 1 & day 8 (only)
Traditional Bhutanese dinner at a farm house, giving you the opportunity to interact with a local family
All relevant transfers and transportation in private A/C vehicles
All Bhutan government royalties and taxes
6 nights 3-4 star hotels and 1 night camping near the banks of scenic Mo Chu River
Guided sightseeing of Paro, Thimphu, Punakha and the Punakha Valley
Escorted by a licensed English-speaking local tour guide
Entrance fees to all included sightseeing
Bhutan Visa fee and travel Permit (excludes visa admin fee of USD$40 pp, payable upon arrival)

Thursday 21 September 2023. Welcome to Bhutan! Upon arrival to Paro Airport you'll be met and transferred to our hotel. The remainder of today is free for you to independently explore.
Overnight: Paro  |  Lunch, Dinner

Paro – Punakha. It's an early start as we travel the road to Punakha, climbing up through pine, oak and rhododendron forest to reach Dochu La Pass (3050m). After a short break we continue onto the spectacular Punakha Valley, where we enjoy a scenic 1.5 - 2 hour walk up to Chimi Lhakhang Temple - dedicated to Lama Drukpa Kunley (also known as the Divine Mad Monk).

After, we visit the impressive Punakha Dzong an exemplary masterpiece of Bhutanese architecture built at the confluence of the Pho Chu and Mo Chu Rivers. Later this afternoon we head to our campsite on the banks of the Mo Chu River, where there's free time to relax and explore the natural surrounds. In the early evening you can opt for a hot stone bath served with local drinks, followed by dinner.
Overnight: Punakha  |  Breakfast, Lunch, Dinner

Punakha Valley – Thimphu. After an early breakfast, we drive along the shores of the Mo Chu River and hike (approximately 2 - 2.5 hours) up through rice fields to the Khamsum Yuelley Namgyal Chorten, a stunning temple located on a hill with impressive views of the valley below. After exploring the area, we drive to the picturesque villages of Talo scattered along a ridge above the Punakha Valley.

This afternoon, we stop for a picnic lunch before visiting Sangchen Dorji Lhendrup Nunnery, perched on a ridge with spectacular views of the Punakha and Wangdue Valleys. In addition to religious training, the nuns are also taught skills such as embroidery, tailoring and statue making. After our visit to the nunnery we drive to Thimphu.
Overnight: Thimphu  |  Breakfast, Lunch, Dinner

The Tshechu Festival of Thimphu is a 3 day religious event which marks the tenth day of the lunar calendar and honours the birthday of Guru Rimpoche Padmasambhava, an Indian Saint who spread Buddhism in the country in the 8th century. Tshechus are grand occasions where entire communities come together to witness religious mask dances, receive blessings and socialise. It is said that anyone who attends a Tshechu and witnesses the colourful masked dances is profusely blessed. Every mask dance performed has a special meaning or a story behind it and many are based on stories of the life of the Guru.

Today, we drive to Tendrelthang at Tashichho Dzong and mingle with the residents of Thimphu and nearby districts of Paro, Punakha, whom are dressed in their best attire to witness the unique spectacle that is - the famed masked dances, and other colourful and exciting displays of traditional culture performed on this very special day.
Overnight: Thimphu  |  Breakfast, Lunch, Dinner

Thimphu is the political, social and spiritual heart of the nation and although this is Bhutan's most modern city, it has retained the unique character of a Bhutanese town. Today we discover the city's sites with visits to, the Memorial Chorten - a beautiful stupa built in the memory of Bhutan’s third King, Kuenselphodrang (Buddha point) - to see the world's biggest Buddha Dordenma statue and enjoy the views of Thimphu Valley, a handmade paper factory where the age old tradition of paper making is still followed.
Overnight: Thimphu  |  Breakfast, Lunch, Dinner

Thimphu - Paro. Today we drive to Paro with sightseeing en route. We'll stop at Chuzom, the confluence of Paro (Pachu) and Thimphu (Wangchu) rivers which provides incredible views of three different types of Stupas – Bhutanese, Tibetan and Nepalese. We continue, to Tachogang Iron chain bridge and Lhakhang (Temple) which was built by Thangthong Gyalpo in the fifteenth century. The temple was likely constructed in 1420. While the Tibetan master was meditating here, he had a vision of an emanation of Avalokiteshvara and decided to build a temple, as well as an iron suspension bridge at this location. A new temple at Tachogang was built in the seventeenth century by the Fourth Druk Desi (local leader) Tenzin Rabgye as the original was destroyed after it served as the main seat for the Five Groups of Lamas, a coalition of local leaders who had opposed Zhabdrung Ngawang Namgyel (a Buddhist teacher who unified Bhutan).

Arriving into Paro we visit the National Museum, housed within the old watch tower Ta Dzong and perched on of a hilltop, overlooking the city. We continue to the famed Rinphung Dzong, the backdrop for the Hollywood film, Little Buddha. After lunch, we tour Kichu Lhakhang - one of the oldest temples in the Kingdom built in the 7th century, and lastly Dungtse Lhakhang Temple.
Overnight: Paro  |  Breakfast, Lunch, Dinner

Tiger’s Nest Monastery, officially Taktshang Pelphung Monastery is regarded as one of the most venerated and famous of Bhutan’s monasteries. It is located on the face of a sheer 900m cliff above the floor of Paro Valley. Today, we embark on a scenic hike (approx. 4 -6 hours) to view this spectacular and unmissable sight. The monastery is only accessible by foot (you can ride a pony part of the way, but this must be arranged in advance by your guide). Once inside the Monastery, there are a temples to see and the monks that reside. After exploring the monastery we retrace our steps and return to Paro.

This evening we enjoy a traditional Bhutanese dinner at a farm house, giving you the opportunity to interact with a local family and learn about the local cuisine of Bhutan.
Overnight: Paro  |  Breakfast, Lunch, Dinner

Thursday 28 September 2023. Today, our holiday sadly concludes after breakfast. Bidding farewell to your fellow travellers, a departure transfer will take you to Paro airport to meet your onward flight
Breakfast 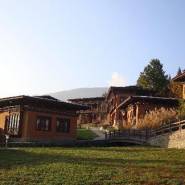 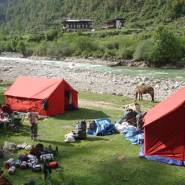 A short drive from Punakha, the Mo Chu River Premium Camp sit on the banks of the River Mo Chu. Our accommodation tonight is set up 8 kilometres from the centre of Punakha on the banks of the Mo Chu River. We camp in two man walk in tents (twin/double sharing), which include thick mattresses, all bedding and towels. A toilet tent is built for the evenings stay, as is a shower tent (with hot water!) and there is also the option to try out a traditional hot stone bath. There is a central area with space to relax around a camp fire and the cook team will create traditional Bhutanese meals which will be served in the dining tent. 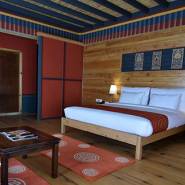 Boasting an idyllic location on the banks of the Wang Chu River, Ramada Valley Thimphu is the perfect base for exploring Thimphu. Each spacious guestroom is tastefully decorated with elements of the local culture and features free WiFi and other modern amenities alongside large windows offering stunning views of the surrounding landscape. The guestrooms are complemented by a range of facilities including a spa and sauna, fitness centre, bar and riverside restaurant. Dine indoors or al fresco and enjoy a range of local Bhutanese and international dishes. 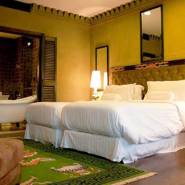 Hotel Druk offers a convenient location on a street lined with tempting eateries just three kilometres from Tashichho Dzong monastery. Its guestrooms have been recently renovated and offer stunning views of the Wang Chu River and the city beyond. Each room is also fully equipped with modern amenities including free WiFi and guests can enjoy use of the hotel’s spa, gym and fitness room. The restaurant offers a fine-dining experience, with a range of authentic and tasty Bhutanese, Asian and continental dishes to choose from.

Experience the mysterious and untouched Himalayan kingdom of Bhutan with our brand new escorted group tours. See the best of Bhutan with an English-speaking guide and staying in 3-4 star hotels with daily meals. 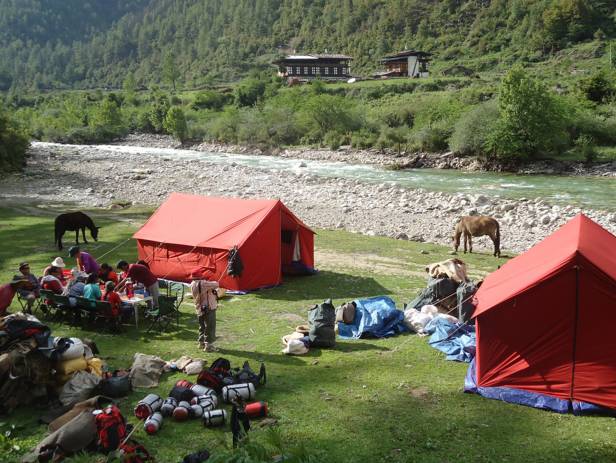 Camping by the Mo Chu River | On The Go Tours 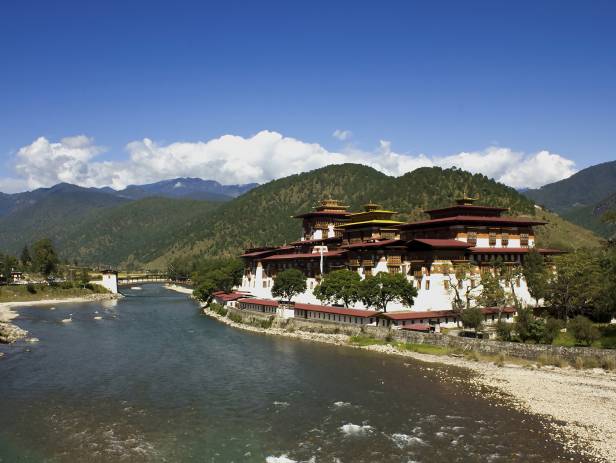 Punakha Dzong and the Mo Chhu river in Punakha | Bhutan 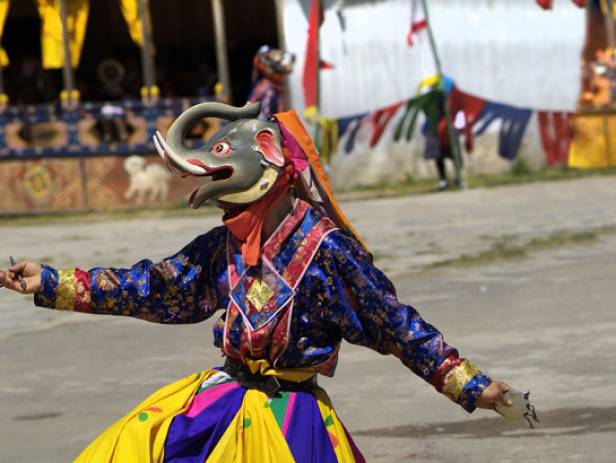 Visit Bhutan during a Tshechu for colourful processions and masked dances 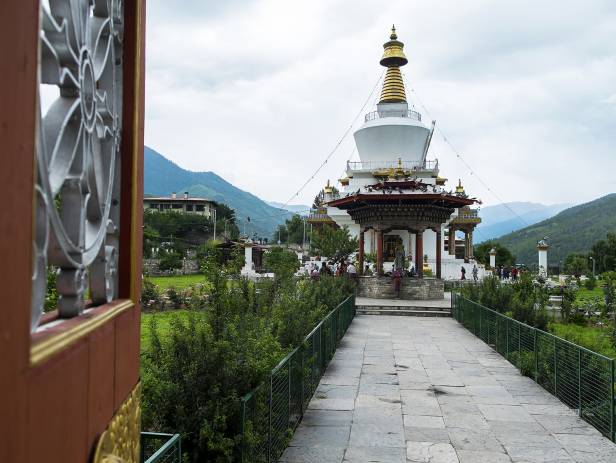 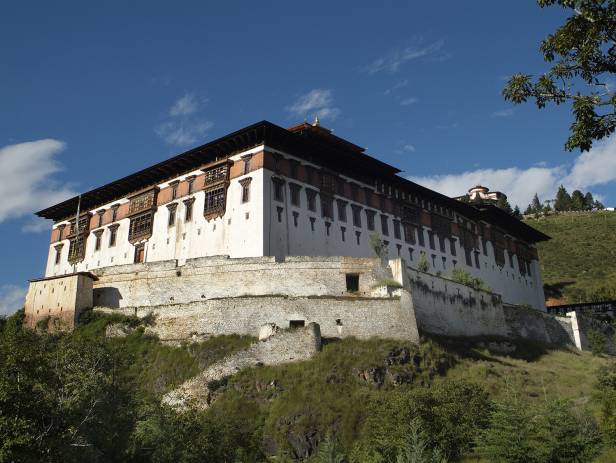 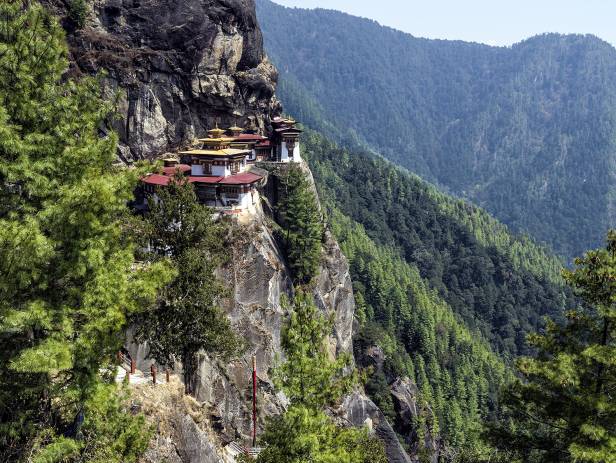