PRIVATE TOUR: Explore the colonial capital city of Phnom Penh, visit the floating villages of Lake Tonle Sap, explore the incredible temples of the Angkor Complex and more, on this extensive 8 day private tour of Cambodia, which also includes the lesser visited temples of Kompong Thom.

Welcome to Cambodia! Upon arrival, you will be met by your tour guide and driver before being transferred to your hotel. The remainder of today is at your leisure to explore independently.
Overnight: Phnom Penh

This morning we embark on a cyclo ride through the bustling streets taking in Central Market, riverside and the Independence Monument. We’ll also see the famous Royal Palace which was built in 1866 and the incredible solid silver-floored Silver Pagoda - famous for its lavish decorations, silver paved floor and Buddha statues made from precious metals and stones, before bidding farewell to our cyclo drivers.

Continuing we visit the National Museum, a treasure chest of Angkorian and pre-Angkorian artifacts before ending our city tour with a visit to Wat Phnom pagoda and shopping at the Russian market. Then enjoy a scenic, sunset boat cruise on the Mekong River..

Please note: The Royal Palace and Silver Pagoda are currently closed and the date they will reopen remains uncertain.
Overnight: Phnom Penh  |  Breakfast

After breakfast we leave Phnom Penh and travel to Kompong Thom province. The province is large in size with some 13,814 km making it the second biggest province of Cambodia. It is one of the most popular historical and cultural sites to explore due to its pre Angkorian temples. Later visit Sambor Prei Kuk, the most impressive group of pre-Angkorian monuments in Cambodia.
Overnight: Kompong Thom  |  Breakfast

Terrace of the Elephants

Today is spent further exploring the Angkor Complex, entering the South Gate of Angkor Thom Temple marvel at the wonders of the eerie Bayon, the terrace of Elephants and the terrace of the Leper King. Afterwards, we continue to visit Ta Prohm temple, shrouded in jungle and left just it was founded by French explorers in 1850s.

This afternoon we set out for a cruise on the beautiful Tonle Sap Lake passing a typical floating village observing the locals in their daily life. Tonight, offers free time or you could opt to see the circus which offers performances daily at 7:30pm.
Overnight: Siem Reap  |  Breakfast

Today we continue to Siem Reap where we will visit the Angkor Wat Temple. This architectural master piece was built in the 12th century, took 30 years to complete and represents the Khmer civilization at its grandest. Covering 81 hectares, it is one of the largest religious monuments ever built. Angkor Wat, the biggest Hindu temple in the world and one of the largest religious monuments in the world, was built between the 9th – 13th century. In the early evening climb to Bakheng Hill to enjoy the superb view as the sun sets over Angkor Wat.
Overnight: Siem Reap  |  Breakfast

Today travel to Banteay Srey, one of the most unusual temples of Angkor, Cambodia. It lies 20 km due north of the main group of temples and is built largely of red sandstone, which is covered with elaborate and intricate carvings. We then join the support efforts for the Cambodian reforestation and plant a tree in Preah Dak Village. We maybe planting a jackfruit or mango tree, which will help carbon offsetting and directly benefit the local community.

Later, the Srah Srang a royal bathing Palace, located east of Banteay Kdei is our next destination. It was constructed in the mid-10th century, and modified in the 12th or 13th century, then visit the Banteay Kdei Temple, a massive Buddhist monastery from the latter part of the 12th century and is surrounded by for concentric walls. Later take in Ta Keo, an incomplete temple in the Khleang style built as the state temple of Jayavarman V. Finally we finish with Thommanon Temple, one of a pair of Hindu temples built in the end of the 11th century.
Overnight: Siem Reap  |  Breakfast

Spend a day at leisure in Siem Reap, relaxing by the pool, taking a stroll around town or souvenir shopping at the local market.

Alternatively take an optional excursion to visit Beng Mealea Temple, a spectacular jungle temple around 60 Kms drive to the north east of Siem Reap. It is one of the "new" highlights of Cambodia; having only been cleared of mines at the end of 2003. Built by Jayarvaman VII; in the style of Angkor Wat; its scale is huge. Being well over one square kilometer in area and all located within a moat. Approached by four causeways, Beng Mealea appears to be a huge pile of rubble partially hidden in the trees, it's not until you get closer to the high walls that the ancient Khmer Architecture reveals itself. Cloaked in vegetation the temple looks as it did when French explorers first stumbled across it.
Overnight: Siem Reap  |  Breakfast

Arrangements conclude after breakfast and onward departure transfer to the airport.
Breakfast 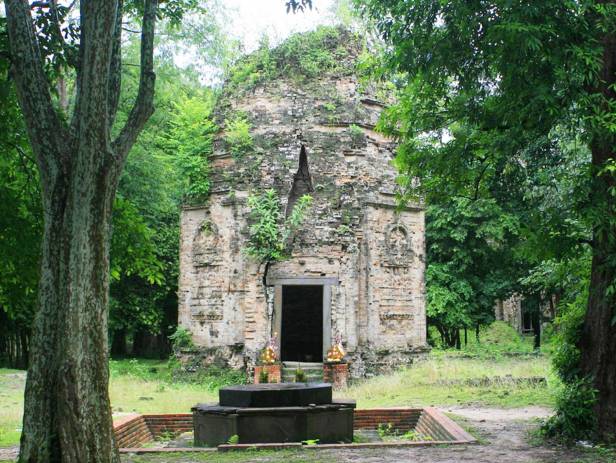