PRIVATE TOUR: Stopping over in Cairo? Why not extend your stay and explore the city of a thousand minarets for a stopover with a difference. Spend two nights in Egypt’s capital exploring the famous Pyramids of Giza and the iconic Sphinx, encountering royal mummies and touring the Grand Egyptian Museum.

Marvel at the legendary Pyramids of Giza and the iconic Sphinx on the Giza Plateau
See the mummies of ancient Egyptian kings and queens at the National Museum of Egyptian Civilization
Explore the Grand Egyptian Museum, home to the treasures of the great Pharaohs including the famed 9kg solid Golden Mask of King Tutankhamun

Breakfast daily
Guided tour of the Pyramids and Sphinx at Giza
Guided sightseeing on day 2 conducted by an English speaking Egyptian tour guide, qualified in Egyptology
All relevant transfers and transportation in private air-conditioned vehicles
2 nights SUPERIOR hotel. STANDARD and DELUXE hotel options are also available upon request. Accommodation rating – See Trip Notes for details
Guided tour of the Grand Egyptian Museum and the Royal Mummies' Hall at the National Museum of Egyptian Civilization
An airport arrival transfer on day 1 and a departure transfer on day 3

International flights and visa
Entrance Fees: USD$60-70pp, paid in local currency
Tipping. We recommend you allow USD$20 per traveller per day of guiding for your guide, and an additional USD$10 per traveller per day for general tipping such as drivers, and bellmen, though ultimately tipping is an entirely personal gesture.

Welcome to Egypt and the start of your city stay! Arrive Cairo and included transfer to your hotel. The remainder of the day is at leisure. If your flight arrives early and you would like to pre-book touring arrangements, please enquire with your consultant.
Overnight: Cairo

After breakfast head out with your guide to the famous Pyramids of Giza and the iconic Sphinx. These ancient wonders are the sole survivors from the ancient Greek-listed Seven Wonders of the World and it is said that the pyramids are the planet’s oldest tourist attraction! Marvel at Cheops (Khufu) - the Great Pyramid which was constructed from over 2.5 million limestone blocks and is thought to have taken more than 20 years to construct. Whilst exploring Giza, you can opt to go inside one of the pyramids, subject to being open. Not built for the purpose of accommodating curious travellers, a visit inside one of the pyramids is hot, humid and not recommended for those that are claustrophobic – but you do feel a bit like Indiana Jones! For a real Arabian experience, why not hire a camel for a trot across the sands of Giza past one of the most famous backdrops in the world – great photo opportunities.

After time for lunch and a little respite, embark upon a guided tour of the Grand Egyptian Museum. In addition to witnessing the priceless funerary treasures of King Tutankhamen, including his legendary solid gold death mask, the museum boasts an astounding array of ancient Egyptian artefacts gathered from across Egypt and the world. Final stop of the day is the National Museum of Egyptian Civilization where you can see the remarkably well preserved mummies of ancient Egyptian kings and queens on display in the Royal Mummies' Hall. Once you’ve had your fill of ancient Egypt return to your hotel for an evening at leisure. Consider heading out to dinner at one of the restaurants that offer fantastic views of Cairo and the Nile. Ask your guide for some recommendations!

Please Note: the Grand Egyptian Museum is set to open late 2023. An official date has yet to be released. If travelling prior to the opening of the new facility we'll visit the Egyptian Museum instead.
Overnight: Cairo  |  Breakfast

Today marks the conclusion of our arrangement. Enjoy breakfast at leisure before hotel check out and included onward departure transfer to the airport. If your flight doesn’t depart until later today and you would like us to pre arrange further sightseeing, please enquire with your consultant.

For information about visas, top travel tips and much more, take a look through our travel guide.
Breakfast

You can on our 5 star Pyramid City break.
Enjoy a luxury city stay in a city that never ceases to amaze. Sleeping by the foot of the Giza Pyramids in the deluxe 5 star Le Meridien Pyramids. Enjoy a fabulous long weekend with the main sights included and free time to explore this ancient city your own way. 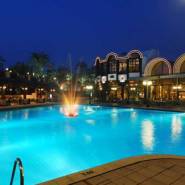 Just a stone's throw from the Pyramids, the Oasis Hotel is a classic Egyptian hotel with beautiful expansive gardens. Rooms are very spacious with comfortable beds and fantastic en suite facilities. Wi-Fi is available and the buffet breakfast offers a good spread. In the evening the outdoor pool and fountains are lit up making the restaurant and bar the perfect place to spend an evening sipping on a cold glass of beer.

My husband, son and his wife and myself were very pleased with the service we had with your tour company. Amir our tour guide was very helpful and very pleasant to be with. I would highly recommend him. We could not have wished for better service both by him and the driver. Thank you for such a great tour of your country Egypt. ”

Visit ancient Egypt's most impressive sights with our perfectly crafted short stays that include airport transfers, accommodation, daily breakfast and a day of guided sightseeing in one neat package.

Marvel at the famed Pyramids of Giza and come face-to-face with the bejewelled death mask of King Tutankhamen at the Egyptian Museum. With our range of three or four day Cairo city stays you can opt for a day at leisure to enjoy Cairo your way and choose to stay at a deluxe hotel located a stone's throw from the Pyramids.