PRIVATE TOUR: Home to the world famous Golden Temple and the seat of the Sikh religion, Amritsar is one of the Punjab’s principal cities. Built in 1803 and made of marble, copper and pure leaf gold, the temple is an amazing architectural feat.

Delhi - Amritsar. Early morning transfer to the railway station to board the Shatabdi Express train to Amritsar (air-conditioned chair car). You will be met upon arrival and transferred to your hotel. Afternoon is at leisure.

Please Note: Before securing your international flights, please contact us so to re-confirm the exact train arrival and departure times for this holiday.
Overnight: Amritsar

Amritsar is one of Punjab’s principal cities and is renowned for it’s world famous Golden Temple, the seat of Sikh religion built by Maharaja Ranjit Singh in 1803. The religion’s adherents don’t cut their hair. The men are easily identified by their turbans, beards and silver bracelets. The women by their salwaar kameez, a dress-and pants combination that has become popular throughout India.

This morning we enjoy a sightseeing tour of historic Amritsar, including the Golden Temple and Jallianwala Bagh. Amritsar’s main attraction - the beautiful Golden Temple, is made of white marble, bronze and gold leaf. To enter the temple itself, you must don a traditional headscarf, wade through a shallow pool (a purification ritual) and merge with the mass of bodies that circle the embankment around the holy structure.

The lower half of the Golden Temple is covered with marble and the upper with copper, overlaid with pure gold leaf, thus the name “The Golden Temple”. The Golden Temple has four entrances and the walls are inlaid with semi-precious stones in floral patterns, frescoes and glasswork.

Situated on the northwestern border of India, the city is also the gateway for travellers on the overland route through Pakistan. The Jallianwala Bagh is a particularly sacred place for all Indians today, as it is associated with a poignant episode in India’s freedom struggle. Besides a thriving industry, Punjab is also known for handicrafts and handlooms. This evening is at your leisure.
Overnight: Amritsar  |  Breakfast

Enjoy a free morning to relax or explore Amritsar independently. This afternoon travel approximately 28km to Wagah, which is the only border crossing between India and Pakistan. Visiting Wagah is an interesting experience especially at sunset when the ‘Retreat’ ceremony takes place with the BSF on the Indian Side of the Border. The changing of the guards and the ceremonial lowering of the flags ceremony is carried out with great pomp.
Overnight: Amritsar  |  Breakfast

Amritsar - Delhi. Free time today to independently explore, shop or simply relax and soak up the atmosphere. This evening we transfer to the railway station to board our train back to Delhi, arriving shortly before midnight. You will be met upon arrival and transferred to your Delhi hotel or to the airport to meet your onward flight. 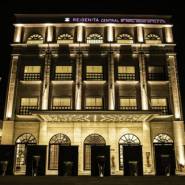 In close proximity to the Golden Temple, the Regenta Central makes an excellent base for travellers looking for a bit of luxury during their time in Amritsar. Each room is pleasantly decorated with creams, browns and gold, making your stay as aesthetically pleasing as possible whilst maintaining a high level of comfort. Guests can dine in the hotel's restaurant, which offers a range of different cuisines, including regional specialities. The hotel is located 14km from the Sri Guru Ram Dass Jee International Airport.