Leh is the capital of Ladakh – a vast highland desert lying between the Karakoram and the Himalayan ranges. Ladakh is characterized by a desolate moonlike landscape and snowy peaks. Leh is inhabited predominantly by the Buddhists and accordingly is the center of Buddhist culture. Enjoy a morning sightseeing tour of the town, dominated by Sengge Namgyal’s nine-story palace, a building in the grand tradition of Tibetan architecture. Above it, on Namgyal Semo the peak overlooking the town, are the ruins of the earliest royal residence at Leh, a fort built by king Tashi Namgyal in the 16th century. In the bazaar, the main sites to visit are the Jo Khang a modern ecumenical Buddhist temple, and an imposing mosque dating from the late 17th century situated opposite each other.
Overnight: Leh & Ladakh  |  Breakfast

Enjoy a full day excursion to Shey, Thiksey and Hemis monasteries. Shey monastery situated on a hilltop is about 15km from Leh and was the summer palace of the royal family of Leh. The monastery houses a two story high-seated image of Buddha cast from copper and covered with gold leaf. Thiksey monastery is situated on a hilltop and the views of the green Indus Valley from its rooftop are splendid. This monastery has a number of chambers full of statues and stupas. Courtyard murals are bright and this imposing structure is in many respects a replica of Potala Palace in Lhasa. Hemis Gompa is the biggest and wealthiest monastery in Ladakh and contains a large number of gold statues, stupas and thangkas, one of which is reputed to be the largest in existence and is exhibited once every 12 years.
Overnight: Leh & Ladakh  |  Breakfast 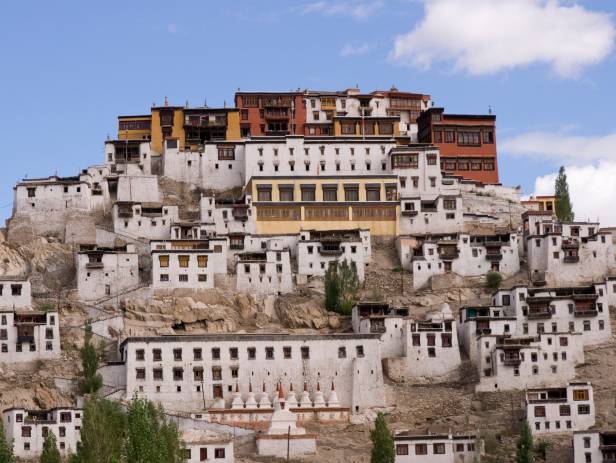