PRIVATE TOUR: See the best of Ho Chi Minh City, aka Saigon, with a 3 day city stay taking in historic sites like the Reunification Palace and colonial landmarks like the Notre Dame Cathedral with plenty of time to shop at the Ben Thanh Market and sample Vietnamese delicacies.

Welcome to Ho Chi Minh City and the south of Vietnam! This bustling metropolis, which is still commonly referred to as Saigon, is jam packed with historic landmarks, busy markets and enticing street stalls making it an excellent city break destination. Arriving into Ho Chi Minh international airport you'll be met by our local representative and transferred to your hotel for check in (from 2pm onwards - early check in available at additional cost). Remainder of the day at leisure.
Overnight: Ho Chi Minh City

Spend the day exploring Ho Chi Minh City accompanied by an English-speaking local guide who will share the history of this compelling city. First up is the Reunification Palace, so named as it was from here that north and south Vietnam were reunited after the Vietnam War. It's now a museum where you can visit the “War Room” from where the South Vietnamese forces were controlled, and most poignantly, the room where the North Vietnamese army took official control in 1975.

Nearby stands the Neo-Romanesque form of the Notre Dame Cathedral, a major centre of Catholicism in modern day Vietnam. Close to here is the wonderful Saigon Central Post Office, built during French colonial rule with a stunning vaulted roof and arched windows. From here proceed to the sprawling Ben Thanh Market, packed to the rafters with all manner of goods from food to clothes with plenty of typically Vietnamese souvenirs including conical hats and lacquer ware.

The day concludes with a stroll around the bustling area of Pho Tay, known as 'Streets of Foreigners' thanks to its popularity with backpackers from around the world. Here you can sample some of Vietnam's delicious snacks and street food from noodle soups to savoury pancakes. Perhaps grab a seat at one of the corner cafes and a cold beverage for a bit of people watching in the city.
Overnight: Ho Chi Minh City  |  Breakfast

Today marks the end of touring arrangements. Make your way to the airport when you are ready.
Breakfast 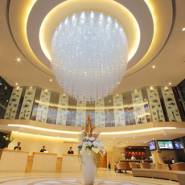 Escape the hustle and bustle at the Edenstar Saigon Hotel in the heart of the city. The comfortable guest rooms are simply furnished with contemporary decor and a neutral palette. Free WiFi is provided. Guests can relax in the massage area or swim in the outdoor pool. Buffet breakfast is served in the hotel's restaurant and an evening beverage can be combined with panoramic views of the city from the hotel's bar.

Discover Vietnam's greatest cities and their nearby attractions with our range of short stays that include accommodation, airport transfers, transportation and guided sightseeing.

Explore charming Hanoi and its colonial remnants, or combine with the natural beauty and incredible vistas of Halong Bay, or head south for the bustling city of Saigon, packed with history and grand architecture, with the option to extend with time spent exploring the scenic Mekong Delta and the local cottage industries.