PRIVATE TOUR: Agra, once the capital of India under the Mughals, a lasting legacy of this time are the superb monuments which date from this era. Perhaps the most famous example is Emperor Shah Jahan’s Taj Mahal, built in loving memory of his beloved wife Mumtaz.

Agra was once India’s Mughal capital. Agra was established in 1475 by Badal Singh and came into its own when Sikander Lodhi of the Lodhi dynasty chose it for his capital because of its proximity to the Yamuna. Babur defeated the Lodhis to capture not only Agra but also to lay the foundation of the Mughal Empire.

We head to Agra Fort for a short visit. Behind its colossal walls are some of the finest Mughal buildings in India. Construction of the fort commenced during the reign of Emperor Akbar and additions continued to be made until the rule of his grandson Shah Jahan. During Akbar’s time, it was primarily a military fort though later the focus shifted and it partially became a palace. After our touring you’ll have time to relax back at the hotel.
Overnight: Agra

Agra. This morning we enjoy a memorable visit to the Taj Mahal at sunrise. Described as the most extravagant monument ever built for love, this fine example of Mughal architecture was built by Emperor Shah Jahan in memory of his beloved second wife-Mumtaz Mahal, who died tragically during childbirth. Built entirely of white marble, construction began in 1631, the year in which Mumtaz died and was not completed until 1653. A staggering total of 20,000 workers contributed their skills in the construction of this unique mausoleum.

After exploring the legendary Taj Mahal, we drive to the deserted city of Fatehpur Sikri. The deserted Mughal city of Fatehpur Sikri was built by Emperor Akbar in 1569 and abandoned after fifteen years due to scarcity of water. The attractions in Fatehpur Sikri are Jama Masjid – a beautiful building containing elements of Persian and Hindu design. The main entrance is through a 54-meter high Buland Darwaza, the Gate of Victory, constructed to commemorate Akbar’s victory in Gujarat.

Please note: The Taj Mahal is closed on Fridays, please book your holiday with this in mind.

Agra - Delhi. Hotel check out and drive to Delhi and transfer to your hotel or the airport to meet your onward flight. 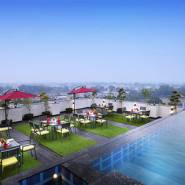 The stylish Royale Regent hotel offers views of the magnificent Taj Mahal from its rooftop pool, so guests can gaze at this World wonder while sipping on a cocktail and retreating from the hustle and bustle of the city. Each comfortable air-conditioned room features a minibar with tea and coffee making facilities, satellite TV as well as excellent en-suite facilities. Guests can also enjoy an array of flavours in the onsite garden or mutli-cuisine restaurant.

Guides and drivers were excellent and most helpful. We had more than one on each day. Hotel was good but small rooms. Second stay was a better room. The staff made it great.”