The African lion has long been on the losing side of an intensifying conflict with people, and if we do not take action now we could soon lose this majestic creature. The African Lion & Environment Research Trust has been working relentlessly to ensure this does not happen and here they give us an update on their work protecting the future of this big cat.

The lioness had been acting strangely over the previous few days. Normally a sociable member of this Zambian pride, she had been keeping a low profile; spending most of her time away from the group. Her behaviour was picked up by the other lions, who were quick to follow her when she was spotted striding purposefully through the long grass and into the thick forest. Faint sounds, which could have been birdcalls, became louder and louder until the lion re-emerged from the bushes. Not birds at all, but cubs; three of them all scrambling after their mother demanding milk.

These lions, although behaving the same as a pride in the wild, are in fact part of the four-stage African Lion Rehabilitation and Release into the Wild Program, located at Antelope Park in Zimbabwe and supported by the African Lion and Environmental Research Trust (ALERT). Their cubs – and others like them – with natural skills and behaviours comparable to any wild-born lion, will eventually be reintroduced into Africa’s national parks and reserves. 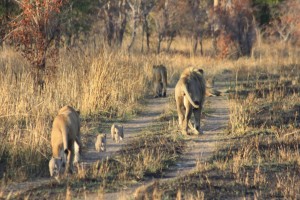 The lions of Africa are facing an alarming decrease in populations, with a loss of 80-90% in less than 40 years. With the three newcomers to the Dambwa pride in Zambia and five second-generation cubs in the Ngamo pride in Zimbabwe, this rehabilitation and release program offers a viable framework for the successful reintroduction of captive-born lions.

To substantiate the release into the wild program and its proposed framework for the ex situ reintroduction of the African lion, ALERT has published two scientific journal articles, written in collaboration with Dr. Jackie Abell of Lancaster University, The first article suggests that lions of captive origin can provide an additional source for reintroduction, recognising that this should be undertaken alongside existing conservation efforts. The second article identifies factors which have contributed to both failed and successful captive-bred species reintroductions in order to learn valuable lessons to offer future attempts.

Ensuring that viable habits exist for future lion populations to thrive is a vital part of ALERT’s work.  To this end, a Memorandum of Understanding has been signed between ALERT and the Republic of Burundi to jointly manage and restore two national parks and three nature reserves to create a sustainable environment for the eventual reintroduction of lions into the country.  ALERT is also in negotiations to carry out similar work in several other African countries. 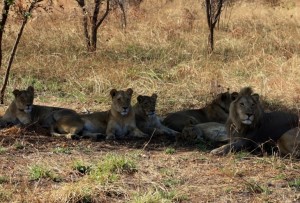 Unless the people of Africa want to conserve lions, the species will continue to decline. ALERT works closely with local communities to ensure that they are able to enjoy tangible benefits from living alongside lions, while empowering them to actively protect and restore their environment for future generations. ALERT is currently working on a project to train rural communities in the manufacture of cook stoves. This will not only cut down on the number of carbon dioxide-related deaths and reduce deforestation; it will also offer a source of income to these impoverished families. A scheme to deter predators from attacking livestock is also being piloted with ALERT’s support to reduce incidents of human and wildlife conflict.

Back at the ALERT project sites, the lions in Stage One of the program continue to thrive. At Antelope Park, the two Ps, Paza and Penya, are shaping up to be formidable hunters, while newcomers the 2Ss, Savuti and Sengwa from the Victoria Falls project, are keen to show what they can do. Three new cubs born to lions in the Antelope Park Breeding Program are now in camp and will shortly begin going out on lion walks to introduce them to the bush. In Livingstone, the eight young S and N cubs are keeping everyone busy – and entertained, while at Victoria Falls, the 2Ts, Thembile and Thuli, are busy honing their skills during lion walks.

Africa needs lions. Without lions Africa will be a continent that has lost its soul. We cannot be the generation that allows this to happen. Join our Pride and show your support for the King of Beasts.