Chichen Itza is an archaeological site in Yucatan and one of the most visited locations in Mexico. Rich in history and the centre of pilgrimage for the ancient Maya civilization for over 1,000 years, Chichen Itza is full of interesting facts. Read on to find out more about this intriguing place. 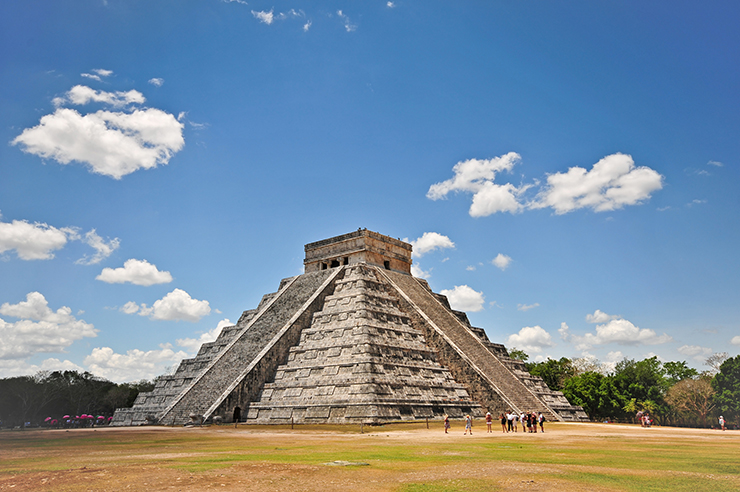 1. Chichen Itza is classified as one of the New Seven Wonders of the World and in 1988 was enlisted as a UNESCO World Heritage Site.

2. The term Chichen Itza means ‘the mouth at the well of Itza’. It is believed Itza means ‘water magicians’, deriving from the Mayan Itz for ‘magic’ and á for ‘water’.

3. El Castillo (the Temple of Kukulkan) is the famous pyramid which dominates the site of Chichen Itza and it actually sits on another much older temple.

4. Believed by archaeologists to have been a powerful economic city around 600 AD, the fall of Chichen Itza is thought to have been approximately 1000 AD.

5. The design and layout of Chichen Itza was clearly well planned and builders constructed temples and pyramids in sets of clusters.

7. During the Spring (20th of March) and Autumn Equinox (22nd September), the sun’s rays create a shadow across the Kukulkan Pyramid that gives the appearance of a serpent slithering down the staircase.

8. Located on the north side of the Kukulkan Pyramid is a platform dedicated to the planet Venus. The Mayans were devoted astronomers and the movements of Venus held special meaning to them, with it influencing the architecture of the ancient Mayan city Uxmal.

9. Although the Kukulkan Pyramid is the most famous and most visited, there are numerous others in Chichen Itza. The Osario is very similar but smaller in size and at the centre is an opening to a natural cave.

10. Many of the sites in Chichen Itza are known for their unusual sounds. If you clap once from one end of the Ball Court, it produces nine echoes in the middle of the court. Additionally, a clap in front of the Kukulkan Pyramid creates an echo resembling the serpent’s chirp.