We all love those powder white sands lapped by crystal clear waters, but there’s also a few beaches out there with a more quirky beauty to them. We’ve searched high and low for the world’s most unusual ones. 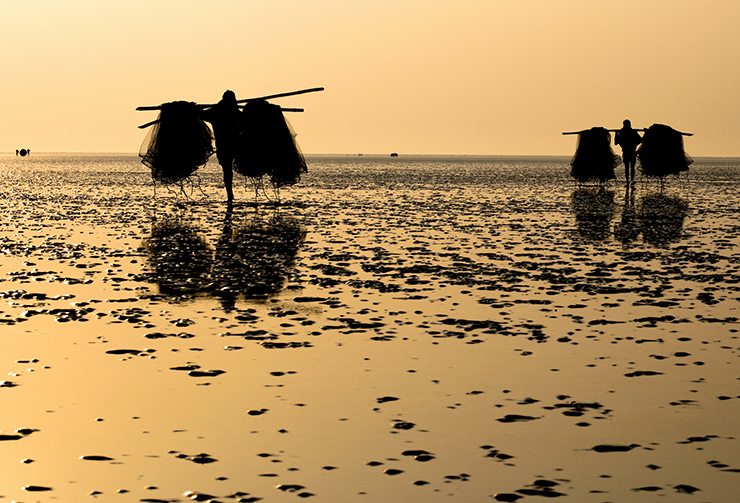 While the best beaches of India are mostly found in Goa, in Odisha you’ll find the incredible Chandipur beach. It’s also known as the ‘vanishing beach’ due to the sea receding 5 km along the seashore. It’s a sight to behold, the water disappearing in front of your eye to leave a peaceful serene landscape.

As the sea fades away it leaves behind all manner of things including shells, driftwood, crabs, and starfish. As people venture over the sea bed, it gives the illusion they are walking on water. Once the sea has retreated local fishermen head out to trawl for the unfortunate fish left behind. 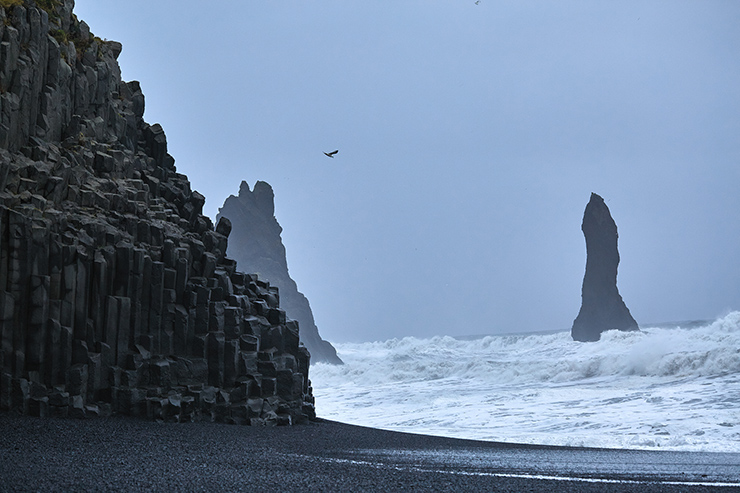 While black beaches are an attribute of volcanic islands, Iceland’s most famous one has to be Reynisfjara beach. It’s is found on the south coast just next to the fishing town of Vik. It’s wild, rugged and majestic, the stormy North Atlantic crashing against the ink-black shore, lined with tall cliffs built of hexagonal-shaped basalt columns. In the sea through the mist, you’ll be able to see three towering black basalt columns called Reynisdrangar. If Icelandic folklore is to be believed, these stacks are trolls who turned to stone when surprised by the rising sun.

Don’t rely on cloudless skies and dazzling sun for this beach to look beautiful. A touch of mist and a slightly overcast sky adds to the spectacular look of this dramatic beach. And of course one of the most magical times to be here is during a winter’s night. The beach is the perfect natural backdrop to watch the Northern Lights. A word of warning – the sea is particularly treacherous with it advised for visitors never to turn their back on the waves. 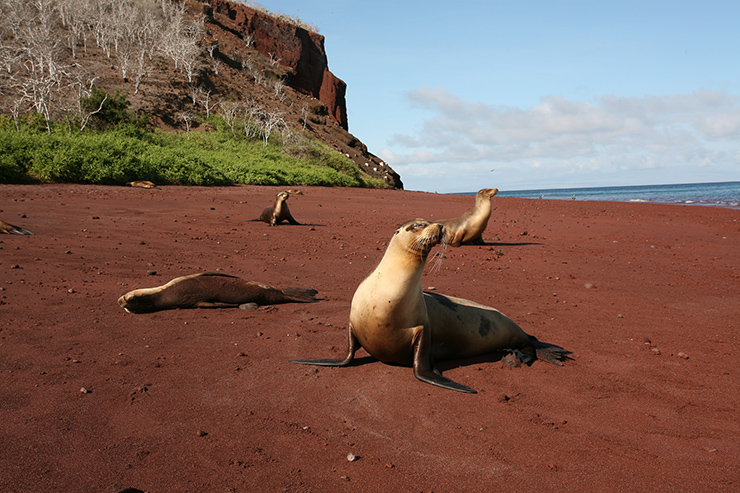 Rábida Island is one of the most volcanically varied islands of the Galapagos archipelago and is mostly made up of spatter cone lava. Over the years this has eroded to show shades of fiery red and maroon brown, the flaming colours due to the high iron content. The sand of the island’s beaches is a striking hue of vermilion, the line of verdant green cactus and bushes behind it contrasting beautifully.

Despite only being a tiny island it’s full of flora and fauna, much of which can be found on the beach. You’ll be met by lounging sea lions, the playful animals taking a break from sunbathing to have a nosy as you arrive. It’s home to some of the rarest birds of the islands, including the Galapagos hawk, with a flamingo lagoon just behind the beach. 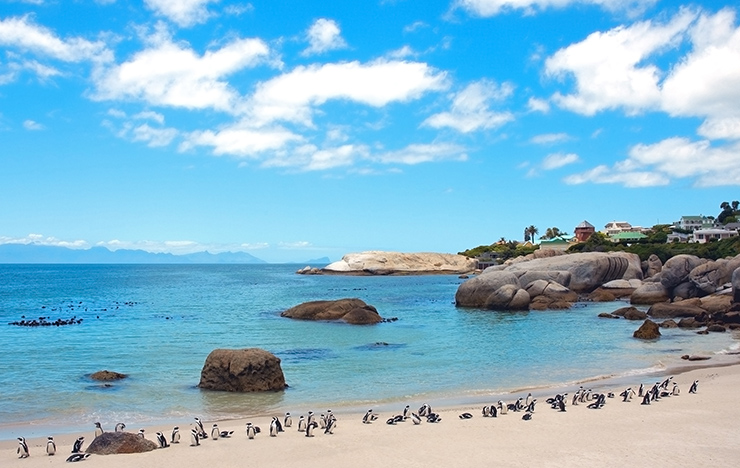 Think of penguins in their natural habitat and you’ll probably envision the proud walk of the Empire penguin across the icy wonderland of Antarctica. It’s unlikely you would think of meeting these charming birds on the shores of South Africa. Nevertheless, this is what is in store for those who head to Boulders Beach, a one-hour drive from the centre of Cape Town.

This beach is the only place you can get close to African penguins and watch as they waddle along the shore. They are nicknamed the ‘jackass’ penguin due to their distinctive mating call, similar to that of a donkey. The ancient boulders along the coastline protect the penguins, and you, from the sea wind and waves making for ideal conditions to watch the penguins paddle in the clear waters of False Bay. 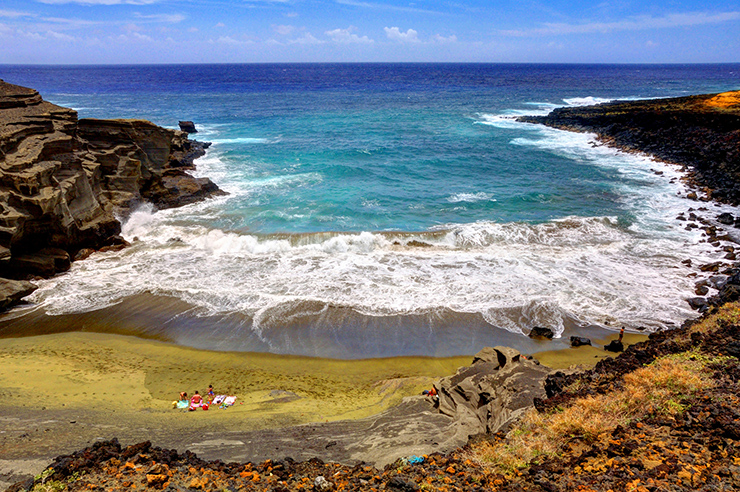 While some associate Hawaii with all-inclusive luxury resorts, tropical drinks served in coconuts and colourful leis, the islands hold so much more to explore. Hawaii is a natural wonderland, the landscapes the perfect playground for any adventurer. For those who want to go in search of something different than Hawaii’s innumerable supply of white-sand beaches, there is Papakolea Beach.

This is the only green sand beach in the United States and only one of four in the world. The beach is found underneath Mauna Loa on the Big Island, the planet’s largest volcano erupting as recently as 1984. These explosions of Mauna Loa brought the bottle green mineral olivine to the surface. This mineral is heavier than the rest of the volcanic material. As the waves drag the rest of the geologic debris out to sea, the beach gets greener and greener. 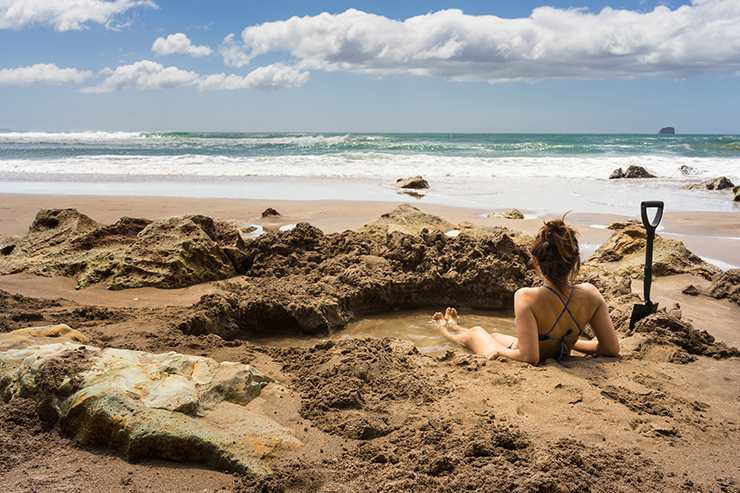 On New Zealand’s north island along the east coast of the Coromandel Peninsula is the Hot Water Beach. Make sure to take your spade, or hire one, to create your own personal spa pool in the sand. Dig not that deep and you’ll come across hot water flowing from the middle of the island to the ocean.

This will be a spa experience with a difference, surrounded by views of the Pohutukawa cliffs. Make sure you time your visit right to experience this natural phenomenon. Two hours on either side of low tide is when the sand with the river running underneath it is uncovered. 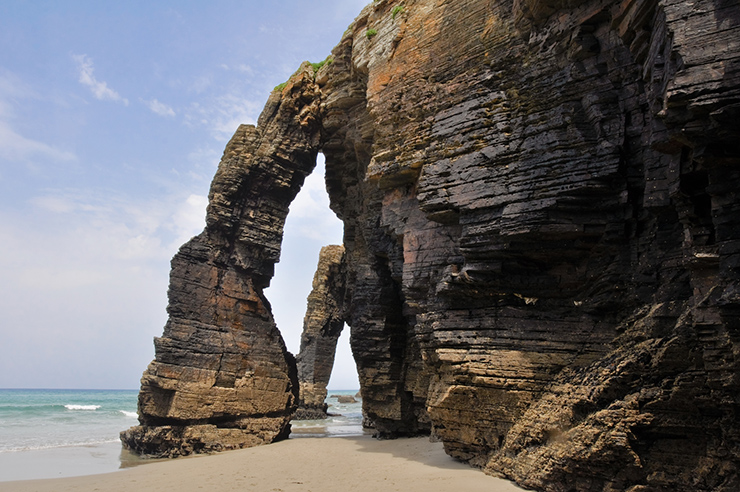 Cathedral Beach is just under a mile along the Galicia coast in Spain, yet it’s packed with a series of unusual geological formations. The natural stone arches resemble those found in Gothic cathedrals. The beach’s official name is Praia de Augas Santas meaning Beach of the Holy Waters. However, it’s easy to see where it gets its nickname of Cathedral Beach from.

Twice a day the retreating sea reveals the collection of arches, cliffs, and sea caves. The natural monument showcases the incredible power of Mother Nature, the beating Atlantic Ocean sculpting the rock into what we see today. Walk between the arches to discover the many caves, crevices, and rock formations, the clear sea water reminiscent of what you would find in the Caribbean. But be aware of the ocean which can quickly return, completely submerging the arches. 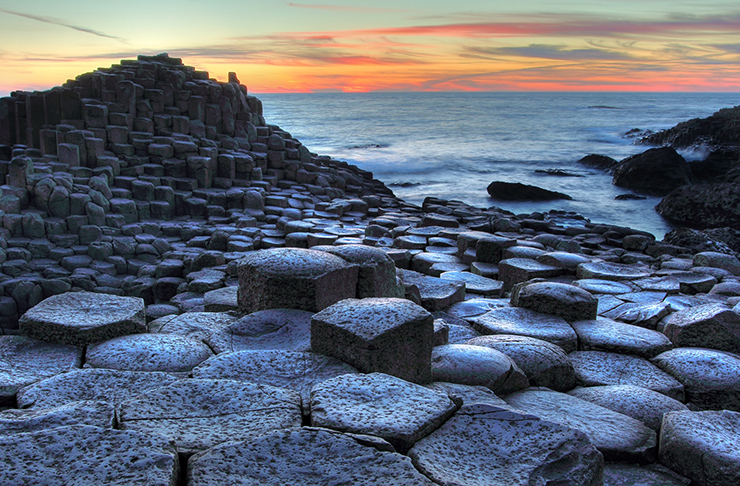 Giant’s Causeway in Ireland is one of the natural wonders in the UK. The 40,000 hexagon black basalt poles rise out of the sea and slot together perfectly like a natural jigsaw puzzle. The columns resemble stepping stones leading from the basalt cliffs into the sea.

This incredible piece of coast has inspired many legends and mythical tales. The most popular story used to explain its bizarre appearance is the one of giants Finn MacCool and Benandonner. In reality, Antrim was subject to intense volcanic activity 60 million years ago. Incredibly hot molten was forced up through fissures in the sea bed to form the lava plateau we see today. 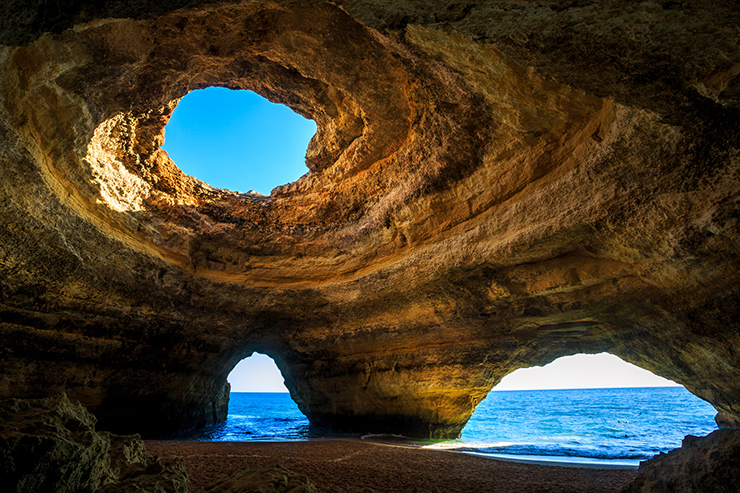 The western Algarve in Portugal has a whole host of alluring beaches. However, the prize for the most magical is taken by the one hidden away in a sea cave in Benagil. The limestone cliff near the small fishing town has been worn away to create the secluded grotto.

It’s slightly hard-to-reach location makes a visit here all the more coveted. You can only get there by sea, either by kayak or renting a small fishing boat. The best time to arrive is in the morning to appreciate the smaller crowds and the golden light pouring through the hole. This hidden beach is not much of a secret anymore. Although if you rise early enough and head over before the hordes do, you’ll feel like one of the first to discover this small piece of paradise. 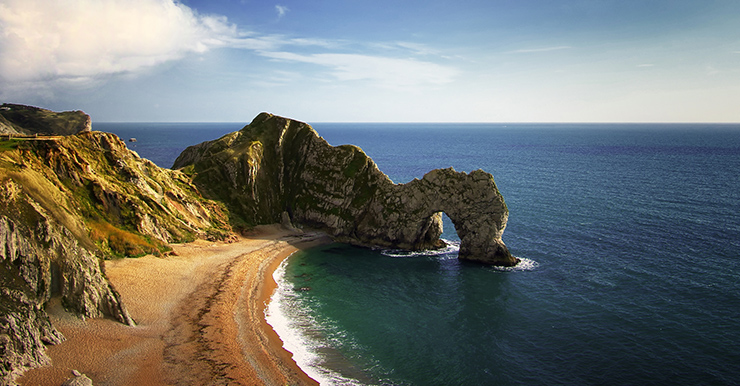 Along the English Channel is the Jurassic Coast stretching for 95 miles from Exmouth to East Devon. The site became England’s first natural World Heritage Site in 2001 due to the rock formations holding fossils dating back to the Triassic, Jurassic, and Cretaceous periods. As well as being a delight for any budding paleontologist, the area is incredibly picturesque.

There are many beaches, coves, and bays along this stretch of coast with Man of War Bay the most iconic due to Durdle Door. The limestone arch separates St Oswald’s Bay and Man of War Bay with a staircase leading you down the cliff. While you would be forgiven for expecting high winds, even in the height of British summer, it’s sheltered from the gale. This beautiful spot is incredibly striking, with it clear why these romantic landscapes have inspired English poets and novelists for years and years.

If you’re interested in a beach break, check out our range of group tours that combine beach and culture.