Home to one of the world’s greatest civilisations, it’s little wonder that Greece boasts superlative ruins and archaeological sites. With 18 World Heritage-listed sites, Greece’s history and culture has long inspired travellers from around the world. And with stunning beaches, delicious cuisine and a Mediterranean climate – this European nation has it all. From temples to treasuries on the mainland and beyond, here are 10 of the most impressive ancient sites in Greece. 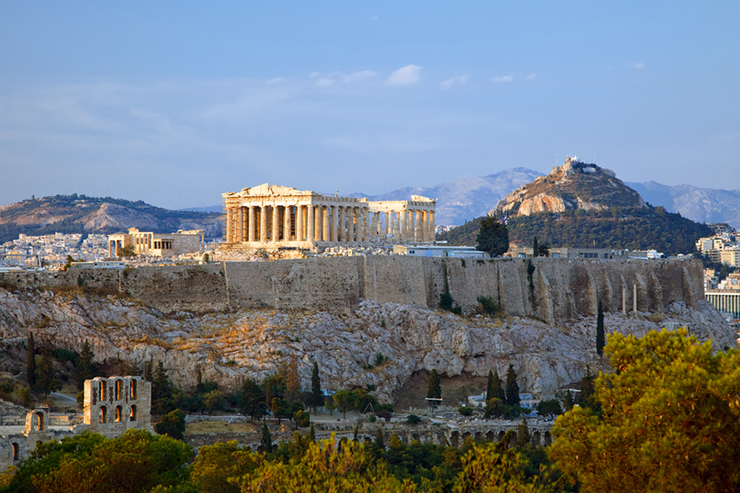 If there’s one monument that symbolises ancient Greece, it’s the Acropolis in Athens. This ancient citadel sits high above the modern capital on a rocky outcrop. Hence the name – ‘acropolis’, which roughly translates as ‘the highest point in the city’. It dates back to the 5th century BC and was the preeminent sanctuary in Athens for many centuries.

Within the site, there are numerous ruins of great historic significance including the Parthenon (a former temple dedicated to the goddess Athena) and the Theatre of Dionysus. The Acropolis is, in fact, the most complete ancient Greek monumental complex still in existence today. And the site deservedly received UNESCO World Heritage status in 1987. If you only visit one of the main ancient sites in Greece, make it this one. But if you are sticking around for a few days in Athens, then have a read of our guide to the best places to visit in the city, after you’ve been to the Acropolis of course! 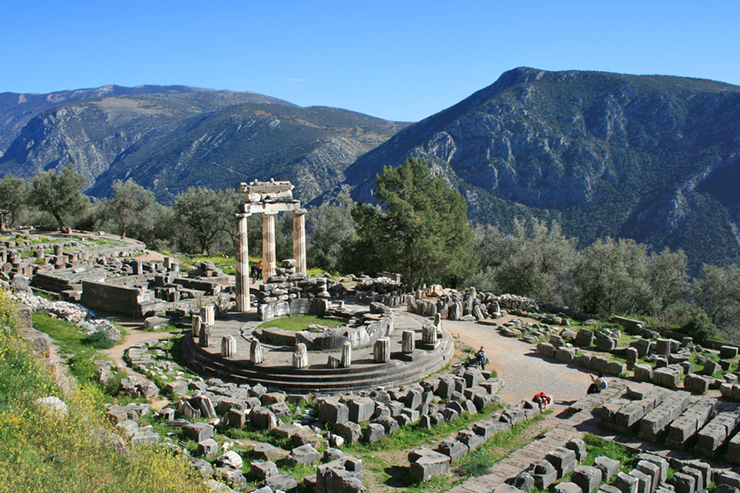 No matter what your interest in archaeology or ancient Greece, we would challenge you not to be awestruck by Delphi. Athens may have been the capital, but Delphi was regarded as the ‘centre of the world’. Undeniably impressive, Delphi is situated between two great rocks on the slopes of Mount Parnassus, overlooking the Gulf of Corinth.

Delphi served as the seat of the famous High Priestess, known as Pythia, who was consulted as an oracle. The area grew rich as all manner of people throughout the ancient world travelled here for cryptic predictions and guidance.

At its heart is the Sanctuary of Apollo – one of the ancient Greeks’ most important gods and son of Zeus. The site also boasts the Sanctuary of Athena and the stadium that held the predecessor of the modern day Olympics – the Pythian Games. Now a UNESCO World Heritage Site, Delphi was the cultural and religious centre of Greece for centuries and the ultimate symbol of unity. 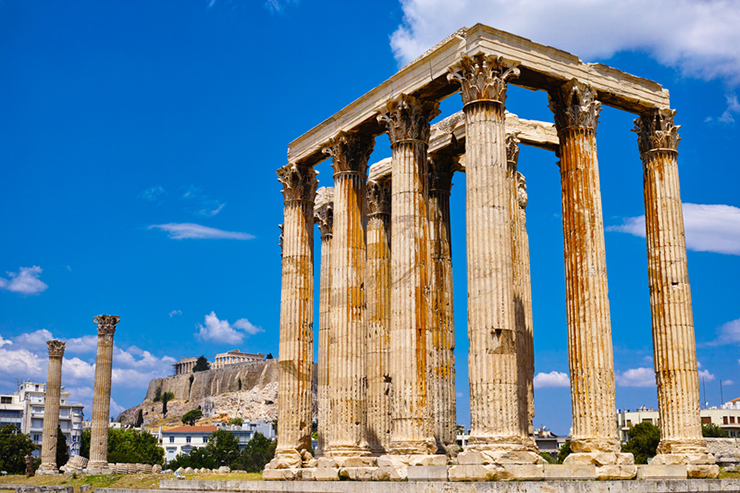 As the birthplace of the Olympic Games, Olympia is certainly one of the most famous ancient sites in Greece. The world’s foremost sports competition, Olympia has had a truly global impact. For over a millennium the games took place here until their abolishment in AD 393 by Emperor Theodosius I. Held to honour Zeus, the games included a series of athletic competitions in which the winners’ only prize was an olive branch. The Olympic flame continues to be lit at the site for the modern Games.

Situated on the Peloponnese peninsula, Olympia’s preservation has suffered during its history. Various earthquakes and its ordered destruction by Theodosius II have attempted to wipe out this magnificent site. However, much of the former glory of this World-Heritage listed sanctuary is still evident today. The Ancient Stadium, the workshop of Phedias, the Palaestra and the temples of Zeus and Hera can all be seen. 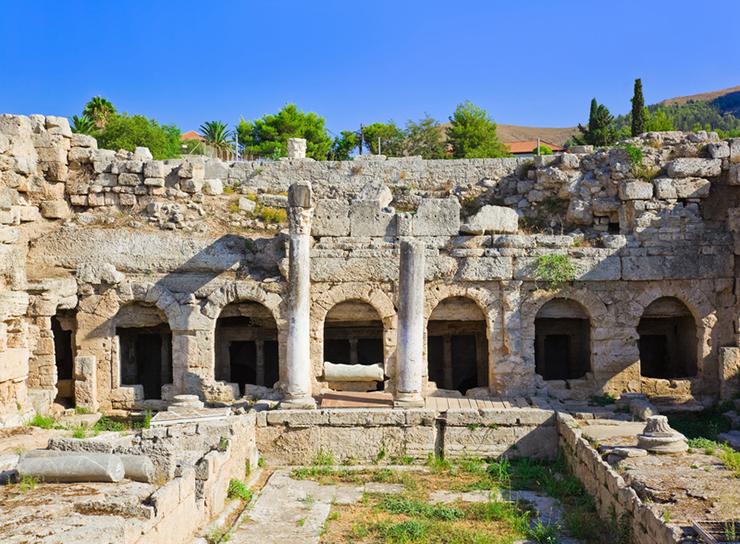 First inhabited in 5000 BC, Corinth’s geographical location meant the city played a major role in Greece’s ancient world. Situated on a narrow strip of land with sea on either side, the Isthmus of Corinth connects the Peloponnese peninsula with mainland Greece. The city was a centre for trade and the base of the country’s naval fleet as well as a participant in many Greek wars.

Corinth is also the setting for many tales from Greek mythology. Jason settled at Corinth after his adventures to find the Golden Fleece and valiant hero Theseus hunted there for the wild boar. The site was first excavated in 1892 and is dominated by the impressive Temple of Apollo, one of the most famous ancient sites in Greece.

Cross the famous Corinth canal and visit the Acrocorinth – the oldest and largest fortress on the peninsula. The ruins at the temple of Aphrodite are definitely worth a visit, as well as exploring the rich botanical garden. 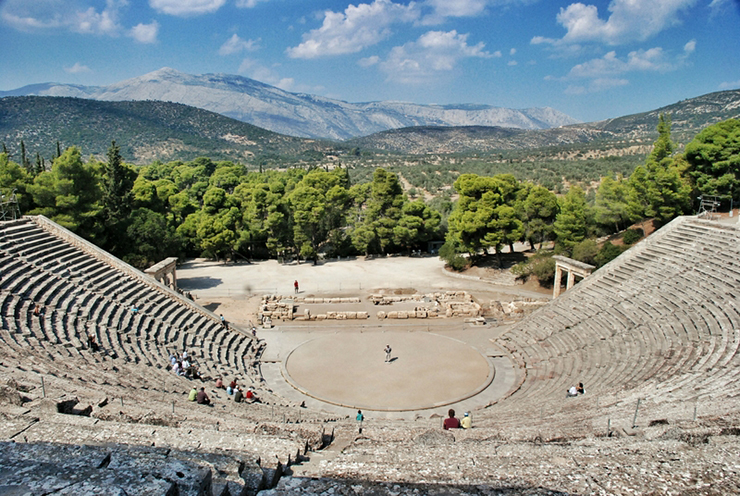 Famous for its Ancient Theatre, Epidaurus has drawn crowds since the theatre’s construction in the late 4th century BC. It was originally built to host ceremonies in honour of the God of medicine, Asclepius. The god’s healing centre is close by. The theatre’s integration into the landscape and flawless design have produced outstanding acoustics. Even 60 metres away in the highest row of seats, any noise can still be perfectly heard.

As one of the best-preserved examples of classic Greek theatre, the famous venue is still in use today. Performances of ancient Greek drama can be booked during the annual Athens and Epidaurus Festival. 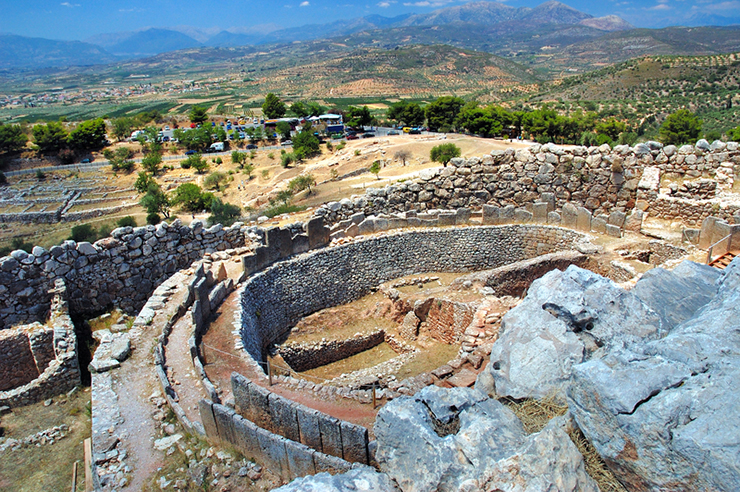 The town behind a civilisation. Mycenae was once a very prosperous settlement that gave its name to the Mycenaean Civilisation. The ancient town was surrounded by gigantic walls, but that didn’t stop Mycenaean culture from spreading across the country and flourishing between 1600 to 100 BC.

Today Mycenae is renowned as one of the most important ancient sites in Greece, and has been World Heritage-listed for the vital role it played in the development of classical Greek culture. The town is indisputably linked to Homer’s epics, the Iliad and The Odyssey, which have influenced European literature and art for over three millennia.

The ruins of Mycenae themselves are inspiring. Walkthrough the famous ‘Lion Gates’ and explore the ancient structures and pathways. Don’t miss the palace or the nearby royal tombs. 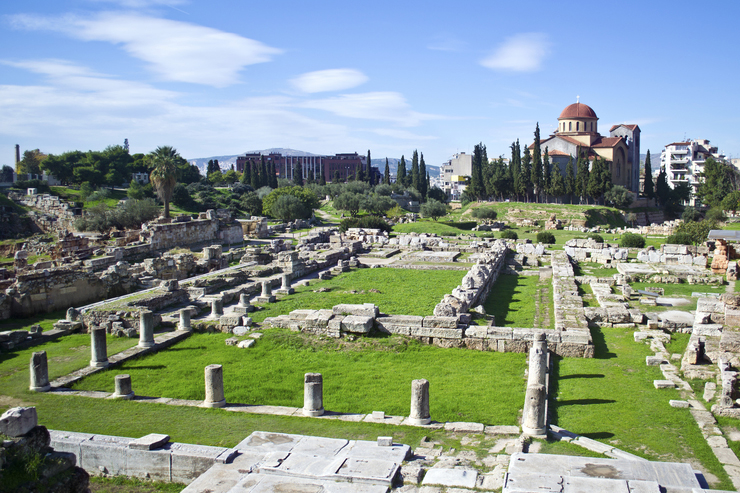 One of the most beautiful, yet least visited ancient sites in Greece is Kerameikos. This ancient cemetery can be found in downtown Athens and was in continuous use from the 9th century BC until Roman times. Derived from the word ‘keramos,’ which translates to pottery in Greek, the area was home to many pottery workshops before it became a cemetery.

As the base for many potters and vase painters, Kerameikos was one of the main producers of the famous Attic vases. Many of these important Athenian vases were found in the cemetery’s tombs. Including the famous ‘Dipylon Oinochoe,’ which bears the oldest known examples of the Greek alphabet.

Explore the ancient remains of the city wall and find the Street of Tombs. Here you can marvel at the imposing monuments and graves of Athens’ wealthiest citizens. 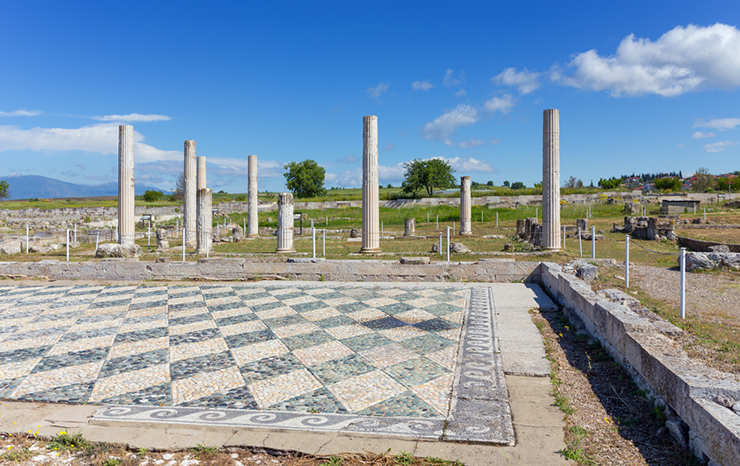 The archaeological site of Pella was once the birthplace of Alexander the Great – the young king who famously set out to conquer the Persian Empire without a single defeat. Interestingly, Pella was also the ancient capital of Macedonia and a bustling metropolis until 148 BC. Thessaloniki then became the new centre of the Roman Macedonian province.

Excavations of the site revealed large homes with amazing mosaic floors. Dating back to the late 4th century BC, these mosaics were formed using small, natural pebbles of many different colours. The pebbles were clearly carefully matched and laid out to create these surface masterpieces. Intricate scenes such as a lion hunt and Dionysus riding a panther have been depicted within the mosaic floors and are worth having your camera for. These mosaics alone ensure that Pella makes our list of the best ancient sites in Greece to visit during your trip. 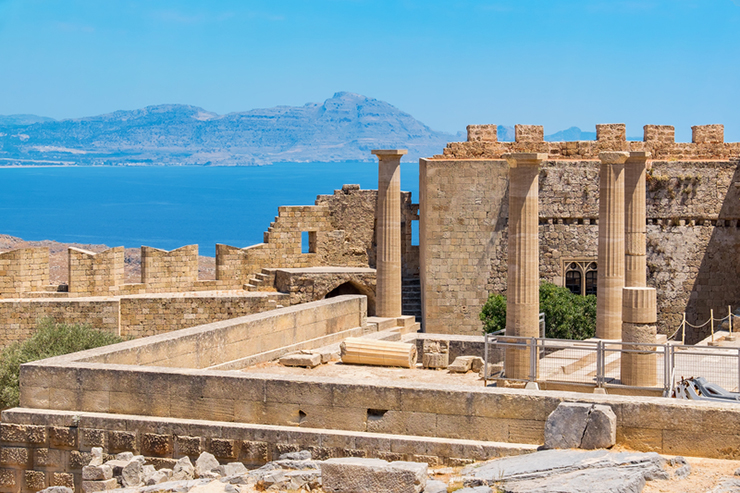 Founded in the 10th century BC, the Acropolis of Lindos was once a major trading centre. This was due to its strategic geographical location between Greece and the Middle East. The archaeological remains found here reveal the wealth of this ancient town. Its inhabitants used to worship Athena, the goddess of wisdom, and the temple where they placed offerings and sacrifices can still be visited today.

Besides the ancient buildings, the view from the Acropolis is breathtaking. Resting 116 metres above sea level, the Acropolis looks out to Lindos and its beach on one side and the bay of St. Paul on the other. According to tradition, this is where Paul the Apostle came ashore in 57 AC. 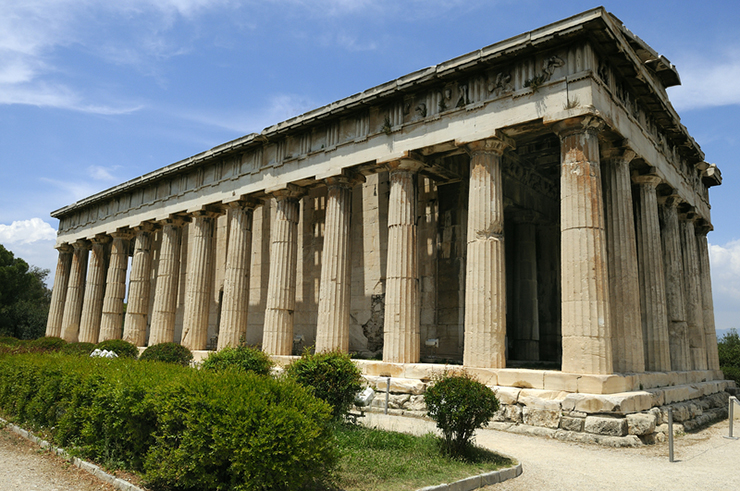 Located beneath the northwest slope of the Acropolis and in the very heart of the city, the Agora of Athens is a must-see for all visitors to Greece’s capital. The term ‘Agora’ is applied to an assembly of people and is often seen as a large, open square where citizens could gather.

Translating in Modern Greek to mean ‘marketplace,’ it is now understood that almost every city in Greece has an Agora. Why visit this one you may ask? The Agora of Athens has been in use for about 5000 years and is the best-known Agora today. Providing an insight into the ancient religious, political, commercial and cultural life of the citizens of Athens, it continues to amaze archaeologists and tourists alike.

You can explore these ancient sites in Greece for yourself with our range of tours to Greece.