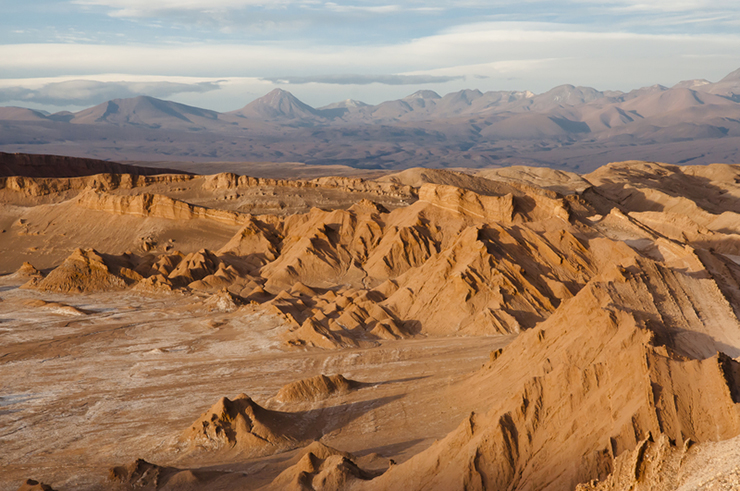 1. The Atacama Desert sits between the Andes and Chilean Coast Range at such a height that prevents moisture reaching it from the Pacific or Atlantic Oceans. It receives less than 1mm of rainfall per year and some parts of the desert have no recorded rainfall at all.

2. Surprisingly, around one million people call the Atacama Desert home. crowding into coastal fishing villages, mining areas and oasis towns. Inhabitants grow dry-weather produce such as olives, tomatoes and cucumbers, and herd alpacas for a living. The desert is also famous for mining copper.

3. Occasionally rainfall does occur and in 2015 the southern part of the Atacama Desert experienced heavy flooding. This sadly caused the deaths of more than 100 people.

4. The northern part of the Atacama Desert contained valuable minerals. Bolivia and Chile attempted to claim the area in the 1800s, causing the War of the Pacific from 1879 to 1884. Chile claimed victory and won control of the region.

5. The Atacama Crossing is an endurance race held in the varied terrain of the desert. It lasts for a period of seven days and features 250 kilometres of challenging upward and downward slopes.

6. The extreme ecosystem of the Atacama makes survival difficult for animals. However, red scorpions, grey foxes, desert wasps and butterflies are among the species able to cope with the dry environment. You can also find penguins, sea lions and pelicans nearer the Pacific side.

7. The Atacama Desert was at the centre of the world’s attention in 2010. Famous for the ‘Copiapo mining accident’, whereby 33 miners survived a record 69 days buried in a 120-year-old copper-gold mine. Thankfully, all 33 miners were safely rescued on 13th October 2010.

8. Often compared to the planet Mars, the Atacama’s landscape and soils are unique. Its appearance is unlike other deserts and several movies and television programmes have been filmed in the area. One of the most famous of which is A Space Odyssey.

9. The Atacama Desert is one of the top three destinations for visitors to Chile. The other top attractions include Easter Island and Chile’s Lake District.

10. Thanks to the high altitude and dry weather, the Atacama is one of the best places in the world for astronomy. It’s the base for two of the top observatories operated by the European Southern Observatory.

Experience the landscape of the Atacama Desert for yourself on our Chile group tours.