The story of Medellin in Colombia is one of a kind. It was once named ‘the most dangerous city on Earth’ by Time magazine some 25 years ago. It was known for gun crime, cocaine and drug lords, being home to possibly the most famous one – Pablo Escobar.

However, after Escobar’s death in 1993 the city started taking back control. One of the great success stories of South America, it now proudly holds the title of the ‘most innovative city in the world’. And it’s a great day out. It’s easy to fall in love with this city, getting swept up by its incredible history. Although if you have a strict travel itinerary, you can enjoy the best of what Medellin has to offer.

And a word to the wise. If you have a love for Narcos and even an appreciation for Escobar, it’s best to not let it known with locals. While the city has changed dramatically, the unfortunate and violent times of the ’80s and ’90s aren’t far behind. The echo of his rule is still very much felt with the locals. It’s very likely you’ll be sharing your admiration with someone whose loved ones where caught up in the awful events. 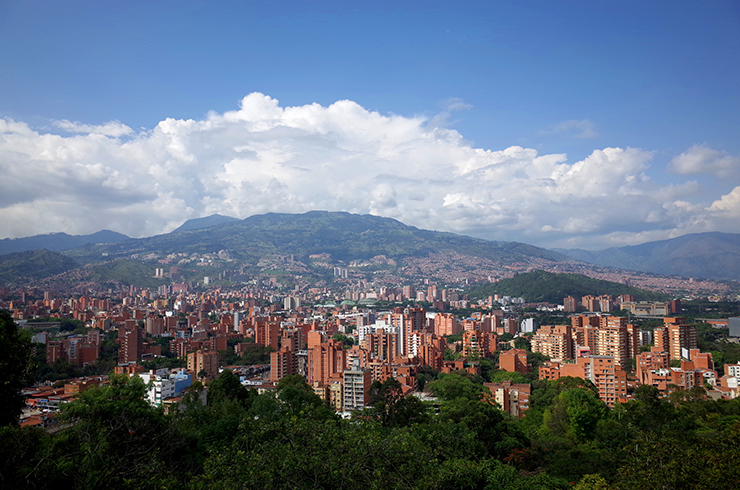 A great introduction to the city, and start to your day, is to head out on a walking tour. The Real City Tours is the city’s number one walking tour. You’ll be led by a local Medellin guide for four hours. Born and raised in the city, the guides are passionate, knowledgeable, friendly, and are praised for their natural story telling skills.

Ask them any questions about the city and you will get an honest genuine answer. They’ll provide thought-provoking insights into the troubles the city has experienced and the positive impact the changes have had.

Meeting at the Poblado Metro Station the tour takes you through Medellin’s downtown area, El Centro formally known as La Candelaria. It has some of the city’s most cultural and historic sights. During the years of Pablo Escobar, it was a difficult place to live. While it’s still not recommended you walk through here at night, it has many hidden gems and interesting stories to enjoy during the day. 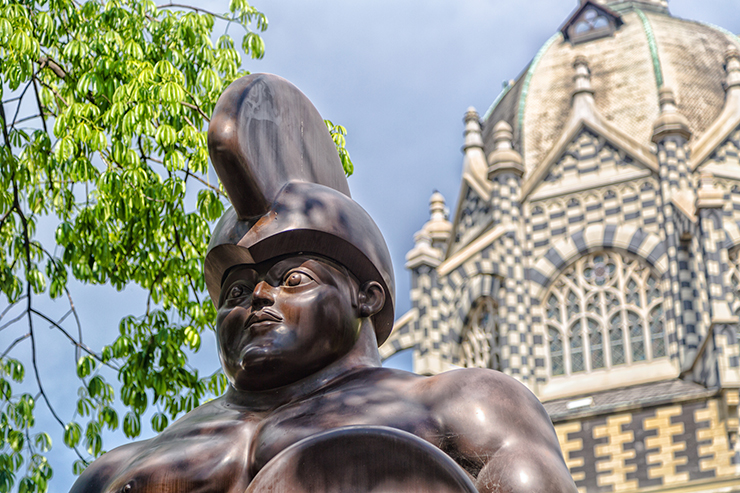 Stops along the way include Botero Square, home to 23 rotund sculptures donated by the Colombian artist Fernando Botero, and Parque Bolivar, an urban park and one of the city’s oldest. You’ll walk down the lively pedestrian street Pasaje Junin, lined with coffee shops and restaurants, and visit Antioquia Train Station, the French Renaissance style railway station a national monument.

As it’s the city’s most popular walking tour, places fill up quickly so make sure you book your spot ahead of time. Tours run in both the morning and afternoon Monday to Friday and Saturday mornings. While the tour is free, tips are suggested. We’re sure you’ll be happy to part with USD $15 after four hours of learning about Medellin.

The tour finishes at San Antonio Metro station, leaving you in prime position to walk 15 minutes down the road to Bonuar for lunch. Just outside the Museum of Modern Art, the food at Bonuar combines the delicious flavours of Brazil, New Orleans and the West Indies.

They serve dishes of flavourful gumbo, jerk chicken, ribs smothered in guayaba BBQ sauce and squid with green papaya. It’s fare that will warm your soul and fill your belly. Named one of the city’s best restaurants, it has a lively atmosphere and stylish interiors which take inspiration from French bistros. 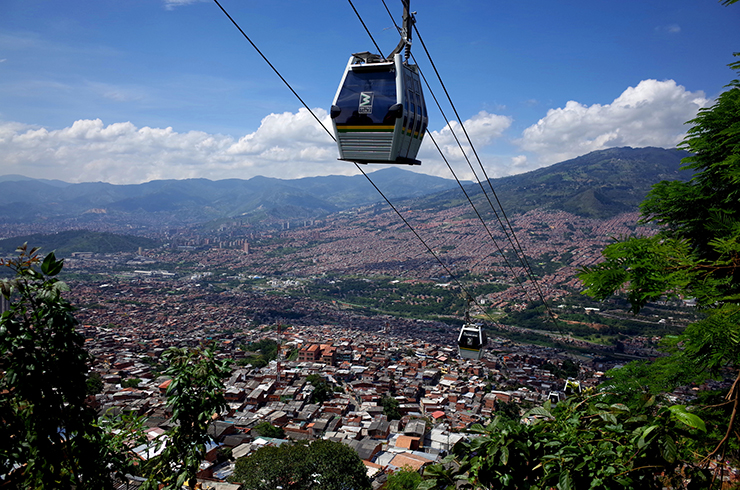 After lunch, it’s time to take to the sky and travel along Medellin’s famous cable car. Viewing the city from above, the buildings sprawled across the valley, you’ll see for yourself the huge scale of Medellin. As well as being a cheap and scenic way to view the city, the cable car system played a very important part in the transformation of Medellin.

Built in the 1990’s, it gave the people who lived in the favelas on the outskirts of the city a way to easily access jobs, education, healthcare and shops in the centre. Without having to spend hours taking the long and dangerous journey down the mountainside. For just 1750 pesos, less than an American dollar, it opened up a whole new city to those who previously felt desperate and unsafe.

From Bonuar walk back to San Antonio station to take the half-hour Metro ride from to Acevedo. Alight here for the first part of the journey. As you climb up over the city, the cityscape beneath you will change. You’ll see the modern buildings change to simple colourful houses with corrugated tin roofs, packed tightly together. These are the favelas. Keep an eye out for the eye-catching graffiti, with all manners of animals artistically painted on the tin roofs. 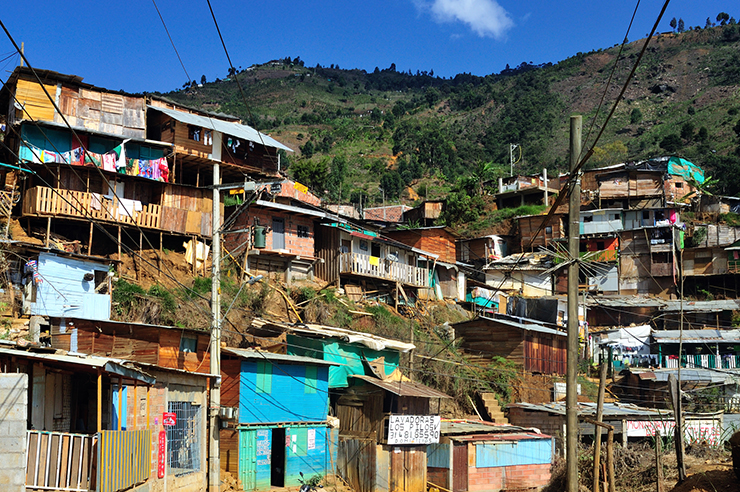 The first stop is Santo Domingo, one of the safer faevlas. While it’s not advised to walk around at night on your own, it is recommended you explore the streets covered in vibrant and imaginative murals. It’s also a great opportunity to try some delicious street food from the vendors selling pasde queso and bunelos. As well as to enjoy and photograph the incredible views over the city.

Time For Some Nature

From here, join the next section of the cable car which will take you outside the valley to Parque Arvi. The scenery beneath you will dramatically change to green forest, the likes of which you would never have imagined would be so close to the urban jungle of Medellin. 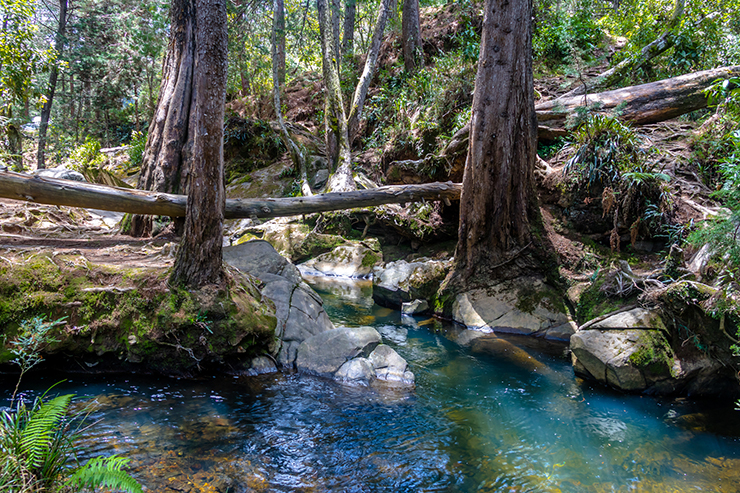 Parque Arvi was created purely for those who enjoy spending time in nature. The 16,000 hectares of verdant park has seven walking paths and 119 different species of birds. Hiking through the national park will take you to the mountain lakes and cloud forest.

It’s time to explore the city’s nightlife. Head back down to the centre of the city in the cable car, keeping an eye out for any missed graffiti animals. Take the Metro from Acevedo station to Poblado station to walk the 20 minutes to Parque Lleras.

The area surrounding Parque Lleras is one of the best places to enjoy Medellin’s atmospheric and buzzing nightlife. Found in the centre of the upscale Poblado neighbourhood, the area is full to the brim with restaurants, bars and clubs. It’s also one of the safer nightlife areas. You’ll feel totally at ease roaming the streets, jumping from one bar to another.

Head to Burdo for dirty burgers, Mexican food and colossal salads served with an extensive gin menu and party vibes. For cocktails and great views of the Poblado skyline, visit SkyBar. And dance the night away in Calle 9 + 1. All before calling it a night on your day in Medellin.

Fancy riding Medellin’s cable car and enjoying the great nightlife? Travel on our Colombia group tours to experience this incredible city for yourself.

One comment on “How to Spend a Day in Medellin”