Dotted around the Central Highlands of Costa Rica you’ll come across several cloud forests – highland forests characterized by almost 100% humidity year-round. The country is a popular destination for this reason, so we have compiled a list of 10 interesting facts about Costa Rica’s cloud forests. 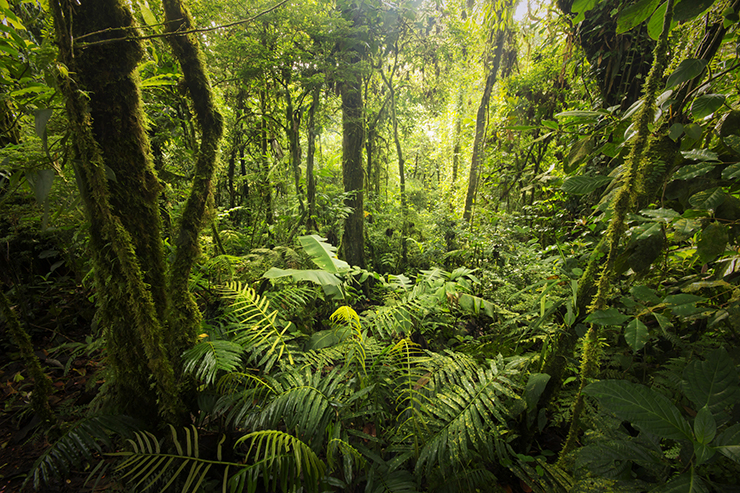 1. There are a number of cloud forests in Costa Rica with the most famous (perhaps in the world) being Monteverde, established in 1973.

2. The Monteverde cloud forest initially covered 328 hectares when it was discovered, and today it’s approximately 10,500 hectares. With help from sponsors, a young graduate student, George Powell, was living in the area and turned what used to be a private reserve into the large forest we see now.

3. Costa Rica sits between the Pacific Ocean and the Caribbean Sea (Atlantic Ocean), which creates what we know as the Great Divide. Visitors to Monteverde can step over the separation, claiming they’re in two continents at one time.

4. National Geographic described the Monteverde Cloud Forest as a ‘jewel in the crown of Cloud Forest Reserves’, and it is the most famous its type.

5. There are roughly 9,000 species of plants in Costa Rica, with approximately 3,000 growing in the Monteverde Forest. The complex eco-system is also home to over 100 mammal species, 400 types of bird and thousands of insect species.

6. There are a number of other popular forests in Costa Rica – Bajos Del Toro Cloud Forest, La Paz Waterfall Gardens and the Los Angeles Cloud Forest being some of the best for exploring and research.

7. The now extinct Golden Toad was another factor attracting visitors to the Monteverde area, they once lived in quantities in the high-altitude region.

8. Monteverde Reserve is famous for being one of the easiest places to observe exotic birds such as toucans, trogons, bellbirds and hummingbirds.

9. The location of Monteverde Cloud Forest means winds are strong and there is a lot of cloud cover on the Caribbean side, whereas the skies are clearer and the winds are calmer on the Pacific side. This is a result of trade winds blowing from the northeast toward the southwest, producing precipitation. Air then evaporates the moisture down the west side of the mountain, reducing cloud cover and creating a dryer environment on the Pacific.

10. Hiking is a popular activity in cloud forests. The highest trails in Monteverde sit at an elevation of 1,250 metres although the altitude of the mountain is 1,800 metres.