After running for more than 80 years, Japan’s famous Tsukiji fish market will be closing down and relocated to its new site in Toyosu. As the world’s largest fish market, Tsukiji was a popular tourist attraction and best known for its pre-dawn tuna auctions.

Starting at 5:30am, these lively auctions were considered a must-see for visitors to Tokyo. However, in anticipation of the move, viewings were closed to the public on 15th September. Whilst the popular outer markets at Tsukiji aren’t closing or relocating, the historic inner market will close on 6th October.

The new Toyosu Market will be opening just five days later on 11th October, approximately 2.3 kilometres east of Tsukiji. Admission will be free of charge, with visitors once again able to see the traders at work. 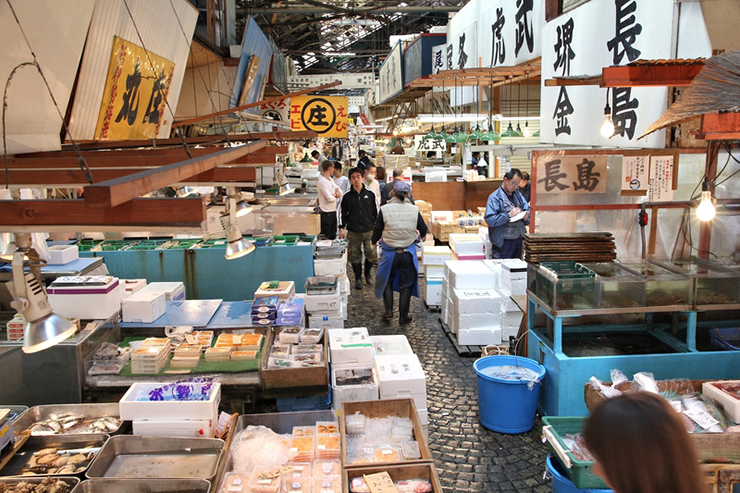 Why is Tsukiji Fish Market moving?

Originally scheduled for late 2016, the move comes after various concerns that Tsukiji fish market was no longer fit for purpose. As the market had gained in popularity, the number of international visitors became too much for the facility. There was also much friction between traders and tourists as they hindered the daily proceedings.

Besides being too small for rising visitor numbers, the market’s age was also a worry. Tsukiji first opened in 1935 and, in a country prone to natural disasters, there were concerns about its earthquake resistance and fire safety. The land that Tsukiji is currently on is also due to be redeveloped for the 2020 Olympics.

Consisting of three main buildings, the new Toyosu Market has been purpose-built with modern infrastructure allowing tourists to visit without hampering the local traders. Two buildings will be dedicated to seafood, with the other selling fruit and vegetables. Each will contain viewing decks where tourists can observe the action from above.

Each building is also connected to Shijo-mae Station and to each other via elevated pedestrian walkways. Many restaurants from Tsukiji’s inner market are also making the move, so visitors can continue enjoying their fresh seafood meals.

Whilst it won’t have the historic charm of Tsukiji, it’s thought Toyosu Market will also become a popular tourist spot. Many local families have been fish traders for generations and the market gives visitors a unique insight into this side of life in Tokyo.

We visit Tokyo and plenty more top destinations in Japan on our group tours, why not take a look?