Angkor Wat is Cambodia’s most popular attraction. The legendary temple complex is the largest religious monument in the world with an incredible history. A captivating site, we’ve pulled together a list of the top ten facts about Angkor Wat. 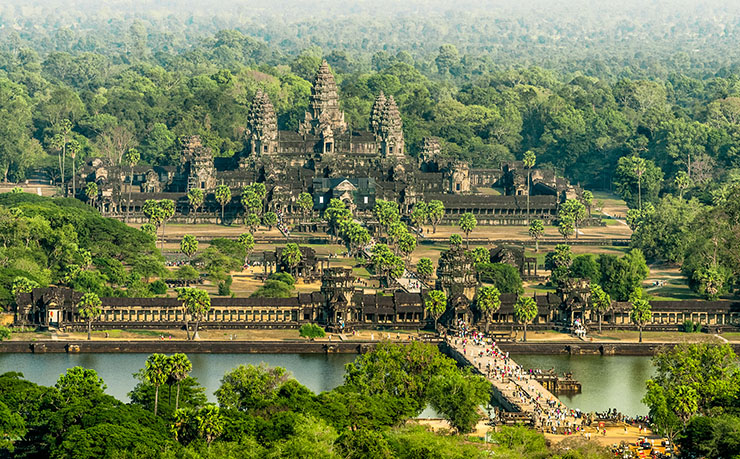 1. Angkor Wat was built without the aid of any machines. The site was constructed between 802 and 1220 AD when machinery wasn’t available. This makes it even more incredible to see for yourself.

2. It took 35 years to build Angkor Wat. Around 1,000 elephants in addition to 300,000 human labourers were helped to build the temple. Five million tons of sandstone were also used to build the religious site, which covers an area of 208 hectares.

3. It attracts two million tourists a year with limits now being put in place on the number of visitors allowed at certain times.

4. Cambodia is incredibly proud of Angkor Wat and an image of it is included on the country’s flag. Cambodia and Afghanistan are the only two countries that display their national monument on their flag. Illustrations of Angkor Wat also appear on denominations of the riel, the Cambodian currency.

Let’s hope they got the shots at first take

6. Paramount Pictures paid $10,000 a day to film in the temple Ta Prohm for the 2001 film ‘‘Lara Croft: Tomb Raider’. It was after filming in Cambodia that Angelina Jolie made the decision to adopt her Cambodian son Maddox.

7. Originally built for the Hindu religion, Angkor Wat became Buddhist in the late 13th century. The temple is still used for worship today.

8. After 1432 the city of Angkor was ‘lost’ for a few centuries. Passing Buddhist monks occasionally stumbled upon the ruins, but no one living remembered or understood its origins. French explorer Henri Mouhot discovered Angkor Wat in 1860. Dying of fever in Laos a year later, people learned about the temples in his writings published posthumously.

A landmark worth saving

9. Angkor Wat went through years of looting and many statues were decapitated for sale to private collectors. It became a UNESCO World Heritage Site in 1992, which encouraged an international effort to prevent further damage.

10. Angkor Wat faces the west. This is unusual when compared to similar temples in the region, which are mostly east-facing. As the west is associated with death it’s believed the site was built for funerals or used as a tomb. Today, the location means it faces towards sunset, a popular time to visit.

Did you enjoy our facts about Angkor Wat? No visit to Cambodia is complete without visiting it. Explore the UNESCO site on one of our Cambodia group tours or one of our multi-country Southeast-Asia tours.