Set within the coastal desert of Namibia are the biggest sand dunes in the world. They attract a vast number of travellers each year, many of whom aim to climb up the sands and enjoy a thrilling slide back down. But how much do you know about them? Here are ten lesser-known facts about the Namib sand dunes.

1. Sossusvlei, in the southern part of the Namib Desert, is a salt and clay ‘pan’ surrounded by sand dunes. Due to its unique red sand, Sossusvlei is a must-see for many people when travelling to Africa.

2. In the Nama language, ‘sossus’ translates as a dead end or place of no return, while in Afrikaans the word ‘vlei’ refers to a shallow lake or marsh. Together, the name Sossusvlei roughly translates to mean a dead end marsh.

3. ‘Big Daddy’ attracts thousands of climbers sitting at a height of 325 metres, but the highest sand dune in the world is the nearby 383 metre-tall Dune 7.

4. The sand of Sossusvlei is approximately five million years old. 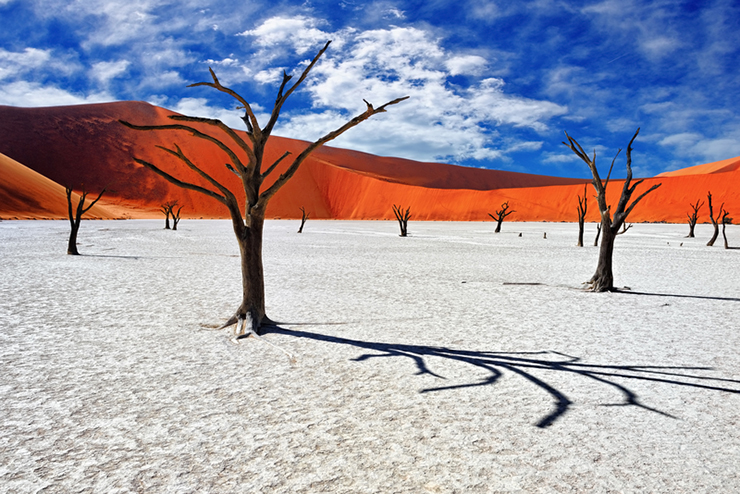 5. The primary source of water to the Namib is fog, meaning reptiles and mammals inhabiting the region have become desert-adapted in order to survive with limited water supplies.

6. A variety of different animal species can be found roaming Sossusvlei, including antelopes, ostriches, rodents and birds.

7. The sand dunes in the Sossusvlei area are known as ‘star dunes’ due to the shape formed when the wind approaches from all directions. As a result, the dunes hardly move.

8. The sand in the region is given its distinctive red colour from the layer of iron oxide which coats it.

9. The colour of the sand changes across the desert. Closer to the sea in the west, the sand appears whiter, whereas moving inland the sand becomes pinker in colour.

10. The remarkable sand dunes are not the only thing to attract visitors – rarely, following an unusually rainy season, the Tsauchab River will flow to the pan and people travel from all over the world to witness it turning into a lake.

Enjoy our facts about the Namib sand dunes? Experience the landscape of Sossusvlei for yourself on our Namibia group tours.