However, the main reason for visiting Zagora is to head into the colossal Sahara desert. It stretches across most of North Africa and is almost the size of the United States. The part that is reached easily from Zagora is the rolling sand dunes, which change color depending on the time of day. Sparse vegetation mainly in the form of a few sprigs of grass are dotted in the massive dunes and every now and again you see the footprints of some of the hardy animals that brave the desert. A night out under the never-ending stars with silence all around is truly unforgettable. 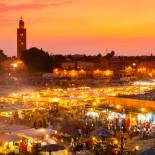