For all of our tour group members, visiting China was on their “list” of places to see – whether because of the country’s beautiful scenery, its bustling cities, delicious cuisine or diverse culture, China has always been somewhere they knew they wanted to visit. A land of dragons and emperors with thousands of years of cultural heritage, it had captured all of our imagination, especially mine. But it would be fair to say, in addition to all of their other reasons for wanting to come here, exploring the Great Wall of China was one of the main drawcards when signing up for this adventure.

With approx. four million visitors a year, this UNESCO-protected landmark is one of the world’s official seven wonders and with its reputation for being the only man-made structure visible from space, who wouldn’t want to explore it for themselves? My group of twelve, made up of guests from Australia, Canada, United Kingdom, New Zealand and South Africa, had all been enthusiastic as we’d explored the other major tourist sites in Beijing, over the past few days. Led by the expertise of our local guide Feng, experiencing the sheer size of the world’s largest public area, Tiananmen Square and the incredible Forbidden Palace, the 9999-roomed home to emperors of the past, was impressive. Sampling the famed Peking duck washed down with locally brewed firewater, barbequed skewers of insects and questionable animal parts considered delicacies locally and dumplings of many varieties both challenged and satisfied our palates. Exploring different parts of the city like a local, on a rickshaw through the ancient alleyways known as hutongs and afterwards, enjoying a near-unbelievable show filled with acrobatic performances, kept us spellbound.

But all of that failed to excite the group like visiting the Great Wall – as we left behind the busy streets of Beijing, the Chinese countryside opened up around us. The smog of the city still lingering, mixed with the fog of the early morning’s start added to the wonder we were all feeling as we neared closer.

The first signs of this massive structure began to appear through the clouds in the form of scattered ramparts that in the distance were still seemingly connected.

Built originally as a protective fortress against enemies during the Qin Dynasty and taking nearly 2000 years to complete, the original wall was said to have been nearly 20,000km long. Now partially in ruins, the Great Wall still stretches east to west approx. 6,700kms in length, across the hills, deserts, mountains and plateaus of northern China. 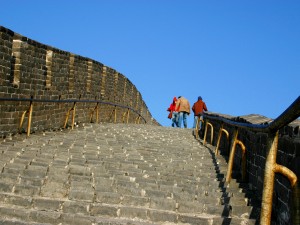 Finally arriving in Badaling, our group all headed off with determination to join the throngs of locals making the most of their summer holidays to experience the Great Wall for themselves. Once through the main gate, the choices were to travel left for an easier walk with fewer tourists, or the alternative right-side access, to hit the steep incline and choose to explore the longer section of wall, as it snaked across the nearby hills. The longer section promised amazing views of the dramatic countryside around us as well as the chance to climb through more of the towers that sectioned the wall, that were originally built as battlements where smoke signals were sent to warn of enemy movements. The opportunity to walk further along this impressive structure and see more of the local landscape made my own decision an easy one.

Our group split up along their preferred path and spent the next several hours exploring the Wall, in their own ways. Some spent their time mixing with locals who were keen to share in the photographic preservation of their visit; some hiked determinedly to the end of this section of the Wall where it eventually disintegrated to ruins; and others spent a combination of both experiences to make up their time on the Wall. Whatever the path taken, when the group came back together in a nearby café some hours later, the elation was palpable as we all shared our own Great Wall tales. 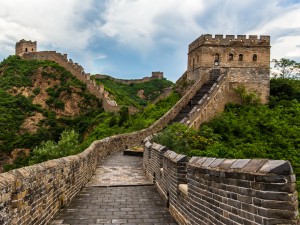 Dreams had certainly come true for the members of our group over the past few hours, which would not be easily forgotten. Whether it be the wonder of just how much manpower went into creating such an incredible structural feat so long ago or whether it was simply the satisfaction of having explored it for ourselves after all these years of longing to do so, the Great Wall of China certainly proved to be very worthy of everyone’s anticipation and elation.

In just over a day, we’d be travelling to experience another man-made Chinese marvel, the Terracotta Warriors of Xian – at the end of this tour, it was hard to know where my most treasured memory of China would lie but what a memorable adventure it had all become.

Keen to know more about exploring the Great Wall of China? Take a look at our Insider Guide here.