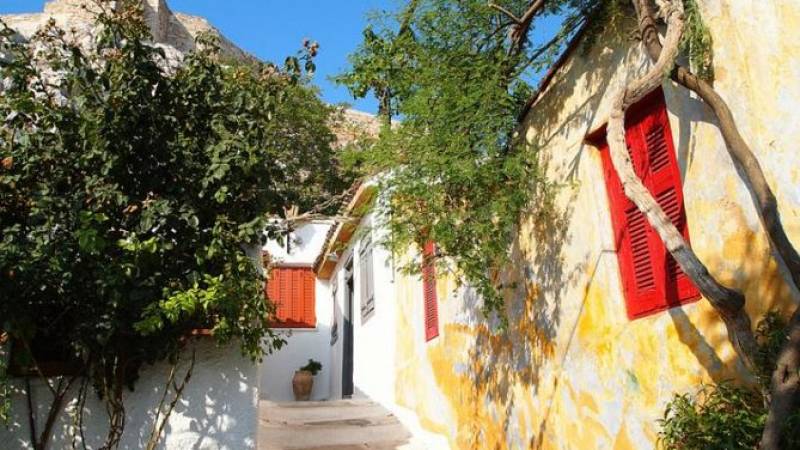 from USD $61.27
Escape the buzz of downtown Athens and head to its peaceful hills for a 3.5-hour leisurely paced walking tour, finishing with a Greek picnic and glass of white wine! Your expert local guide will introduce you to the gentle hills around Athens’ Acropolis, chatting about the area’s ancient history as you go. Discover the charms of Plaka (Athens’ Old Town), Anafiotika with its pretty Greek island-style houses and three of the city’s famous hills: Philopappou and Mars Hill.
BOOK WITH CONFIDENCE: As members of ABTA and ATAS we are 100% financially bonded. You can book your day trip with us in absolute confidence, no matter where in the world you are.

The Acropolis of Athens is an ancient citadel located on a rocky outcrop above the city of Athens and contains the remains of several ancient buildings of great architectural and historic significance, the most famous being the Parthenon. The word acropolis is from the Greek words ἄκρον and πόλις

The Benaki Museum, established and endowed in 1930 by Antonis Benakis in memory of his father Emmanuel Benakis, is housed in the Benakis family mansion in downtown Athens, Greece

In the shadow of the Acropolis and its ancient temples, hillside Plaka has a village feel, with narrow cobblestone streets lined with tiny shops selling jewelry, clothes and local ceramics. Sidewalk cafes and family-run tavernas stay open until late, and Cine Paris shows classic movies al fresco. Nearby, the whitewashed homes of the Anafiotika neighborhood give the small enclave a Greek-island vibe

Tripodon street is considered as the oldest street of Athens. It is located in the same place as it was 25 centuries ago

The Areopagus is a prominent rock outcropping located northwest of the Acropolis in Athens, Greece. Its English name is the Late Latin composite form of the Greek name Areios Pagos, translated "Ares Rock

Anafiotika is a scenic tiny neighborhood of Athens, part of the old historical neighborhood called Plaka. It lies in northerneast side of the Acropolis hill

Landmark Greek Orthodox church with Byzantine architecture known for being the oldest in Athens.

Stop At: Prison of Socrates, 100 metres from the southwestern edge of the Agora, Athens Greece

On the slopes of Filopappou Hill, follow the path to this warren of rooms carved into bedrock. It's said to have been the place Socrates was imprisoned in before his trial in 399 BC.

The Philopappu Monument is an ancient Greek mausoleum and monument dedicated to Gaius Julius Antiochus Epiphanes Philopappos or Philopappus, a prince from the Kingdom of Commagene. It is located on Mouseion Hill in Athens, Greece, southwest of the Acropolis.

“
This tour was delightful from beginning to end . Our guide was full of factual and fun tidbits . She didn’t go to slow or to fast . Our picnic lunch with wine was delicious.”
Paul • Submitted 19 Sep 2019

“
Fantastic day. Guide was very knowledgeable and accommodating. We will certainly use them for any trips to Greece.”
Erin D • Submitted 29 Jul 2019

“
What a highlight of our trip to Greece! Marissa was very knowledgeable and personable. We watched the Changing of the Guard with no one around, visited Hadrian's Arch, strolled through the three tiers of Plaka, and enjoyed a yummy lunch with views of the Acropolis among other sites. A great way to get acquainted with Athens!”
Janelle P • Submitted 05 Nov 2018

“
Great tour to do at the beginning of your trip to get the lay of the land. Tour guide was extremely knowledgeable.”
Jessica A • Submitted 26 Oct 2018

“
We had Marissa spelling? as our tour guide and we cannot fault her. She was fantastic and she ensured that we were provided with the best tour possible. Out of everything we did in Athens, this was definitely a highlight. The tour itself is perfect to see all the things you never knew you wanted/planned to see. Photo opportunities are abundant and the information she gave us was really educational - Loved it! Thank you for an amazing morning!”
sarahmoore • Submitted 20 Sep 2018

“
This tour was amazing, the guide was knowledgeable and it ended up being just my group of friends! We took some great pics and really enjoyed the tour - would recommend.”
Angel H • Submitted 16 Jul 2018

“
Efi was fantastic, she's an archeologist! She was interesting, informative and fun. Wonderful tour, historical buildings, churches, park, zoo, prison, beautiful old sights, the guards and so much more! A nice relaxing pace and a delicious lunch too! Our favorite tour in Greece!”
Ron S • Submitted 30 Jun 2018

“
loved our guide and great alternative tour -if you have a second day in Athens recommend it and do ask them to take you to the actual Olympic stadium .”
dluckenbach • Submitted 23 Jun 2018

“
An incredible way to finish our weekend in Athens! My brother and I were lucky enough to have Efi as our guide, who despite us being half an hour late, was very gracious and patient with us all throughout the tour. We were not aware that they were holding their annual marathon during the weekend we were there a lot of the streets were closed and our Uber was really held up. Please look up beforehand if there will be any such closures during your trip, and plan accordingly! Don't be late like we were! Efi went above and beyond to answer our questions that encompassed many other areas of Greek society, and we really appreciated her effort to accommodate them all. Our awesome experience in Athens would not be complete without her and this tour!”
Nathan A • Submitted 04 Apr 2018

“
This tour will show you how Athens is full of amazing historical stories and cultural riches.”
serdar t • Submitted 17 Mar 2018

“
This was a most amazing tour, and although it was one of the few rainy days in Athens it was a highly recommended experience. Ana was a wonderful and interesting guide and showed us a very different side of Athens. Wonderful views and hidden stairs and alleyways leading to some special treasures. The picnic at the end was the icing on the cake - although because of the rain we took it back to the hotel to eat! I would love to go back and repeat the experience.”
Joy • Submitted 16 Jan 2018

“
This was a fabulous tour. Kostas was great very knowledgeable and he provided us with a great picnic!”
DIANE D • Submitted 21 Nov 2017

“
Unfortunately, I cannot remember her name but our tour which ended up being just my daughter and myself with our guide was really great! We saw parts of Athens that we would never have seen hence the name Hidden Athens. I saw the white houses with blue doors and windows which I thought were only on Santorini. We did a LOT of walking so it was great exercise. The picnic lunch was perfect and our guide was perfect. Please look up our records and pass on to the guide that she was amazing! Obviously, this review is not for posting, unless you edit it with her name....Maricela? Dang it, I cannot remember. Bottom line: I recommend this tour!”
Sallee M • Submitted 14 Nov 2017

“
What a special day our guide provided for us! She shared super interesting information on the history of Greece modern history even! as we walked. Also, she was a lot of fun! Very highly recommended.”
Jane V • Submitted 06 Oct 2017

“
Dont miss this unique tour, as you will walk through many beautiful and unique hidden places of Athens like Plaka and the Hills of Athens. The tour became a private tour for me and my wife with the tour guide because other people did not show up on time. Since We took the afternoon tour, We had the chance to see the sunset from the Hill of Athens...Amazing places with a very knowledgeable tour guide. Be prepared to wear a good walking shoe, since we have to walk for about three hours.”
Zulkifli Z • Submitted 04 Oct 2017

“
This walking tour was very informative and enjoyable. We were able to see the guards march from the back of the Parliament to the front for the changing of the guards. It was amazing. We also found the Gardens and were given information on some other sites and ruins. It was a great way to get more information in Athens. The Cheese pie, Spinach pie and wine on Falapollis Hill was delicious, with an amazing view. You will enjoy this tour.”
Tazrick • Submitted 20 Sep 2017

“
Effie gave MarieEllen and me a truly insightful and enjoyable walking tour last Monday. An archaeologist, she was a mine of info about Greek Classicsl past its culture religious beliefs and politics, but She was so knowledgeable about everything up to today - helped me to understand Greece today.”
Yvonne P • Submitted 06 Sep 2017

“
It was really a great tour. we learned a lot, and discovered special corners we couldn't be able to do alone. The guide was very informative and very committed to our comfort.”
Okourgi • Submitted 29 Aug 2017

“
This tour allows you to see many things that you would not find on your own. We enjoyed it very much. Our guide was excellent.”
John S • Submitted 10 Aug 2017

“
Very nice tour: Tour went past the President's and Prime Minister's homes behind the Parliament building and then through the National Gardens next to the Parliament building. Went through the ancient Plaka district at the foot of the Parthenon and Acropolis , Toured through areas off the beaten path. Tour guide very knowledgeable and congenial and she bought some food and wine along the way, and we later had a nice picnic. Tour ended in the Monistiraki district next to the Plaka district. Many places to shop in this area, on our own, and have a drink and/or light lunch. Walked back up to our hotel next to the Parliament building and many nice shops and eateries. I would definitely recommend this trip, as our guide added much insight to the tour. Wear comfortable shoes and get ready to do a lot of walking approximately 4 miles, or so. NOTE: We felt very comfortable on our own after the tour. People we met were congenial and police presence was noticeable and welcomed which helps keep down crime rates. All in all very nice tour and overview of Athens.”
Steven I • Submitted 21 Jul 2017

“
This is a different and very interesting trip. Since you are walking, you see things you dont see in a vehicle. Miss Efi, our guide, was very knowledgable about the sites. It was about 4 hours, and ended with a light snack and a glass of wine in a pretty park setting overlooking the Acropolis.”
travelman • Submitted 13 Jun 2017

“
The tour was great. Our guide, Thanios, was very knowledgeable and interesting. The tour far exceeded my expectations. I highly recommend it to see parts of Athens you don't see from busses.”
Janralgi • Submitted 26 Dec 2016