Often forgotten are the brave ANZAC servicemen that died beyond the shores of Gallipoli. Many served and sadly lost their lives along the Mediterranean coastline in Libya, Egypt and Palestine. At the outbreak of the First World War, Cairo was headquarters to the British garrison in Egypt. With Alexandria, it became the main hospital centre for Gallipoli in 1915 and later dealt with the sick and wounded from operations in Egypt and Palestine.

Those wishing to pay their respects to the fallen soldiers are invited to attend the ANZAC Day Dawn Service at the Commonwealth War Memorial Cemetery in Cairo. A member of our team attended this service and shares her experiences below. 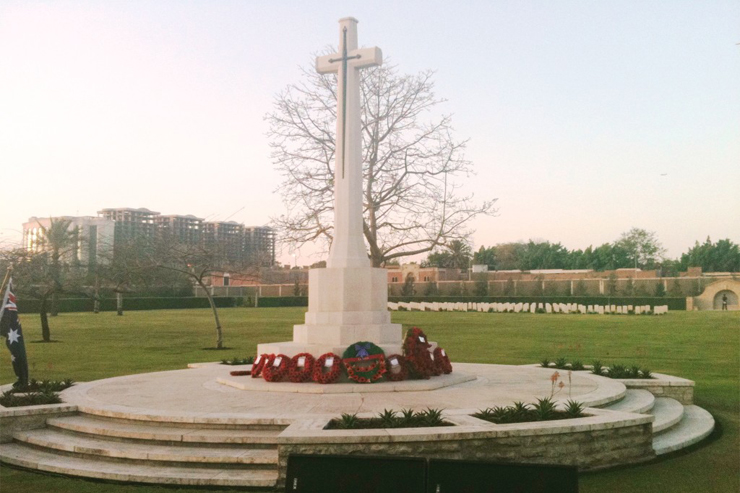 This morning we attended the ANZAC Day Dawn Service at the Commonwealth War Memorial Cemetery in Cairo. This year the commemorations were hosted by Australian Embassy, every other year the services are hosted by New Zealand. On a perfect April morning in the well manicured and candle-lit lawn the services were held and the Last Post played.

The morning is an intimate affair with the Australian Ambassador greeting everyone upon arrival. Australians and New Zealanders living in Egypt, the Ambassador of Turkey, dignitaries from Canada, USA, Pakistan and India amongst others were present as well as a number of tourists in Egypt on holiday, and members of the Australian and New Zealand contingents serving with the Multinational Force and Observers, Sinai, Egypt.

This is a truly unique experience and a chance to pay your respects to the fallen, not to be forgotten.

If you are in Egypt on ANZAC Day then consider coming along. The Commonwealth War Graves Cemetery is located at:

You might also like to visit the War Memorials of El Alamein. The Battle of El Alamein marked the culmination of the North African campaign between the German-Italian army and the British Empire during World War II.

Find out more about our range of ANZAC Day Tours, one of which visits both Cairo and Gallipoli.